This is the tale of two men. Which one would you rather be? It’s in a story that Jesus tells. It begins like this: “There was a rich man who was clothed in purple and fine linen and who feasted sumptuously every day. And at his gate was laid a poor man named Lazarus, covered with sores, who desired to be fed with what fell from the rich man’s table. Moreover, even the dogs came and licked his sores.”

Well, this is quite a contrast between these two guys. Which one would you rather be? I think we’d all agree, we’d rather be the rich guy in this story. He’s got it all going for him, doesn’t he? He’s got all the food and clothing you could want, and a nice place to live. He’s got it made in the shade.

It says he’s “clothed in purple and fine linen.” Now these were very expensive fabrics. Not many could afford them. It would be like today a man who could afford custom-made suits of the highest quality. And to eat, it says that this rich man “feasted.” No, wait, more than that, it says he “feasted sumptuously.” No, wait, even more, it says he “feasted sumptuously every day.” Jesus is really piling on the phrases here to show how this rich man was piling up the rich delicacies on his plate. It would be like having a gourmet meal, prepared by a master chef, not just for a special occasion, but like for dinner every night. And what about where this rich man lived? It says he has a gate, which suggests he is living in a mansion at some big estate. We could say he was living in a gated community, except it doesn’t sound like he was interested in much of a community. He seems to be pretty turned in on himself. The gate served a purpose in keeping the riff-raff out, I guess.

But one of those riff-riff lived right outside the gate. That’s the poor man in the story, the one you wouldn’t want to be. I mean, look at what a lousy life this guy has! He has to be laid at the gate. He’s laid at the gate of the rich man because that would seem to be a good place to beg, but the rich man doesn’t seem to be helping him. He doesn’t have anything to eat. His body is covered with sores. And he’s so helpless, he can’t even stop the street dogs from coming and licking his sores. This guy is in bad shape. You wouldn’t want to be him. 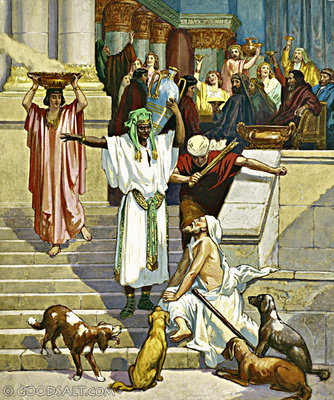 The poor man in this story doesn’t have a whole lot going for him. He doesn’t have food. He doesn’t have nice clothing. He doesn’t have decent shelter. He doesn’t have his health. But there’s one thing he does have. He has a name. His name is Lazarus. That’s what jumps out at you in this story. This man is given a name. That’s unusual in the stories that Jesus tells. Now “Lazarus” would have been a fairly common name back in those days. Jesus even had a friend named Lazarus that we read about elsewhere in the gospels. The name “Lazarus” is another way to say the Hebrew name “Eliezer.” And “Eliezer” literally means “My God is help” or “My God helps.” Or to put it more simply: “Lazarus” means “The one whom God helps.” And that’s the name Jesus gives the poor man in the story. You see, the rich man wasn’t helping Lazarus. Nobody else was helping Lazarus. But God will help him. Lazarus is the one whom God helps. 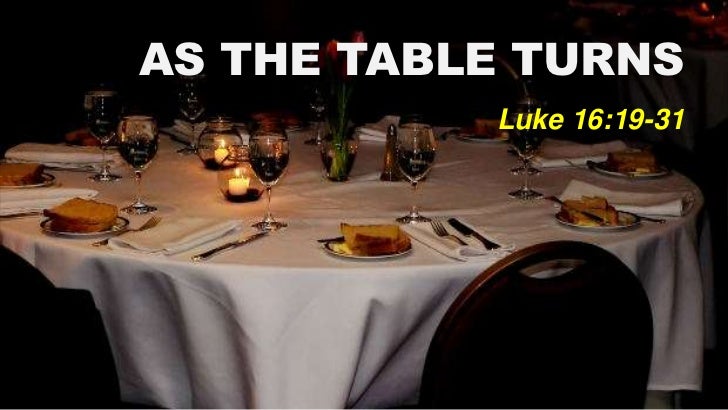 No, it says the rich man died and was buried, “and in Hades, being in torment, he lifted up his eyes and saw Abraham far off and Lazarus at his side. And he called out, ‘Father Abraham, have mercy on me, and send Lazarus to dip the end of his finger in water and cool my tongue, for I am in anguish in this flame.’ But Abraham said, ‘Child, remember that you in your lifetime received your good things, and Lazarus in like manner bad things; but now he is comforted here, and you are in anguish. And besides all this, between us and you a great chasm has been fixed, in order that those who would pass from here to you may not be able, and none may cross from there to us.’”

Now the rich man finds himself in a different place. Before, he had a gate to keep out the riff-raff. Now there is a great chasm fixed, to keep him from getting into heaven and to keep any help from getting to him. Before, he was known as “the rich man.” Now he’s not called that anymore. Now he’s just “The Man Formerly Known as Rich.” Before, he was living in the lap of luxury and feasting sumptuously every day. Now he is in Hades, in anguish, and he doesn’t have any water to cool his tongue.

And this is not the only place in the Bible where Hades, or hell, is described in this way. It is a place of anguish, of torment. And it is eternal. A great chasm has been fixed between heaven and hell, and after death, there is no crossing over. As it says in Book of Hebrews, “It is appointed unto man once to die, and after that the judgment.” There is no purgatory, where you can work off your sins or have some relative or saint pay them off for you. No, once you die, by then it’s too late.

Part of the anguish for the rich man–the formerly rich man–is that he realizes this. He now knows that it’s too late for him. So he makes a request for his relatives who have not died yet: “And he said, ‘Then I beg you, father, to send [Lazarus] to my father’s house–for I have five brothers–so that he may warn them, lest they also come into this place of torment.’ But Abraham said, ‘They have Moses and the Prophets; let them hear them.’ And he said, ‘No, father Abraham, but if someone goes to them from the dead, they will repent.’ He said to him, ‘If they do not hear Moses and the Prophets, neither will they be convinced if someone should rise from the dead.’”

In other words, if you’re so concerned about your brothers not ending up in hell like you, well, they have the same means to prevent them from going there that you had, namely, the Holy Scriptures. “Moses and the Prophets,” that’s a way of saying what we call the Old Testament, which was the extent of the Bible at that time. Moses and the Prophets were enough to keep the rich man and his brothers from going to hell. For Moses and the Prophets warn against being turned in on yourself. They warn against an inordinate desire for riches and wealth. They warn against forgetting God as the source for all your blessings. And the Scriptures warn us against neglecting our neighbor, the poor man at our gate, the person whom God may have placed there, so that we can be God’s channel of blessing and help for that person.

The Scriptures–and we can add the New Testament, too–the Scriptures warn us against all these things. They call us to repent, to repent of our folly. For whether you are rich or poor or somewhere in between, you and I, we all have sins for which we need to repent. We all have failed, each one of us, in our love for God and our love for neighbor. In one way or another, we all are poor miserable sinners, unable to get up, lying outside the gated community called heaven.

But the good news is, inside this gate there is a rich man who will help you. “For you know the grace of our Lord Jesus Christ, that though he was rich, yet for your sake he became poor, so that you by his poverty might become rich.” Yes, Jesus Christ, the eternal Son of God, came down from heaven, came down to where we live, and he suffered and died for you, for your sins. Christ, the truly rich one, emptied himself for your sake. He suffered anguish and torment so that you would not. He was covered with the bloody stripes of beating and flogging. They threw a scarlet robe on him in mockery, and a crown of thorns on his head. Then his clothes were stripped from him. In his hands and his feet and in his side, Christ the Suffering Servant was wounded for our transgressions. On that cross, Jesus cried out, “I thirst.” And then he died and was buried. All this he did for you. He saw you lying there, helpless, dying in your sins, and he came out and took your place. Christ has opened the kingdom of heaven to all believers.

Friends, it is because of this infinitely rich grace of our Lord Jesus Christ that when you die you too will be carried by the angels to Abraham’s side, there to live in heaven forever. Someone did rise from the dead, and it is Jesus. Jesus died and rose again and ascended into heaven, and now he lives forever. And it’s because of him that you and I will receive the help we need, the help that only God can give.

So the rich man and poor Lazarus–which one would you rather be? At first glance, we might say the rich man has it all over poor Lazarus. But those riches are fleeting and will not last. Lazarus has something better. He has a name, and he has a God who will help him. And so do you. Now, in Christ, you can put yourself into this story. For truly your name is Lazarus, “The one whom God helps.”