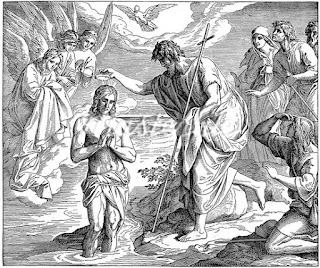 Then Jesus came from Galilee to John at the Jordan to be baptized by him. 14 And John tried to prevent Him, saying, “I need to be baptized by You, and are You coming to me?”
15 But Jesus answered and said to him, “Permit it to be so now, for thus it is fitting for us to fulfill all righteousness.” Then he allowed Him.
16 When He had been baptized, Jesus came up immediately from the water; and behold, the heavens were opened to Him, and He saw the Spirit of God descending like a dove and alighting upon Him. 17 And suddenly a voice came from heaven, saying, “This is My beloved Son, in whom I am well pleased.”

13 Then cometh Jesus from Galilee to Jordan unto John, to be baptized of him.

Then cometh Jesus to be baptized of him. This is a wonderful humiliation. He does not permit himself to be proclaimed; he does not glorify himself until the Father glorifies him. He waited for the voice to come from heaven:

This is my beloved Son. Christ does not act under these circumstances as we vain fellows do; when we read only a little word, then we take our mouths full, we can not restrain ourselves, we must proclaim it abroad, so that all the world may hear it.

14 But John forbad him, saying, I have need to be baptized of thee, and contest thou to me?

John forbad him. John the Evangelist writes, (John 1:30-33) that John the Baptist had not known Jesus. Answer: He did not know him before his baptism, but he must have had an impression that there was something more in him who was standing before him, than an ordinary man— he had an intimation from the Spirit.

John humbles himself and is willing to subject himself to Christ as a pious man; and again, Christ subjects him self to John; as also pious Christians do.

15 And Jesus answering said unto him, Suffer it to be so now: for thus it becometh us to fulfill all righteousness. Then he suffered him.

To fulfill all righteousness. That is, Thus it becometh us to fulfill all the requirements of the law, in order that poor sinners maybe justified and saved, and thus you must baptize me. Upon this baptism depends the righteousness of the whole world. For, because I bear the sin of the whole world, I must do what God has commanded sinners to do; namely, that they must permit themselves to be baptized by me.

16 And Jesus, when he was baptized, went up straightway out of the water: and, lo, the heavens were opened unto him, and he saw the Spirit of God descending like a dove, and lighting upon him:

The heavens were opened. Heaven, which before was closed, now opens, and becomes a gate and window over the baptism of Christ, that all can look in; and henceforth there shall be no more alienation between God and us. For God the Father himself is present and declares, “This is my beloved Son.”

Spirit descending like a dove. The dove descending was the sign, that the Holy Ghost will not be angry with us, but through Christ will help us to be pious and blessed.

17 And lo a voice from heaven, saying, This is my beloved Son, in whom I am well pleased.

My beloved Son. This is a short sermon, but so rich and broad, that no man on earth can comprehend or entirely understand it to all eternity. For therein the divine Majesty embraces and dispenses all its divine wisdom and understanding, and pours out God’s will and heart, that all that he himself is and can accomplish may be come manifest. But this is infinite and incomprehensible, and yet all embraced in this one person, who is called Christ. It points us only to him, and knows nothing else to preach about but this Christ, who has just been baptized.

Such manner of speech as he employs here, “This is my Son,” we find nowhere else in the Holy Scriptures, where he speaks of only one, or calls a single person his Son (see Hebrews 1:5; Psalm 89:28; Psalm 2:7) But where he calls other persons his sons, there he speaks either of many, or of a whole multitude. With the word, “My Son,” he means, as in Hosea 11:1, the whole people of Israel.

For himself he is not in need of such praise, but herein he is revealed to us, that we also may know, what is to be thought of him; namely, that in this person, (which is revealed to us in human form) are concerned heaven and earth, angels and men, righteousness, life, sin, death, hell, and everything that can be named, which is not God himself.

In whom I am well pleased. Here with he consecrates him also as a priest. By this every thing is excluded, which we can do and under take.

This is a different voice from that on Mount Sinai. The Father says, Here ye have not an angel, prophet, or apostle, but my son and myself, my own heart, and the right, eternal spring and fountain of all grace and goodness.

All this has been done to the honor and praise of the sacrament of Holy Baptism. For it is not a human work, but a great and holy thing. There are great persons connected with it; the Father, who gives and speaks here; the Son, who receives and is baptized; the Holy Ghost, who descends upon the Son, and lets himself be seen in the form of a dove; and no doubt the heavenly choir of the holy angels are there also, who rejoice greatly over this work; for where the Father, Son and Holy Ghost permit themselves to be seen, there the whole host of heaven must also be present. The whole heaven also stands wide open.