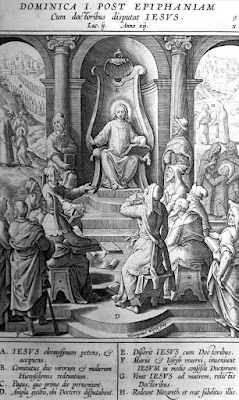 41 His parents went to Jerusalem every year at the Feast of the Passover. 42 And when He was twelve years old, they went up to Jerusalem according to the custom of the feast. 43 When they had finished the days, as they returned, the Boy Jesus lingered behind in Jerusalem. And Joseph and His mother did not know it; 44 but supposing Him to have been in the company, they went a day’s journey, and sought Him among their relatives and acquaintances. 45 So when they did not find Him, they returned to Jerusalem, seeking Him. 46 Now so it was that after three days they found Him in the temple, sitting in the midst of the teachers, both listening to them and asking them questions. 47 And all who heard Him were astonished at His understanding and answers. 48 So when they saw Him, they were amazed; and His mother said to Him, “Son, why have You done this to us? Look, Your father and I have sought You anxiously.”

49 And He said to them, “Why did you seek Me? Did you not know that I must be about My Father’s business?” 50 But they did not understand the statement which He spoke to them.

51 Then He went down with them and came to Nazareth, and was subject to them, but His mother kept all these things in her heart. 52 And Jesus increased in wisdom and stature, and in favor with God and men.

41 Now his parents went to Jerusalem every year at the feast of the passover. 42 And when he was twelve years old, they went up to Jerusalem after the custom of the feast. 43 And when they had fulfilled the days, as they returned, the child Jesus tarried behind in Jerusalem; and Joseph and his mother knew not of it. 44 But they, supposing him to have been in the company, went a day’s journey; and they sought him among their kinsfolk and acquaintance. 45 And when they found him not, they turned back again to Jerusalem, seeking him.

When Christ was twelve years old. Christ did not live in his youth like a rowdy; he did not live a remarkable life, but conducted himself like other children, sometimes also played with his companions, except as the text says, (vs. 47, 52,) that he excelled other children in grace and wisdom.

46 And it came to pass, that after three days they found him in the temple, sitting in the midst of the doctors, both hearing them, and asking them questions. 47 And all that heard him were aston ished at his understanding and answers.

He listened to the scribes at first how they explained the Scriptures, and then reproved them for their wrong explanations, yet in such a way as becomes a young boy. He probably acted as if he had heard it from his mother, or some other older and pious people, and everybody thought the boy had the Holy Ghost, and he would become a wonderful man.

48 And when they saw him, they were amazed: and his mother said unto him, Son, why hast thou thus dealt with us? behold, thy father and I have sought thee sorrowing.

Sought thee sorrowing. This is an example of the cross and great suffering which God permits to come upon his saints. Her heart must have failed, because she first lost the Son, and secondly, that she must have been troubled as regards God, thinking that he no longer wished her to be the mother of his Son, because she had been so negligent in taking care of him. This is just the heaviest temptation and suffering, which is called the withholding of grace, when God permits our hearts to fail, so that we think he would rend the Lord Jesus from our hearts, and our conscience feels that we have lost him. Yea, even, if it is not conscious of open sins, yet the devil can make those things appear to be sins which are not sins; just as here the dear mother feels in her conscience as though she had actually neglected her Son. Why does God permit such things to befall his beloved? First, That he may preserve his own from presumption, so that the great saints, who may enjoy special great grace and gifts from God, should not fall into it and depend upon themselves. Secondly, As an example to others to alarm the secure and to comfort the weak and faint-hearted. Thirdly, He wishes to teach especially his saints how to seek aright and find Christ.

49 And he saith unto them, How is it that ye sought me? wist ye not that I must be about my Father’s business?

How is it that ye sought me? This is now a peculiar thing, that the child Jesus, our dear Lord God, wished to show himself to be under no special necessity to be subject to his mother; but that which he did, he did for an example, out of good will, and all out of a sense of duty. And this example of the child Jesus, our dear Lord, tends to remind us of our ignorance and great blindness, which is constantly inclined to serve man sooner than God. In things pertaining to God we must regard no one, be he father, mother, prince or whosoever he may be.

I must be about my Father’s business. But what is meant by this, “I must be about my Father’s business?” Do not all creatures belong to his Father? All things belong to him, but he has given us the creature for our use. But one thing he has reserved for himself, which is called holy and God’s own, and which we must receive exclusively from him; that is, his holy word, by which he rules and sanctifies the hearts and the consciences. Therefore the temple also was called his sanctuary and holy habitation, because he manifested his presence therein, and let himself be heard through his word. He will show herewith that his government and the whole Christian institution exists entirely in the word and faith, and not in outward things.

50 And they understood not the saying which he spake unto them.

They understood not the saying. Herewith the mouths of the vain talkers are stopped, who extol the holy Virgin and other saints so highly, as if they knew everything and could not err. Such examples show us that also in the saints, who are the children of God, and are highly favored above others, there are yet remains of weakness, by reason of which they often err and fail.

51 And he went down with them, and came to Nazareth, and was subject unto them: but his mother kept all these sayings in her heart.

And was subject to them. Luke mentions finely, “He was subject to them” as if he would say, He did this cheerfully, of his own free will, though he was God, and Lord over Mary and Joseph. And this means nothing else than that he acted in obedience to the fourth commandment. But these are such works of the fourth commandment as the father and mother need in the house, such as bringing water, drink, meat, gathering chips, etc. , etc.

His mother kept all these sayings in her heart. Herewith the Scripture gives us another example, that we should, above all things, cleave to the word; for when it comes to the test, when we are tempted, it is soon forgotten and dropped, even by those who are diligent.