Fifth Sunday After Michaelmas, or the
Twenty-third Sunday after Trinity

Citizenship: Render to Caesar and to God 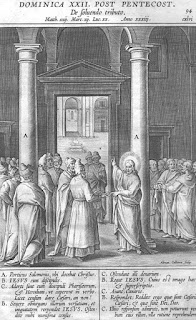 15 Then the Pharisees went and plotted how they might entangle Him in His talk. 16 And they sent to Him their disciples with the Herodians, saying, “Teacher, we know that You are true, and teach the way of God in truth; nor do You care about anyone, for You do not regard the person of men. 17 Tell us, therefore, what do You think? Is it lawful to pay taxes to Caesar, or not?”

18 But Jesus perceived their wickedness, and said, “Why do you test Me, you hypocrites? 19 Show Me the tax money.”

So they brought Him a denarius.

20 And He said to them, “Whose image and inscription is this?”

15 If Then went the Pharisees, and counsel how they might entangle him in his talk.

The two different governments. The principal thing in this Gospel is, that our dear Lord Christ teaches us the difference between the two governments, which we usually call the divine and the worldly government. These governments we should diligently distinguish, and leave every one unmolested in his station and office, so that neither shall condemn the other, as the fanatics do.

How they might entangle him in his talk. A consoling picture is presented to us in regard to the persecutions which befall us from the wicked people in the world, who oppose us with all their power.

16 And they sent out unto him their disciples with the Herodians, saying, Master, we know that thou are true, and teachest the way of God in truth, neither carest thou for any man; for thou regardest not the person of men.

Master, we know that thou art true. It is an especially vexatious thing, that they can make use of flattering words. They call him “Master,” in order that they may remind him of his office, and his duty to give them an answer. They think he is a man, and, just such a preacher as they are, who likes to be heard, tickled and praised.

17 Tell us therefore, What thinkest thou? Is it lawful to give tribute unto Caesar, or not?

Tribute to Caesar. The Jews want to be a free people (see Deuteronomy 17:15; Genesis 49:10; Deuteronomy 28:13) They remembered very well that they were to have their own kingdom. But they paid no attention to their obligation to obey God’s commandments and do nothing against his will.

18 But Jesus perceived their wickedness, and said, Why tempt ye me, ye hypocrites?

Why tempt ye me? Then they think, Now we certainly have caught him, as it were, between two spears; for, if he says, Yes, then we have exposed him as a thief, who steals from God, and is a heretic and an apostate Jew; but if he says, No, then we can accuse him of treason against the imperial majesty and crown, the penalty of which by the laws of all governments is death. Here we can learn that those who claim to be something more than other people, wiser, more powerful, endowed with special gifts of mind, nature, and fortune, are mostly against God and faith, and rely more upon their strength and reason, than on God. The cunning and perverseness of human nature is here very clearly depicted.

Such double-faced knaves are ye, says Christ, that ye seek not “the wayof God and the truth,” (v. 16,) and yet you would like to appear as though you did, and deceive me with false praise. But, as you do not wish to hear that truth by which you can be saved, then ye shall hear that truth which reveals and condemns your knavery.

19 Show me the tribute money. And they brought unto him a penny.

The tribute money. Here is another wisdom of which they knew nothing, and which they did not anticipate, which is called the wisdom of God; for he wrenches their spear and fork outof their mouth, turns them about, pierces them with both; then he answers them neither yes nor no, but forces them to give the answer by which they rebuke themselves.

20 And he saith unto them, Whose is this image and superscription ?

Image and superscription. He asks childishly and simply, as if he did not know the image and superscription, and could not read, so that they begin to think, Verily now we have him; he is afraid he will flatter the emperor, he dares not speak against him. But he takes the word out of their own mouth, so that they must surrender by their confession. Just as they asked him to answer, so, now he asks them to answer.

21 They say unto him, Caesar’s. Then saith he unto them, Render therefore unto Caesar the things which are Caesar’s; and unto God the things that are God’s.

Give to Caesar. He says, You your selves confess that you have done it. What kind of people are you, that you do a thing, and afterwards, when you have already done it, begin to ask whether it is lawful?

And further he says, You want to take away from the emperor what is his, and have long ago taken away from God what belongs to him. Therefore you are in the first place rebels against Caesar, and secondly also shameful robbers of God; for those are robbers of God of whom the prophet Jeremiah says, They do not teach the word right, and withhold it from the people, and thus rob God of souls. (Jeremiah 23:11ff)

But we are to learn two things from this history. The first is, that we should learn to see our own naughtiness from the example of the Jews. For we all, without exception, are so disposed, that we like to com plain when we feel what hurts us; we also think that injustice is done us. It is true, that he who can retain his rights by proper means and ways, does no evil thereby; for judgment and right are ordained by God him self, that we may seek and find them. But where we cannot obtain justice, there let every one beware, that he does not complain much, or become impatient.

Also, you must not revile the government, when you are sometimes oppressed by princes and tyrants who abuse their power which they have received from God; to whom they will, indeed, have to give an account of their deeds. The abuse of a thing does not make a thing bad that is good in itself. Thus it is also with this word, “Render unto Caesar what is Caesar’s;” from the subjects are taken body and goods, and given to Caesar, as we read clearly in 1 Samuel 8:11-17; Daniel 2:37-38, what are the rights of the king. On the other hand, the government should also be told how it should conduct itself towards its subjects. For he did not here say, Give to Caesar what he wants, but what belongs to Caesar.

What is God’s. That is, nothing but faith in God, and love to the neighbor. For God does not want our money, body or goods, but he has reserved for himself our hearts, which is the greatest and best in man. From such a service Caesar and worldly government shall not hinder us. If they would take away from us the Gospel, we should say, Herein you have no authority; for it is written, “We must obey God rather than man.”

22 When they had heard these words, they marvelled, and left him, and went their way.

They marvelled. This is written for our consolation, that we may know that this shall be the fate of all who set themselves up against Christ and his Gospel; and that God will grant us such an answer through his Holy Ghost, that our adversaries shall all come off with shame.