Death and Burial: The Young Man of Nain 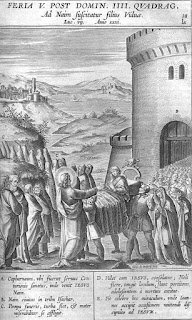 11 Now it happened, the day after, that He went into a city called Nain; and many of His disciples went with Him, and a large crowd. 12 And when He came near the gate of the city, behold, a dead man was being carried out, the only son of his mother; and she was a widow. And a large crowd from the city was with her. 13 When the Lord saw her, He had compassion on her and said to her, “Do not weep.” 14 Then He came and touched the open coffin, and those who carried him stood still. And He said, “Young man, I say to you, arise.” 15 So he who was dead sat up and began to speak. And He presented him to his mother.

16 Then fear came upon all, and they glorified God, saying, “A great prophet has risen up among us”; and, “God has visited His people.” 17 And this report about Him went throughout all Judea and all the surrounding region.

11 And it came to pass the day after, that he went into a city called Nain; and many of his disciples went with him, and much people. 12 Now, when he came nigh to the gate of the city, behold, there was a dead man carried out, the only son of his mother, and she was a widow: and much people of the city was with her.

The two processions. Here you see two processions which meet each other. The one is that of the poor widow with her dead youth, her son, and the people who follow him to the grave; the other is Christ and those who enter with him into the city of Nain. The first picture shows what we are and what we bring to Christ. For this is the picture and course of the whole world upon earth; here is a multitude, who are all on the way to death, and must go out of the city. This is the nature of the whole world; here is nothing but death’s picture and its work.

But you must not look only upon the grave and the coffin; but also on the cause of death. This Scripture shows and teaches that sin and the wrath of God are the cause of death. But these are not only the great actual sins, such as adultery, murder, etc., since those also die who do not and can not commit them, such as the children of the cradle, yea, also the great holy prophets, such as John the Baptist, all of whom must die. Thus also this young man died, not because he was an adulterer or a murderer. (Ecclesiastes 11:9; Psalm 100:12) Therefore there must here be a greater and different kind of sin, on account of which the whole human race hath deserved death; and that is the sin which we have inherited from Adam and Eve. Thus Psalm 90:7 teaches us; it is God’s wrath; this wrath of God is not a simple, trifling thing; but such a severity, which no man can endure. And yet the world is so blind, that it does not see or regard this wrath of God; yea, even the saints do not understand it sufficiently. Psalm 90:11.

13 And when the Lord saw her, he had compassion on her, and said unto her, Weep not.

The Lord had compassion on her. The woman has two misfortunes upon her. In the first place, she is a widow. Secondly, her only son dies also. Among this people it was regarded as the greatest plague, and the greatest disfavor of God, when a father or a mother left no name or children to survive them. Here this thought must also have oppressed her. Behold, thou art also one of those accursed women, with whom God is angry. But here you see what a kindness and grace was bestowed upon this woman by Christ; for this good woman had no thought of ever bringing back her son alive into the city, and therefore she also does not pray for it, much less had she de served it. The unbelief is here, which fights against her prayer, and makes it of no avail; and yet she receives her son again, only because Jesus had compassion on her, so that she must confess it is his pure grace and gift, and that he is such a Lord who can do and give exceeding abundantly above all we ask or think. (Ephesians 3:20.) Accordingly we are also to learn mercy from the Lord Christ; that is, not only to help the neighbor, but his misery shall also excite my compassion as though it were mine own.(Ephesians 3:20.)

14 And he came and touched the bier: and they that bare him stood still. And he said, Young man, I say unto thee, Arise.

He touched the bier. All the works and miracles which Christ wrought visibly and outwardly are to be understood as indicating the works which he performs invisibly and spiritually or internally among men. Therefore this bodily death indicates the spiritual death of the soul. There are two kinds of spiritual death. Some are dead in the soul; but one sees it not as he sees the bodily death, and they themselves also do not see or feel it; in this manner the whole world is dead, but does not feel it. He who feels it not can not be helped. There are, indeed, a few who are spiritually dead and feel it, as the law condemns them. The preachers of the law are the pall-bearers.

When Christ touches a bier; that is, when one preaches the goodness of God, and how Christ bestows upon us his merits and work, this hand is laid on the bier, and then we hear no more preaching of the law. But the voice of Christ in the heart must also be added, so that we may believe the word. The young man does not arise immediately after the touch of the bier, but not till the Lord said, “Young man, I say unto thee, Arise;” this voice touched the heart and caused the dead to come to life.

15 And he that was dead sat up, and began to speak. And he delivered him to his mother.

And the dead arose. From this it follows, that those who lie in the church-yard beneath the earth, sleep much quieter than we in our beds.

And he gave him to his mother. Thus he gives to the widow ten-fold more joy, than she had before; for now she has more joy in one hour, than she had joy in her son during her whole life.

It has the appearance sometimes as though he sided with the ungodly, and persecuted the pious without mercy; but when you hold out faithful to him, a single small word is sufficient for him, and help is at hand, just as he here raised the dead son with one word.

16 And there came a fear on all; and they glorified God, saying, That a great prophet is risen up among us; and, That God hath visited his people.

God hath visited his people. Great joy and thanksgiving now follow. Thus one Christian can bring many to believe.

He turns the sad procession with one word to a beautiful, lovely, and joyful procession of life.

That will, indeed, be a very beautiful, lovely procession, when he shall in one moment bring together all who have died, and lead them with himself as their head. 1 Thessalonians 4:14ff.