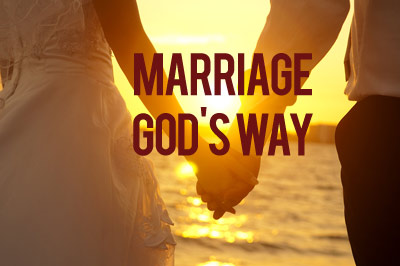 What this sampling of news stories demonstrates is that marriage–and in particular, the disregard for marriage and even the redefining of marriage–that this is a controversial issue, and that marriage is in a severe state of distress and decline in our country. And if you think it’s bad in America, it’s even worse in Europe. But then this is nothing new. Mankind has always messed up marriage, even from the get-go, in various ways and forms. So what we want to hear today, what we need to have our ears open to this morning, is what we find in our Epistle reading from Ephesians 5, namely, “Marriage, God’s Way.”

Marriage, God’s way. Yes, God has something to say about marriage. In fact, it’s his idea. It’s what he instituted for humankind, way back in the beginning, before the fall into sin. God looked at all that he had created, “and God saw that it was good.” But there was one thing that was not good, not yet at least. And that is, that the man was alone. So the Lord God said, “It is not good that the man should be alone; I will make him a helper fit for him.” So the Lord God made a woman and brought her to the man. “Therefore,” the Book of Genesis says, and Paul quotes this verse: “Therefore a man shall leave his father and mother and hold fast to his wife, and the two shall become one flesh.” This was God’s institution of marriage. It is our Creator’s good design for his human creatures. Marriage is a good thing, very good, when done God’s way.

However, it didn’t take long for man to mess this up. You know the story. The devil tempts the woman to go against God’s command. Her husband goes along with the temptation. They realize their shame and they try to cover it up. God sees what they have done, so what do they do when God confronts them with their sin? They try to shift the blame. Adam says: “The woman you gave me, Lord, she gave me fruit of the tree, and I ate.” Then the woman says: “Uh, the devil made me do it.” This is the blame game. Lack of harmony between husband and wife.

Then the Lord pronounces a curse on mankind. Part of that curse for the woman is this: “Your desire shall be for your husband, and he shall rule over you.” That is, conflict between the wife and the husband over who’s in charge. And to the man, God says: “Because you have listened to the voice of your wife and have eaten of the tree of which I commanded you, ‘You shall not eat of it,’” and so on. In other words, Adam should have known better. The Lord had given the command directly to him, but Adam abdicated his spiritual headship in the matter and went along with the temptation. So there’s sin and curse and conflict now entering into the estate of marriage. And it continues to this day.

What are some of these departures and deviations from God’s good estate of marriage that we see today? Well, they are many. We mentioned the notion that there can be such a thing as same-sex “marriage.” But that is an impossibility, no matter what five Supreme Court justices may say. The Supreme Being outranks the Supreme Court, and God has already spoken on this issue. “We must obey God rather than men,” Acts 5:29.

So now the homosexuals want to get married, but the heterosexuals don’t! Cohabitation, living together outside of marriage, shacking up–call it what you will, but this sin is pervasive in our society. And yes, living together outside of marriage is a sin. I don’t care if your adult children are doing it, I don’t care if your friends and neighbors are doing it, it’s still wrong. It’s still avoiding and despising what God has instituted, and that is marriage. So this is another departure from God’s good order. Then there’s divorce. Easy divorce, so-called “no-fault” divorce, as though there could be such a thing–this too is a breaking of God’s good command. “What God has joined together, let no man–or woman–put asunder.” But the putting asunder of marriage, the breaking of the sacred marriage vows–this is so common now, and has been for decades, that people are bailing out of marriage for no good reason, just whenever they feel like it. This too is wrong.

Then of course there are the obvious sins–or what used to be obvious sins: adultery, extramarital sex, premarital sex, and so on. All these ways we go against what our Creator has provided for our good.

Now perhaps you are sitting there, thinking, “Well, I’m glad I haven’t committed any of these sins. I’m not having a same-sex marriage. I don’t even condone it! It’s a disgrace!” “Well, I’m not shacking up with anybody.” “I haven’t caused a divorce.” “I haven’t had an affair.” Well, good for you. But that doesn’t mean you are without sin in this matter. Jesus said that even if you look at a woman with lustful intent, you have already committed adultery with her in your heart. And there are corresponding sins for women also.

So none of us here is as pure as the driven snow. We all have sinned and fall short of the glory of God. But there is good news for you today: “Though your sins be as scarlet, they shall be as white as snow.” Confess your sins before God, and the blood of Jesus his Son will cleanse you from all your sins. You and I, we have washed our robes in the blood of the Lamb. Dear baptized believers in Jesus Christ, you are clean, you are forgiven, for the sake of Christ! Jesus Christ, God’s own Son, died for all your sins. They are covered by his holy blood. They are washed away in your baptism. Cling to this. Cling to Christ. Paul says in our Epistle: “Christ loved the church and gave himself up for her, that he might sanctify her, having cleansed her by the washing of water with the word, so that he might present the church to himself in splendor, without spot or wrinkle or any such thing, that she might be holy and without blemish.” That’s about Christ and us, his church. We are cleansed in Holy Baptism, that “washing of water with the word.” It’s like we sing in the hymn: “The Church’s one foundation is Jesus Christ, her Lord; she is His new creation by water and the Word. From heaven He came and sought her to be His holy bride; with His own blood He bought her, and for her life He died.”

And so it is in that perspective now, that we can take another look at marriage–marriage, God’s way. That’s what Paul is talking about in our text. And we need to hear what Paul writes in that context, that is, in the context of our new nature in Christ, in terms of the marriage of husband and wife reflecting, and bearing the image of, the relationship of Christ and his bride, the church. When marriage reflects that character, it works great. But when either party, or when both parties, step out of that “Christ and the church” type of relationship, then conflict arises and marriage goes sour. Keep that in mind when you hear what the apostle Paul writes.

“Wives, submit to your own husbands, as to the Lord. For the husband is the head of the wife even as Christ is the head of the church, his body, and is himself its Savior. Now as the church submits to Christ, so also wives should submit in everything to their husbands.” Well, if this is not the most hated passage in our culture today, I don’t know what is. “Wives, submit to your husbands”?? I mean, come on! But yes, this is what God’s word says, here and in other places. But notice, Paul is not saying, “Husbands, make your wives submit to you!” No, instead, this is directed to the wives. “Wives, you voluntarily submit yourself to your husband’s headship. And this is as the church submits to Christ–gladly, willingly.”

And notice what Paul then immediately says to the husbands: “Husbands, love your wives, as Christ loved the church and gave himself up for her.” Men, this is what God is saying to you. Love your wife. Give yourself up for her. This is the kind of Christ-like headship and leadership you should be exercising. Just as the Son of Man came, not to be served, but to serve. Therefore, “let each one of you love his wife as himself, and let the wife see that she respects her husband.”

Friends, this is how God designed marriage to work. This is how it works best, when there is mutual love and respect: Wives voluntarily and willingly submitting to and respecting their husband’s Christ-like headship. And husbands loving their wife as Christ loves the church–which is a whole lot, even to the extent of laying down his life for her. When both parties are living in marriage in this way, God’s way, it’s a beautiful thing. And where that is not happening from time to time–and that will be the case in any marriage, for we are still sinners too, and the closer you live with someone, the more opportunities there are to rub the other person the wrong way and to get on one another’s nerves–in those cases, and at those times, that’s where forgiveness comes in, and bearing with one another, even as we pray, “Forgive us our trespasses, as we forgive those who trespass against us.”

Dear Christians, marriage may be all messed up in our society, but it need not be so among us. For we know the love of Christ, our Savior: his forgiving power, which cleanses us from our sins, and his baptismal grace, which lifts us up to newness of life in him. And this love and this grace is what enables us now to do “Marriage, God’s Way.”