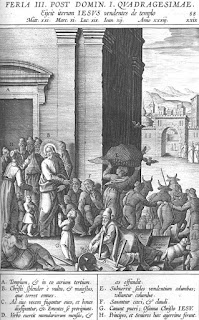 41 Now as He drew near, He saw the city and wept over it, 42 saying, “If you had known, even you, especially in this your day, the things that make for your peace! But now they are hidden from your eyes. 43 For days will come upon you when your enemies will build an embankment around you, surround you and close you in on every side, 44 and level you, and your children within you, to the ground; and they will not leave in you one stone upon another, because you did not know the time of your visitation.”

45 Then He went into the temple and began to drive out those who bought and sold in it, 46 saying to them, “It is written, ‘My house is a house of prayer,’ but you have made it a ‘den of thieves.’”

47 And He was teaching daily in the temple. But the chief priests, the scribes, and the leaders of the people sought to destroy Him, 48 and were unable to do anything; for all the people were very attentive to hear Him.

41 If And when he was come near, he beheld the city, and wept over it,
42 Saying, If thou hadst known, even thou, at least in this thy day, the things which belong unto thy peace! but now they are hid from thine eyes.

Jesus wept over Jerusalem. As the Lord drew near to the city, the people preceded and followed him, singing with great joy, and saying, “Hosannah to the Son of David.” In the midst of the rejoicing he begins to weep; he lets all the world be joyful, but he weeps when he sees the city.

This is especially to be noticed, that the Lord says, “But now they are hidden from thine eyes.” For thus it usually happens, that one thinks God will not punish; but be cause God in mercy delays and waits for reformation, the world imagines that he will always keep silence.

43 For the days shall come upon thee, that thine enemies shall cast a trench about thee, and compass thee round, and keep thee in on every side,
44 And shall lay thee even with the ground, and thy children within thee; and they shall not leave in thee one stone upon another; because thou knewest not the time of thy visitation.

The day of thy visitation. Visitation means in the Hebrew language, when God comes to us and knocks, bringing with him all his divine gifts. (See Luke 1:68.) As if our dear Lord Christ would say: One sin breaks thy neck, O Jerusalem, that thou hast not known thy gracious God, nor accepted him, and hast despised and ridiculed my paternal, faithful visitation. To “know” here means not only to see with our eyes, as the cow sees the door; but to be heartily interested in a thing, as the Scripture usually speaks. Gen.4:1.

Since God did not spare the splendid, highly favored city, because she had God’s word and did not reform, let every one desist from sin in time, otherwise the punishment and wrath will most certainly follow.

The Lord does not speak here of all the other sins, but censures only this one, that they not only lived securely, disregarded the admonitions and threatenings of the prophets, but also persecuted them. For it is no wonder that we sin; but to defend sin and remain impenitent and obdurate, this God cannot permit; sooner everything must go to ruin. See John 3:19.

45 And he went into the temple, and began to cast out them that sold therein, and them that bought;
46 Saying unto them, It is written, My house is the house of prayer: but ye have made it a den of thieves.

Christ’s chief concern. Here the Lord shows what he cares for and what concerns him most, which also caused him to weep; namely, that the word of God and the proper worship of God were very much suppressed and destroyed, and this was done even by those who should have been the heads and teachers, for the sake of their abominable avarice and their own pride.

My house is a house of prayer. For king Solomon also, who built the temple, (though he also offered sacrifices therein) founded it especially for the purpose of prayer; and particularly that in time of distress prayer should be offered, when they were punished on account of their sins, as he says in 1 Kings, chapter 8. But now they do not teach the people how they should pray, but have changed it into a smoke (raeuch- haus) and slaughterhouse. Although God could also have endured this, if in addition they had prayed, or taught the people how to pray. But they insisted only on the sacrifice. Herewith the house became nothing but a den of thieves. For thereby they ruined the poor souls by not teaching them to pray and call upon God. Therefore as merciful and compassionate as he showed himself toward the multitude of poor people, who were so miserably led to their destruction, so great wrath did he show to those who were the cause of such destruction. Because they themselves destroy God’s kingdom, he will no longer build theirs. He will destroy all that he has built up in them. The prelude of this destruction he began on the day in which he raised such a rumpus in the temple.

47 And he taught daily in the temple. But the chief priests and the scribes and the chief of the people sought to destroy him,
48 And could not find what they might do: for all the people were very attentive to hear him.

Chief priests sought to destroy him. As they endure such violence and damage in silence, it is evident, that the Lord spake just such a word to them, as he spake to the Jews in the garden of Gethsemane, when they turned back and fell to the ground. (John 18:6.) We should be very slow in following Christ in this thing. Therefore no one should interpret this history to the effect, that the preachers should lay violent hands on, and use force as Christ did here.

For if Christ had not intended to use more than human power in this matter, he alone would not have accomplished much against so many others.