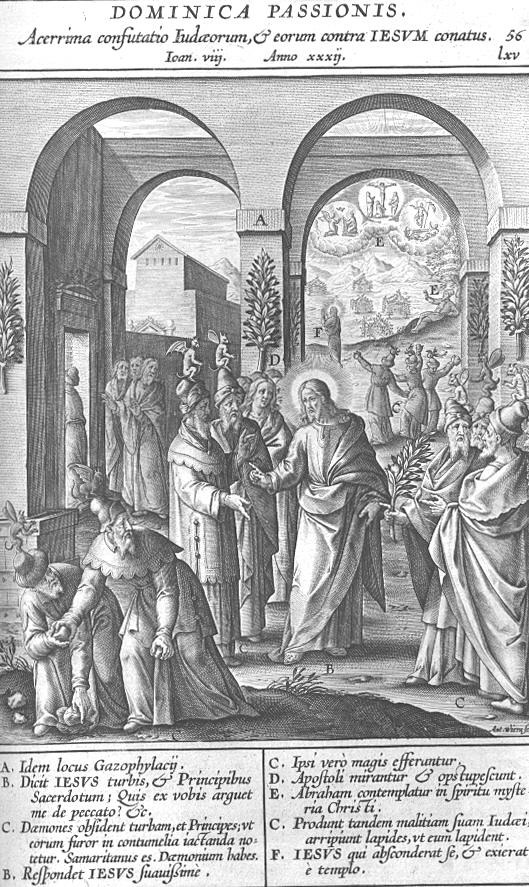 Passiontide (Passionalia) is the historic name for the last two weeks of Lent. From ancient times these two weeks were called “The Great Week” (Μεγάλη Εβδομάδα) and “Passion Week”. It was not only the last week as Holy Week, but the fourteen days from Passion Sunday until Holy Saturday.

But is Passion Sunday (Dominica Passionis) the Fifth or the Sixth Sunday of Lent?

This move to incorporate Passion Sunday together with Palm Sunday is new. However, in past three centuries historians from the Western Church have been occasionally confused. Apparently this is due in part to a misunderstanding of the habit of some of the Eastern Church to name some of their liturgical weeks by the title of the Sunday following the week rather than by the title of the Sunday beginning the week.
[see, for instance, Hampson, under Passion Week p. 311]

The Greek term Εβδομάδα Μεγάλη, Hebdomada Megale, Medieval Latin: Hebdomada Magna: the “Great Week.” According to Hildebrand and Hampson the use of these names as an equivalent to “Holy Week” (the seven days from Palm Sunday to Holy Saturday) started after the Reformation. Luther Reed’s evidence may have been incomplete when he wrote that the term “Passion Week is no older than the nineteenth century and originated in Anglican circles.” [The Lutheran Liturgy, p. 496] Reed’s assertion that the term “Great Week” was used by Chrysostom with reference only to the week beginning Palm Sunday (ibid. 497) seems to be based a secondary citation of an observation made by Paolo Diacono in his Historia Romana which was written in 774.

Hildebrand’s De diebus festis libellus (published 1718)  attributes the celebration of Passion Sunday to Pope Alexander I (died 115) and states that Ignatius had mentioned the Great Week in his Letter to the Philadelphians. [p. 62] [alternatively at google books] Unfortunately, the texts or versions of these writings available now do not seem to support this.

Egeria (St. Silvia of Aquitania) wrote her travelogue Itinerarium Egeriae about her tour of the holy land in 381-383. In this she gave a fairly detailed description fast of the Forty Days of Lent (Lat: Quadragessima; Gk: Μεγάλη Τεσσαρακοστή), including the Great Week (two weeks before Easter), and Palm Sunday. (p. 57ff).

By the 10th century in England the terminology and observance of Passiontide/Passion Week was already considered an old established church Practice. English Abbot Ælfric of Eynsham (c. 955 – c. 1010) of the Cerne Abby called the two weeks by the term Christes ðrowung-tíd, Christ’s Passion-Tide. The opening paragraph of his Sermon for Passion Sunday “The Fifth Sunday in Lent” says:

THIS tide from this present day until the holy Easter-tide is called Christ’s Passion Tide, and all God’s ministers in the holy church with their church-services honour, and in remembrance hold his passion, through which we were all redeemed. Our books also say, that we should hold these fourteen days with great earnestness, on account of the ap- proach of the holy passion and honourable resurrection of our Saviour. On these days we omit in our responses ‘Gloria Patri,’ on account of our lament for the holy passion, unless some high festival-day occur during them.
[Aelfric, Abbot of Eynsham translated by Thorpe, Benjamin, 1844, Sermones catholici, or, Homilies of Aelfric, Vol 2, p. 224f]

Both the Western Rite [Gregorian] and the 11th century Use of Sarum [England] were the main liturgical traditions out of which both the Anglican and Lutheran liturgical year grew.

The Gospel Lessons in the Historic Lectionary from Lent 1 to Lent 3 have focused on the Authority of the Son of God over Satan and demonic powers. On Lent 4 (Lataere) the focus is on Christ as the Angel of the Lord who delivered His people from Egypt and provided bread for them in the wilderness.

From Lent 5 (Judica/Passion Sunday) the persecution and punishment of Christ takes center stage. The focus of the Gospel lesson (John 8:46-59) turns to face what is coming on Good Friday. On Lent 5 is Christ’s public confession that He is יהוה the LORD, the “I AM”. And here is where “they took up stones to throw at Him.”

Though the particular lessons varied from region to region, the general arrangement came together by the middle-ages. And even the variation that existed by the time of the Reformation tended to emphasize the same themes for each week.
[see Nicholas Nilles Kalendarum v.1 sec. 2 for comparison and development of Eastern and Western traditions]

The season of Lent itself had been formally tied to catechesis in canon law also by the time of the Council of Laodicia (363-364) [Canons 45-52].

The LSB follows the ICLW arrangement for moving the name Passion Sunday to the date of Palm Sunday–even in the One Year Series (Historic Lectionary). However, even with the name move, LSB keeps the historic Passion Sunday (Judica) texts with Lent 5 in the One Year series. The editors of the LSB have gone to the work to put together a seasonally well coordinated set of readings for the major festivals of the Church year. The Lenten readings are found starting page 299. These readings are coordinated with the Treasury of Daily Prayer.

The Treasury of Daily Prayer does not include a discussion on Passion Sunday in its words on the Church Year (p. 10f), nor at the place of the devotions on Lent 5 (p. 132) or Palm Sunday (p. 156).

ELH retains the historic Passion Sunday texts with Lent 5 in its listing of the Historic Lectionary (pp. 202f). But the name of Passion Sunday is missing from this list. Neither is it included in the ILCW listings in the pages before this. ELH has a selection of hymns specifically for Lent 5 focusing on Jesus, Our High Priest (270-276). And a separate section on the Passion of Christ (281-308) which follows the hymns on Palm Sunday (277-280).

A listing of lessons for Passiontide based on the Historic Lectionary in the ELH and LSB, the Use of Sarum, the Book of Common Prayer, and the pre-Tridentine Breviary.