You’ve heard of Christmas trees. But have you heard of “Advent trees”? No? Well, I hadn’t either. In fact, I just made that term up as I was thinking about our lessons for today. For in both the Holy Gospel and the Old Testament Reading, there’s quite a lot of “tree” talk going on: “tree,” “root,” “fruit,” “shoot,” and so on. It’s like an Advent arboretum. So let’s see what we are to make of all this, under the theme, “Advent Trees.”

We’ll start in the Holy Gospel from Matthew 3. There John the Baptist uses tree language quite a bit. He sees some of the Pharisees and Sadducees coming out to where he was baptizing, and he says to them: “You brood of vipers! Who warned you to flee from the wrath to come? Bear fruit in keeping with repentance. And do not presume to say to yourselves, ‘We have Abraham as our father,’ for I tell you, God is able from these stones to raise up children for Abraham. Even now the axe is laid to the root of the trees. Every tree therefore that does not bear good fruit is cut down and thrown into the fire.”

We’ll call these Advent trees “John the Baptist trees.” These are trees that, on the one hand, are in danger of being chopped down and cast into the fire. That’s not good. On the other hand, there are some other John the Baptist trees that sound like they’ll be OK, that they won’t be chopped down and burned, but instead these are the trees bearing fruit, good fruit, fruit in keeping with repentance. So which is it? What kind of a tree are you?

You see, there is a wrath coming, the wrath of God against sinners, like a big heavy axe laid at the root of the trees. Judgment is coming, divine judgment, end-time judgment, and John is warning us that it’s on the way. How will we escape?

Will it be through priding ourselves in our own goodness, our own righteousness, that we are better people than the bad people, those who aren’t nearly as religious and devout as we are? Will it be through priding ourselves in our religious ancestry–“We have Abraham as our father”; “We have Luther as our father”; “We have Walther”–that is to say, to have the ancestry apart from the faith of those esteemed forefathers? That type of hypocritical, religious pride was the approach of the Pharisees and the Sadducees. Yet John the Baptist sees them coming and greets them by saying, “You brood of vipers!” which is to say, “You sons of snakes!” That doesn’t sound like John thought very highly of their attitude. He didn’t. He denounces it in the strongest terms. This is not the way to approach God. That ain’t gonna cut it. In fact, you will be cut down, if you try to come to God like that.

On the other hand, there were other people coming to John, and these he does not turn away. These are ones coming confessing their sins, coming to be baptized. They had heard John’s message, “Repent, for the kingdom of heaven is at hand,” and they were heeding it. They were taking it to heart. This is what it means to bear fruit in keeping with repentance. These are the Advent trees, the John the Baptist trees, who will not be cut down. Quite the opposite. They will be gathered in, safe and sound, when the Lord comes and collects his harvest, and separates the wheat from the chaff.

How about you, do you have sins to confess? How have you broken God’s commandments, whether in thought, word, or deed, by what you have done or by what you have left undone? Go down the list: having other gods; treating the Lord’s name as a light thing; not keeping the Lord’s Day sacred; dishonoring the authorities God has placed over you; not caring for your neighbor; not honoring marriage; not respecting your neighbor’s property; damaging your neighbor’s reputation; coveting, coveting, and more coveting. Are you going to repent of these sins, confess them, and let them be drowned and die, as you daily die and rise with Christ as a baptized Christian? Or will you instead cling to your sins, hide them away, pretend they aren’t there? Will you fool yourself into thinking that either a) they aren’t so bad, or b) there isn’t any wrath or judgment coming, or c)–and this is probably the favorite excuse of Christians when we try to rationalize our sinful behavior–c) God will just forgive me later, so I’ll go ahead and do what I want anyway. Friends, this is not fruit fit for repentance. This is dangerous thinking.

John the Baptist, God’s preacher of repentance, is calling out to us today: “Repent, for the kingdom of heaven is at hand.” Heed this admonition. God would have you be the Advent tree that bears good fruit, fruit in keeping with repentance.

John the Baptist is also God’s preacher of good news, a preacher of forgiveness, pointing us to our one and only hope. John here speaks of one “who is coming after me,” who is “mightier than I, whose sandals I am not worthy to carry.” You know who this “coming one” is, don’t you? It is Jesus, our Savior. It is because of him, this one to come, that you and I will escape the wrath and judgment to come.

And this is where our other Advent tree comes in, the one spoken of in our Old Testament lesson today, from Isaiah 11. Isaiah also uses “tree” language, when he speaks of “root” and “fruit” and “shoot,” as he does here: “There shall come forth a shoot from the stump of Jesse, and a branch from his roots shall bear fruit.” And again later: “In that day the root of Jesse, who shall stand as a signal for the peoples–of him shall the nations inquire, and his resting place shall be glorious.”

OK, a little background. This Jesse fellow was the father of the great King David. And David, in turn, was the father of a whole line of kings, all those reigning after him in Jerusalem. But to say “Jesse” is to emphasize the humble origins of this Davidic kingly line. There was nothing special or spectacular about this Jesse fellow that made you think “king.” It was all due to God’s choosing that David and the rest of the kings would come from Jesse. So that’s in play here–namely, the humble origins of the kingly line–when the prophet speaks of the “root of Jesse” or a “shoot from the stump of Jesse.” 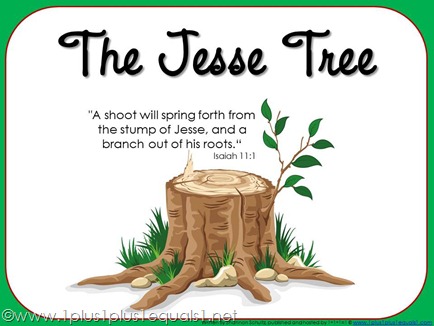 And why does he speak of a “stump”? Stumps are trees that have been cut off. But that’s the situation that the royal line of David would be in. Davidic kings reigned in Jerusalem for hundreds of years, from the time of David himself, around 1000 B.C., down to about 600 B.C. But then the Babylonians conquered Judah, and the last reigning king was taken off into captivity. That was the last time a Davidic king was actively ruling. It was like a tree that had been cut down to a stump. It looked like it was the end of the line, literally. But the physical line of David stayed alive, although none of those descendants did any ruling.

This went on until the time of a Davidic descendant who was born in the city of David, in Bethlehem, hundreds of years later. Finally, then, would come the fulfillment of this prophecy of Isaiah, when a seemingly insignificant little shoot would come forth from the seemingly dead stump of Jesse. That would be Jesus, of course, the Son of David par excellence. The Messiah, the Anointed One, the Christ. Jesus is the one whom Isaiah foretold, that shoot from the stump of Jesse.

But notice, Isaiah calls him not only “the shoot from Jesse,” he also calls him “the root of Jesse.” What’s that about? Well, this is getting at the person of Christ as the eternal Son of God, the one whose origins go way behind even Jesse. Christ himself is the root of Jesse, the beginning, the source, the origin. The fact that God would choose Jesse and David and have a line of kings coming from them–this was all in order to lead up to God’s own Son coming in the flesh to be the great Messiah. Jesus is both the root of Jesse and the shoot from Jesse. True God and true man, in one person, namely, Jesus Christ.

So let’s call this Advent tree in Isaiah the “Jesse tree.” Hey, now I have heard of a Jesse tree! Yes, there is that custom, that Advent custom, of displaying a tree adorned with symbols of Christ, or tracing out the genealogy of Christ. So I guess there is something that could be called an “Advent tree,” that is, the Jesse tree. It tells us of God’s plan to bring the Savior into the world, when it looked like all hope had been cut off, cut down to a stump. And then comes this little shoot springing forth from that stump, which, in the mystery of God’s eternal plan, is, at the same time, the root of Jesse. And what fruit he bears, this Savior does! Wisdom and understanding, counsel and might, righteousness, faithfulness. A peaceable kingdom, with no more hurt or destruction. This is the glorious fruit that Jesus bears. This is the kingdom of heaven that Christ opens up for us.

And it comes by way of one more tree, one we haven’t talked about yet. It is the tree of the cross. On that tree our Savior hung, bearing the wrath and the judgment that we deserve. Because Jesus suffered this judgment in our place, we are spared. The tree of Calvary becomes our tree of life. Here is forgiveness for all your sins. Here is salvation from that coming judgment. Yes, cling to this tree, the cross of Christ, and you will be saved.

Dear friends, Christ is coming! The one mightier than John. The shoot from the stump of Jesse. Indeed, the very root of Jesse. In view of his coming, today repent of your sins, bear fruit fit for repentance, and find your forgiveness and your hope in his tree of life.