So we can see there is an anti-God bias affected the way academics and popular writers from that time to today portray Christmas, Easter, Pentecost, Ash Wednesday, and Hallow E’en (All Saint’s Eve) as having “evolved” somehow from pagan origins. 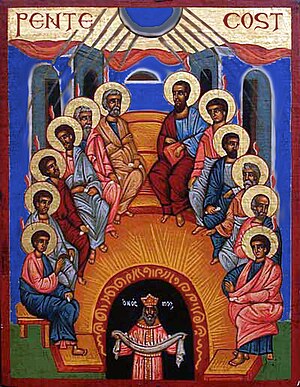 It’s not hard yet to celebrate Christ’s birth. But Christmas is actually the last of the Christian Holy-Days to be widely celebrated through society. Easter is so close to confirmation and graduation with so many other things taking place in the spring that it is so hard to get the family together to celebrate Christ’s resurrection. Both Christmas and Easter have a lot of distractions. The World perverted the memory St. Nicholas to use against the Christ. The World perverted the Christian symbolism of the egg and the rabbit to use them against the Christ.

But where can you or I buy any Pentecost candy, gifts, or cards?

Pentecost was the first of the three main Christian Holy Days lost to the world. Pentecost, like Easter, are New Testament names for Old Testament festivals. Easter is the fulfilled Passover, commanded by God in Exodus 12-14. Pentecost is the festival of Weeks or Harvesting the Firstfruits recorded in Exodus 23, 34, Leviticus 23, Deuteronomy 16, and Numbers 28. The date was set as the day after seven weeks from Passover were completed. That is fifty days. During Christ’s ministry the Greek speaking Jews called it “Day Fifty” or Pentecost. The count of weeks began at the end of the Passover and Feast of Unleavened bread. From the end of that festival they were to count weeks.

There were two very famous historians who tried to claim that Pentecost was a development of the Christian church trying to replace the Roman festival of Ludi Florales. The first author was Joseph Martin McCabe (12 November 1867 – 10 January 1955) a man who fell from faith in Christ and spent most of his life writing against Christ, Christianity, and the Church. He was interested in discrediting Christianity so people would lose faith in God. In his 1903 book St. Augustine and His Age McCabe makes the following bold lies:

“As to the processions and manner of worship in general, the Church was very accommodating: The Saturnalia became Christmas and its succeeding festivals. The purification of Isis became the purification of Mary; the Floralia, Pentecost; and so on.Hymns to Cybele were hastily adapted to the mother of Christ; statues of Horus and Isis quickly became Jesus and Mary. Stately processions once more made their way to the temples, now converted into Christian churches. Lanciani says that many pagan altars were in use in Roman churches until a century ago.” (p. 100-101)

The problem? Well, Pentecost started about 1400 B.C. when God gave the command to celebrate this festival to Moses and Aaron. The Romans instituted Floralia in about the year 238 B.C. That means that Pentecost is about 1,150 years older than Floralia.

The second famous historian, Will Durant, in his landmark series The Story of Civilization had a volume published in 1950 titled The Age of Faith. wrote the following:

“Statues of Isis and Horus were renamed Mary and Jesus; the Roman Lupercalia and the feast of the purification of Isis became the Feast of the Nativity; the Saturnalia were replaced by Christmas celebrations, the Floralia by Pentecost, an ancient festival of the dead by All Souls’ Day, the resurrection of Attis by the resurrection of Christ. Pagan altars were rededicated to Christian heroes; incense, lights, flowers, processions, vestments, hymns, which had pleased the people in older cults were domesticated and cleansed in the ritual of the Church; and the harsh slaughter of a living victim was sublimated in the spiritual sacrifice of the Mass.” (p. 75)

Notice how close Durant’s wording is to McCabe’s wording? This is interesting because Durant credits Sir. J. G. Frazer with the information. Frazer was another anti-Christian writer, an anthropologist, who sought to show how Christianity “evolved” from paganism and into scientific atheistic Rationalism. They all repeat the same words without any real demonstration from ancient documents. In fact, so few of the later writers actually checked the sources that the citation they give from St. Augustine’s City of God is often mistakenly written as if Augustine’s words were found in book eleven (11) instead of book 2 (Roman numeral II ). And Augustine does not say that celebration of Floralia was replaced with or developed into Pentecost. He merely describes Cicero’s account of the lewd sexual acts and perversions the Romans engaged in publicly to celebrate their false goddess. There was nothing in common between the rituals of Foralia and Pentecost.

But we come back to the basic problem with all of these so-called scholars: Pentecost was instituted by God in about the year 1400 BC. This is more than a millennium before this Roman pagan festival began. Notice how desperate those authors were to try to disprove every aspect of Christianity with some pagan celebration. They try to overwhelm the reader with too many pieces of information all at once, swamping and overwhelming the reader who probably doesn’t have the background to question their scholarly authority. But most of the pagan festivals they mention didn’t really exist in the way that they claim.

But the problem they faced was too big to overcome. Pentecost predated the pagan festival by over a thousand years. And they don’t happen on the same day. They were two different religions celebrating two very different festivals at approximately the same time of year.

What they can’t disprove by lie or slander, they ignore. The world ignores Pentecost and the way God used that Holy Day to give His Holy Spirit to the Apostles. It is hard to find a Pentecost card or gift in any store that is not affiliated with the Christian Church.

Every year the popular media drag up the fiction of pagan origins for Christmas and Easter. The mostly do not cover stories on Pentecost. But I expect that there will be more resurgence of claims that Pentecost was a pagan holiday.

There is another important question raised by these unbelieving authors. Did the Christian Church adopt pagan customs or rituals? The word used to describe the fusion of two different religious practices is syncretism. The Egyptians and the ancient Babylonians adopted each other’s mythologies for political and economical advantage. We have seen the Romans adopt many aspects and false gods of the ancient Greeks. The assumption of the authors I have referred to is that Christianity is a religion evolved out of syncretism of pagan beliefs and practices. They are wrong.

But did the Church adopt pagan customs or rituals? During the mission work of the Church in all ages, Old Testament and New Testament, there have been problems where members would fall away to the culture around them. They would abandon God’s Word and follow after false gods (like King Ahab and the prophets of Baal); follow cultural norms that are contrary to God’s Word (like Lot in the city of Sodom); and even try to bring false gods into the worship of the Church (like the followers of the false god Tammuz in the Temple during Ezekiel’s time). Sometimes they would become inventive and leave God’s Word by making new ways and places of worship that did not adhere to God’s command (like Jeroboam, Saul, Nadab and Abihu).

There were many groups throughout the ages who abandoned God’s Word and followed the teachings of the Gnostics, the Mithraists; some adopted practices like having women serve as priests from pagans; some sought to adopt the new and developing practices and laws of Mishnaic and Talmudic Judaism. Wherever Christianity spread, there you will find Christians who have also departed from God’s Word and adopted customs and rituals contrary to His Word.

But there is another important consideration to make in reading this history. As just one example, when the Church brought missionaries to South America, the local groups often worshiped false gods with particular attributes, one might be the false god of wood working. The local missionary would choose one or more of the saints who had similar attributes, like St. Joseph the Worker, Jesus’ step-father. The missionary would then use the example of this saint who’s attributes they understood, to show them by the saint’s example that the right worship was of the One True God and Savior, Jesus Christ. Thus the example of the saint would be an instructional tool. The similarity of the saint’s life and work to that of their false god would lend to easier instruction by that Saint’s faith and obedience to God’s Word.

This method of instruction also has problems and dangers. No doubt, there would be some who secretly kept the worship of the false god under the guise of the saint, rather than worshiping Christ. But that does not mean that the Christian church in that location was a development from pagan teaching.

Just as with Easter/Passover, the date of Pentecost was set by God through Moses in the Old Testament. The date of Christmas was understood based on these same Old Testament passages.

The question on each of these holidays/Holy Days is how will we as Christians use these days to the honor of God’s name and the advancement of the Gospel. Let us not allow this festival of Pentecost or any other Christian Holy Day fall into disuse or become overwhelmed by the world’s twistings and reinterpretations of these days.