One of the ironic things about the readings for the Day of Pentecost is when the lector–that is, the person reading the lessons–when the lector comes to Acts 2, verse 9, and has to read the following list of persons and places: “Parthians and Medes and Elamites and residents of Mesopotamia, Judea and Cappadocia, Pontus and Asia, Phrygia and Pamphylia, Egypt and the parts of Libya belonging to Cyrene, and visitors from Rome, both Jews and proselytes, Cretans and Arabians.”

Now that is a mouthful! It is like the tower of Babel come to life: “Come, let us go down and there confuse their language, so that they may not understand one another’s speech.” For the lector may not even understand his own speech! All those funny words: “Parthians”; “Mesopotamia”; “Cappadocia”; “Phrygia and Pamphylia”; “Proselytes.” Huh? Instead of speaking in tongues, the lector will be busy untwisting his tongue! And so, “amazed and perplexed,” the person reading the lessons, as well as the people hearing them being read–we all may be saying to ourselves, “What does this mean?”

What does this mean? Why this long laundry list of persons and places? What’s up with all these “Parthians and Medes at Pentecost”? Let’s find out.

Who were all these people? Where did they come from? What were they all doing in Jerusalem? And why on Pentecost? These are good questions to start with. Who were all these people? They were Jews, as our text says: “Now there were dwelling in Jerusalem Jews, devout men from every nation under heaven.” Most all of them were Jews by birth, but mixed in the crowd were also some Gentiles–that is, non-Jews–who had converted to the Jewish religion. Thus the mention of “both Jews and proselytes”–“proselytes” were Gentiles who had become Jews. But all in all, this whole crowd was made up of people who were devoted to the Jewish religion.

And that explains why, even though they came “from every nation under heaven”–this is why they all were in Jerusalem on this particular day. They were in Jerusalem, on the day of Pentecost, precisely because they were devout Jews. Devout Jews would make the trip to Jerusalem and go to the temple, on the appointed days they were supposed to be there. And there were three major festivals in the Hebrew calendar which called for the people of Israel to be there at the temple. These were the so-called “pilgrimage” festivals: the Feast of Passover–“Pesach,” in the Hebrew language–which occurred in the early spring; the Feast of Weeks, “Shavuoth,” which occurred fifty days later, in the later spring, and so it was also called “Pentecost,” which means “fifty”; and then, the third major pilgrimage festival, the Feast of Booths, or Tabernacles, “Sukkoth,” which occurred in the fall. For these three festivals, all Jews were supposed to make the pilgrimage to Jerusalem and go to the temple.

Now making the pilgrimage to Jerusalem was a significant undertaking even back when all the Jews lived in the land of Israel itself. But when the Jews became scattered, away from Israel, living in far distant lands, the trip to Jerusalem became even more of a big deal. But still, they came. And so here they were, thousands of them, making the trek, “devout men from every nation under heaven.”

But how had the Jews become so scattered in the first place? Why were they not all still living in the land the Lord had given them? The fact that the Jewish people had become so scattered–this is referred to as the Jewish Dispersion, the “Diaspora.” Centuries earlier, in 722 B.C., the northern kingdom of Israel had fallen to the Assyrians, and the Assyrians then dispersed those northern tribes, kicking them out of the land. And so off they went in every direction, settling in distant lands, far and wide.

Then after the fall of the north, about a century later, around 600 B.C. the Babylonian king, Nebuchadnezzar, started deporting the people of Judah, the southern kingdom, and taking them off to Babylon, far to the east, in Mesopotamia. This was the “Babylonian Captivity.” And even though the Persian king Cyrus issued an edict in 538 B.C., allowing the Judahites to return to Jerusalem, many Jewish families by that time had settled down in Mesopotamia and made new homes there, and they never came back.

So between the Assyrian deportation and the Babylonia captivity, that accounts for the massive Jewish Dispersion that existed at the time of the New Testament. The Jewish people were scattered all over the Near East and the Mediterranean world, living in many nations for centuries now, and thus speaking the native languages of their respective countries. But these Jews would still come back to Jerusalem and go to the temple for the annual pilgrimage festivals of Passover, Pentecost, and Booths.

So that is the background for why you have all these people from all these lands being present in Jerusalem on the day of Pentecost. But really, more than that, this was all part of God’s plan. God had arranged it for all these people to be there that day. They were all there, in Jerusalem, in and around the temple area. And then when God caused there to be a loud sound, “a sound like a mighty rushing wind,” that caught their attention, and they all went over to the place where the sound was coming from. God wanted them to be there and to hear what else they now would hear.

What did they hear? First, they heard the company of the believers “speaking in other tongues as the Spirit gave them utterance.” These “other tongues” were the languages spoken in those other parts of the world that the Jewish pilgrims came from. These were not languages that the believers knew by learning them in a class. No, this was a miraculous manifestation of the Spirit, specifically given by God for this occasion. It was a message, a signal, that the church now was going to bring the good news of the mighty works of God–that the gospel now was to go out to “every nation under heaven.” Not just to Jewish pilgrims coming to Jerusalem, but more than that, the gospel of Christ would now go out, starting from Jerusalem, to every nation, to both Jews and Gentiles, to be preached in every language spoken in the world. Now it was starting, here in Jerusalem, here on Pentecost Day. Remember how Jesus had told his disciples, before he ascended, “that repentance and forgiveness of sins should be proclaimed in his name to all nations, beginning from Jerusalem.” Well, this is that beginning, Pentecost is. This is the moment, right here.

And so that is what the apostle Peter begins to do. That’s what the people hear next. Peter proclaims repentance and forgiveness of sins in Jesus’ name, in the sermon that follows here in Acts 2. We get the first part of his message today. We’ll get the rest of it next week. But the purpose of it all is this: “And it shall come to pass that everyone who calls upon the name of the Lord shall be saved.”

And that includes you! You and I need to be saved. We need to be saved from our sins, and the judgment that our sin brings down upon us. That sin began in the garden, when our first parents decided they wanted to be their own god. And so they gave in to temptation and disobeyed what God had told them. And the judgment came: They were driven out of the garden and cut off from the tree of life. “Dust you are, and to dust you shall return.” This same sinful tendency that we all share, to be our own god, we see later at the tower of Babel: Men thought they could reach to the heavens and make a name for themselves, apart from God. But God comes down and sees their puny efforts and confuses their language and scatters them to the wind.

Every time we try to be our own god we end up failing, miserably. You and I do this, though, don’t we? We don’t listen to what God has said. We think we’ll just do what we want, independent of God’s word. That’s always a wrong move. And the judgment is always the same: Death. Confusion. Discord. This is why you and I need saving. We can’t do it ourselves. I’ve already shown I make a lousy god–that’s how I got in the fix I’m in. So now, how am I going to rescue myself? I can’t. God must do it for me. 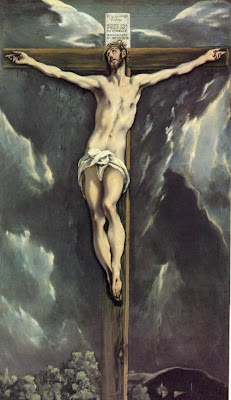 And that is exactly what he has done. To this ball of confusion, God has sent a Savior. Jesus Christ is his name. He, the Son of God come in the flesh–he has done the saving job for us. Peter will go on to tell us next week in greater detail just how this has happened, but I can’t help but tell you some of that right now. Christ, the Son of God, came down from heaven and did what the Father gave him to do, which is to win our salvation. He kept God’s commandments perfectly, in our place. And even though he was sinless, Jesus took the judgment for our sins–again, in our place. He died on the cross, for us, to gain our forgiveness. The cross of Christ is our tower that does reach to the heavens. He lifts us up and takes us there. Christ our Savior rose from the dead and ascended into heaven, and in his name, through faith in him, we will join him there.

This is the good news; this is the gospel that all men everywhere need to hear. And so this is what Pentecost is all about: the beginning of that worldwide outreach. Not only do Parthians and Medes get the good news, so do we. “Parthians and Medes and Elamites and residents of Mesopotamia, Judea and Cappadocia, Pontus and Asia, Phrygia and Pamphylia, Egypt and the parts of Libya belonging to Cyrene, and visitors from Rome, both Jews and proselytes, Cretans and Arabians”–they all heard the mighty works of God being told in their own tongues. But so do these folks today: Lutherans and Swedes and Germans and residents of Potosi, Missouri, Washington County and St. Francois County, and the parts of the Lead Belt belonging to Bonne Terre, and visitors from St. Louis, both family and friends, locals and retirees–we hear the gospel of Christ being proclaimed in our own language, too.

The first Pentecost was the beginning. Pentecost 2013 is the continuation, for now the gospel is being proclaimed to all who dwell on earth, to every nation and tribe and language and people. For Christ Jesus is the Lamb of God who takes away the sin of the world, the Lamb who was slain, and by his blood he has redeemed people for God from every tribe and language and people and nation.

From Libya to the Lead Belt, from Mesopotamia to Potosi and Bonne Terre: “And it shall come to pass that everyone who calls upon the name of the Lord shall be saved.”