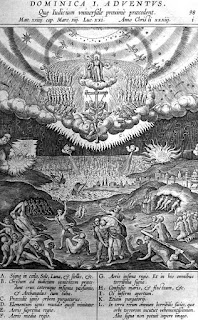 5 “And there will be signs in the sun, in the moon, and in the stars; and on the earth distress of nations, with perplexity, the sea and the waves roaring; 26 men’s hearts failing them from fear and the expectation of those things which are coming on the earth, for the powers of the heavens will be shaken. 27 Then they will see the Son of Man coming in a cloud with power and great glory. 28 Now when these things begin to happen, look up and lift up your heads, because your redemption draws near.”

29 Then He spoke to them a parable: “Look at the fig tree, and all the trees. 30 When they are already budding, you see and know for yourselves that summer is now near. 31 So you also, when you see these things happening, know that the kingdom of God is near. 32 Assuredly, I say to you, this generation will by no means pass away till all things take place. 33 Heaven and earth will pass away, but My words will by no means pass away.

34 “But take heed to yourselves, lest your hearts be weighed down with carousing, drunkenness, and cares of this life, and that Day come on you unexpectedly. 35 For it will come as a snare on all those who dwell on the face of the whole earth. 36 Watch therefore, and pray always that you may be counted worthy to escape all these things that will come to pass, and to stand before the Son of Man.”

Christ does not preach this sermon to the ungodly or non-christians, but only to his disciples and Christians; and he divides it into two parts. The first part is prophecy. (Vs. 25-33.) The other part is an exhortation. (Vs. 34-36.)

The way of the Lord. This manner our Lord God has always observed from the beginning of the world, that when he intended to do some new thing, he caused certain special great signs to precede. As for example, when he meant to punish Egypt and lead his people out of it. And these signs also shall not be an indication which promises temporal peace, rest and joy to the church of God on earth and in this life, but they show that in this evil world, she shall have very great and heavy tribulations, and anxiety, and shall be persecuted, not only by the world without bodily protection and help, but shall also be most oppressed by the general calamities, which God has permitted to come upon the world (since she also still has sins) and yet under these calamities God will nevertheless wonderfully sustain her, until the day, when the Son of man shall come and make an end to all evil among his elect. This is the sum and substance of this sermon of the Lord in reference to the signs, and it is especially to be noted, that we need not anxiously trouble ourselves, as to how or when, and how soon or how long before the last day such signs shall appear. Christ indicates that ever and anon such terrible signs shall appear, which will indicate and bring about such horrible calamities: but at the last times they shall be especially strong and frequent.

Signs in the sun, moon and stars. As to the signs, Christ says first, that terrible signs shall appear in the sun, moon, and in the whole heavens, which (as I think) refers not to one particular time, but he speaks in general of all times, which shall at various times occur, ever and anon, before the end comes.

The signs in the sun and moon. This means that they shall lose their light ‘for one or two days, (Matt. 24:29) yet without intermission of day and night, (Gen. 8:22) as is the case in eclipses of the sun and moon.

The stars shall fall from heaven. This sign can be daily seen.

By the powers of heaven which shall be shaken, may be understood, according to the Scriptures, two kinds of power; namely, the powerful heavens, (Genesis 1:8) and especially their hosts. (Psalm 33:6; Genesis 2:1) But what the shaking of the heavenly powers is I do not yet know, unless they should be the special grouping of the planets. The courses of the heavens are so directed from eternity, that they shall give signs before the coming of this day. But such and other signs in the heavens, either natural or unnatural, may appear even now, ordered by God, that they shall signify something to the world. Thus also suddenly, especially when the end draws nigh, many extraordinary, new and unusual phenomena may occur, such as strange rainbows, shooting stars, blood-red suns, etc.

The sea and the waves roaring. This is done by the winds. Now you must not think here, that all the waters, rivers, lakes and seas are roaring and windy at once.

The fearful apprehension. Now when many people see this distress and terrible state of the world (devastation of kingdoms and countries, ruin of almost every virtue, honesty and discipline) and think what must follow, they will not be able to endure it all, and therefore die prematurely from fear and anxiety. But not all the people will be so alarmed; because very few will regard such signs as signs of the last day, for the last day shall come unexpectedly. (See verses 34, 35; Chap. 17:24; 1 Thess. 5:2-3, etc.) Therefore the great, rude mass will not fall into this distress and anxiety, but a few, and usually the most tender souls and good, truehearted people, who would otherwise intentionally do no harm to any one, who live honestly, but have something secret pressing upon them, as for example, unchastity, which gnaws them day and night.

But let plagues and terrors come, they cannot hurt them. In like manner, the men whose “hearts fail them for fear,” will not be the profligate, great multitude, who despise the divine signs, and ascribe them to nature; but the best and noblest people, who take the matter to heart and reflect on it. Just as it is with a man who is about to die; he must begin to complain and to lie down with a fever; so also, when the world is coming to an end, it must also knack and crack.

But that all this shall conduce to the comfort of those Christians, who believe such signs and coming of the Lord Christ to judgment, and wait for it, is further declared by Christ in verse 28. Sadness bows down the head; joy lifts up the head.

Your redemption draweth nigh. What else does this mean, than that you, who are under the power of the devil (who aims all his arrows at you and turns all his power and malice against you) and are opposed and oppressed by the world, and living in all danger and distress, out of which you cannot nor can any one else extricate you, shall be released by your Lord Christ from heaven, and enabled to become a Lord over the devil, the world and death, so that all must lie at your feet! If then we would heartily wish to be released from sin, death and hell, we must earnestly desire and love the appearing of the Lord. 2 Tim. 4:8; Titus 2:13: Luke 12:36.

The fig tree and all the trees. Our God has written the last day not only into the books, but also into the trees, in order that as often as we see the trees bud in the Spring, we shall continually think of this parable, and on the day of the Lord.

This is certainly a strong explanation, that when I see the sun and moon darkened, the waters and the sea roaring, I should say, God be praised for this; the summer is coming; see the leaves and blossoms coming forth! But, because we shall become new men, it is his will that we shall have other and new thoughts, understanding and sense and regard nothing according to reason, as the world looks upon it, but as it is in his eyes, and we shall govern ourselves according to the future invisible new state, for which we hope. For this miserable life here on earth is like the abominable, unfruitful winter. Heaven, earth, sun, stars, air and all creatures are weary of the world’s malice which they must see and endure, and regret that they are so shamefully abused, and would like to become “new heavens and new earth, wherein dwelleth righteous ness.” 2 Peter. 3:13; Isaiah 55:17.

The kingdom of God, is nothing else, than our salvation. For we ourselves are the kingdom of heaven. (Luke 17:21) Therefore it draweth nigh when we shall become entirely redeemed from sin and from evil.

Shall not pass away, etc. Why does the Lord make his words so firm, and fortify them so strongly with parables, oaths and signs? This is done because all the world shall become so secure, and with open eyes despise the signs, insomuch that no word of God has been so much despised as these shall be, in which he announces the day.

This generation. That is, the Jews who crucified Christ must remain as a sign in evidence of the truth, and though many of them should be converted, yet the generation and the race must remain. The Jews will not all become Christians.

Take heed, lest your hearts be over charged. If they should overcharge only the hands, there might be no danger; but that they overcharge the heart, that is bad and is forbidden; that is, when they put all their trust in riches and honor. There is a common German proverb: “The longer the worse, the older the stingier.” [Je laenger, je aerger; je aelter, je kaerger.] The old people heap up money, and dare not touch it, though they know not whether they shall survive to day, and still less tomorrow. Thus, says Christ, it will also be when the world has grown old; it will continue to rake and scrape.

Also, Pray, that ye may escape all temptation and distress, as it is finely comprised in the last two petitions of the Lord’s Prayer. But here we must also know this, that we cannot call upon God or pray right, when we are not willing to abstain from known sin, and reform our lives. Therefore sincere penitence belongs to right prayer.

That ye may be accounted worthy to escape all these things. This comforting thought is worthy of note, that God will mitigate the common sufferings and sorrows, which otherwise come upon the human race, also in this life, and will even remove them from those who turn to God, and in their conversion call upon him in faith, and that the church may not go to ruin in such misery, and that the pious may not sink into despondency, but be lifted up by the consolation of divine help. Habbakuk 3:2.