The basic claim is that Christ is a fake: an unoriginal copy-cat of some other supposedly more ancient pagan god or gods.

These claims are bunk. Both historians and Biblical theologians have been very thorough in debunking these claims since their earliest times. 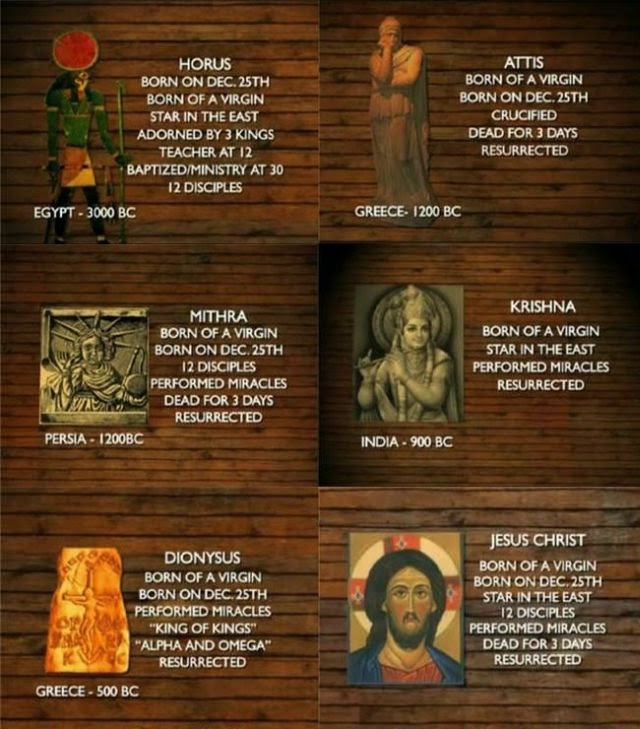 Most people who share this kind of post do not have the intellectual integrity to bother checking up on these claims. And having a reputation as an Atheist thinker doesn’t seem to keep even famous “thinkers” from falling for this fictional bunk.

But the fact is that this falsehood is widely and popularly promoted by people who claim to be objective. Yet they couldn’t be bothered to actually do the research.

A short list of recent so-called documentaries that have promoted this falsehood:

[These are all 2005 and after, list is from Christ Myth Theory.]

But Hitchens, Dawkins, Maher, Atwill, Dan Brown and others are merely repeating the creative fiction of anti-Christian zealots from the 18th century and after. Back then it was hard for people to check up on the scholarship of a published work. Some of these original thinkers were:

There are many other contributers to this stream of creative fiction. It is apparent by looking at their life and work that they had all their own vested interests in discrediting Christianity. The Wikipedia article on Christ Myth Theory is actually very helpful at gaining source information. It does contain some chronological inaccuracies about the movement. But a bit of careful reading can clear up the matter of who invented which idea when.

For many who pass this falsehood on there is an excellent and short video by Pr. Hans Fiene’s video commentary from Lutheran Satire titled “Horus Ruins Christmas” may be enough to help. The video is focused on the Horus variant, but includes Mithra and others.

But there is a lot more background to this series of attacks against Christ, Christianity, and Christian Worship.

The following is a list of supposed originals that they claim formed the basis for Jesus. The list is mainly from James Holding’s very helpful website. Documentation for sources and rebuttals can be found at that website.

James Holding also published a book dealing specifically with this attack against Christianity.

Finding research online to debunk these claims is not actually a difficult thing to do.

One Example: Jesus is Mithra

The following link is an example of a page promoting this falsehood. The article is by a person named Kevin Williams.

Jesus as the Reincarnation of Mithra.

What we should note is how academic or scholarly it pretends to be. Consider just for example this point in William’s post:

7. Reverend Charles Biggs stated: “The disciples of Mithra formed an organized church, with a developed hierarchy. They possessed the ideas of Mediation, Atonement, and a Savior, who is human and yet divine, and not only the idea, but a doctrine of the future life. They had a Eucharist, and a Baptism, and other curious analogies might be pointed out between their system and the church of Christ (The Christian Platonists, p. 240).

What the text actually says in context is the following:

Yes, simply looking up the references used as evidence in support for their arguments usually undercuts what they claim. In this case, Kevin Williams’s proof is actually a statement of an idea that the original work is arguing against.

There are two websites I’d suggest for rebuttals specific to the Mithra claim. But take these with a grain of salt. Tekton, for instance, doesn’t accurately deal with the Dec. 25th date in two ways.

First, the establishing of this date for the celebration of Christ’s birth is very early in the Church [by the end of the 2nd century].

Second, there is no birth date for Mithra given in the ancient sources. The association of Dec. 25 with Mithra was a conjecture by a scholar named Cumont.

The study of Mithraism is itself very useful. And, in fact, you can in less than a day learn all there is to know about the actual textual evidence left to us about this religion. The iconography and art would take a bit longer, but those are left to wide and wild interpretations.

A valuable website with all you would ever need to know about what is really known about Mithraism has been put together by Roger Pearse.