Maybe you remember a bumper sticker that was popular a few years back, which read: “In case of Rapture, this car will be unmanned.” What that bumper sticker meant is the idea that when Jesus comes again, all the Christians alive on earth at that time will be “beamed up” suddenly, leaving the rest of the people on earth behind. That’s why the cars and airplanes and so forth will be vacated when the Christians vanish. This is the so-called “Rapture theory,” and it has been the basis of a veritable industry of popular books and movies and TV programs and radio shows. I’m sure you’ve all heard of the best-selling “Left Behind” series of books and a couple of “Left Behind” movies, one of which came out just recently. All of these books and movies and so on have at their core this idea of the Rapture as the moment when all the Christians will be taken up and disappear, and everybody else, all the unbelievers, will be left behind and not know what just happened.

So that’s the Rapture theory, and it’s usually associated with several other things taking place, which we will get into. And the thing is, there is a Bible verse that does talk about the Rapture. In fact, it’s in one of our readings for today, the Epistle from 1 Thessalonians 4. However–and it’s a big “however”–what the Rapture crowd thinks is going to happen and what the Bible actually teaches, those are two very different things. And so today I want to help you to see the difference, so that a) you will not be misled by what people talk about as the Rapture, and b) you will be encouraged and strengthened in hope by what the Scripture actually does teach. And so our theme this morning: “The True Rapture.”

The Bible verse that mentions a rapture is indeed in our Epistle today, 1 Thessalonians 4, reading as follows: “For the Lord himself will descend from heaven with a cry of command, with the voice of an archangel, and with the sound of the trumpet of God. And the dead in Christ will rise first. Then we who are alive, who are left, will be caught up together with them in the clouds to meet the Lord in the air. . . .”

Now did you hear the word “rapture” in there? No, you say? Well, actually you did. Just not in English. It’s this little phrase, “caught up.” It does say that we will be “caught up” to meet the Lord in the air. And the word “rapture” is simply the Latin-based word for “caught up.” In other words, we Christians will be “raptured,” “caught up,” to meet Jesus in the air when he comes again. This is true. But it’s what the Rapture teachers tack onto that, and how they misunderstand it–that’s where they go wrong.

The Rapture theory as it is popularly thought of today was basically invented, in its modern form, by a guy named John Nelson Darby back in the 1830s. Then later, in the early 1900s, it was popularized through a study Bible called the Scofield Reference Bible. Later on then, it appeared in books like “The Late, Great Planet Earth,” by Hal Lindsey in the 1970s, and the “Left Behind” series, by Tim LaHaye in the 1990s.

The Rapture, as popularly conceived, is usually presented as a “Pre-Tribulation Rapture” in a system known as “Dispensational Millennialism.” Wow, that’s a mouthful! But the theory goes something like this: Jesus is coming again, and when he comes–which we can kinda figure out by reading the headlines and matching them up with some mysterious prophecies in Ezekiel and Daniel and Revelation–when Jesus comes again, all the Christians will suddenly be raptured up and out of their daily life. Thus the empty cars and airline seats. All the people left behind, the unbelievers, will not know what happened to the people sitting next to them a moment ago who have now disappeared. Then will follow a seven-year great tribulation, when all sorts of bad things happen and the Antichrist appears on earth. We Christians will miss all that bad stuff, because we will have already been raptured, you see.

Then at some point in the chronology–it varies according to which version you hear–there will be a mass conversion of all the Jews. The temple will be rebuilt in Jerusalem. The political nation of Israel figures very important in this scheme, you will note. And then after the seven-year tribulation, Jesus himself will come back, for what is now his third coming, I suppose, and he will take up his throne in Jerusalem and rule there for a literal 1,000-year reign. After that, I guess we head into eternity. I’m not sure if there’s a fourth Second Coming.

Well, that’s the Pre-Tribulation Rapture in broad strokes, and the creativity of the writers and speakers to fill in the details is what sells the books and movies and TV shows and radio programs. But I want to tell you today that this Rapture is not the biblical Rapture. Do not be misled. This false Rapture will lead you away from the true hope that you have in Christ. So let’s now get into the true Rapture that the Bible presents.

Paul talks about it here in 1 Thessalonians. Here’s the set-up. The Christians there in Thessalonica have heard that Jesus is coming again. And this is true. Jesus will come again, as the New Testament teaches very clearly, and as we have it in all of our creeds: “From thence he will come to judge the living and the dead.” “And he will come again with glory to judge the living and the dead.” No problem so far. So the Thessalonians know and have been taught that Jesus will come again and that they should be ready for his return, because it could come at any time.

But now the years have started to pass, and Jesus has not yet come back. And during this time, what seems like a delay, some of the Christians there in Thessalonica have died. So some of the Thessalonians are starting to wonder what will happen to their dear departed loved ones who have died before Jesus comes back. Will they be left out of all the good things that will happen at Christ’s return? And Paul here is writing to them pastorally to let them know that, no, those Christians who have already died will not be left out on the day when Christ returns. They will indeed be included in the resurrection of the dead and the life everlasting.

And so this is what Paul writes: “We do not want you to be uninformed, brothers, about those who are asleep, that you may not grieve as others do who have no hope. For since we believe that Jesus died and rose again, even so, through Jesus, God will bring with him those who have fallen asleep.” When Paul here uses the phrase, “those who have fallen asleep,” he’s talking about Christians who have died. And he doesn’t want the Christians who are living to grieve as though those dead Christians are going to miss out. No, we have a hope, a sure hope, to hold onto. Just as Jesus died and rose again, so will all those who have trusted in him for their salvation. The dead in Christ will rise.

Paul continues: “For this we declare to you by a word from the Lord, that we who are alive, who are left until the coming of the Lord, will not precede those who have fallen asleep. For the Lord himself will descend from heaven with a cry of command, with the voice of an archangel, and with the sound of the trumpet of God. And the dead in Christ will rise first. Then we who are alive, who are left, will be caught up together with them in the clouds to meet the Lord in the air, and so we will always be with the Lord.”

You see, this is talking about the Second Coming of Christ at the Last Day. And there will not be a “Third Coming” or a “Fourth Coming” at some “Laster Day” or “Lastest Day.” No, all that stuff about a literal seven-year great tribulation after the Rapture, followed by a literal thousand-year reign of Christ in the city of Jerusalem in Israel–all that stuff is a misreading and a piling together of little snippets of verses, pulled out of context and misapplied. The truth is, there will be one Second Coming, on one Last Day–Judgment Day, the day when Christ returns for good. That’s what we’re looking forward to. 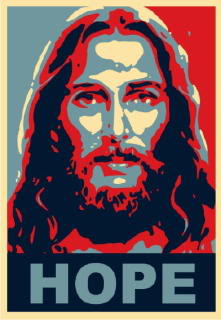 And with good reason! This is the biblical hope! This is what we Christians long for, with eager anticipation: the day of Christ’s return. This will be the return of our Savior. The good news is, our Judge is also our Savior: our Lord Jesus Christ, the Son of God, who, at his first coming, came as our brother, to fulfill the law for us and to bear our sins on the cross. This is the basis for the hope we have: the forgiveness and the righteousness and the redemption won for us by Christ. Jesus took the weight of our sins–your sins and mine, all of them–and he shed his holy blood for us, the once-and-for-all sacrifice that cleanses us and makes us righteous before God, justified to stand before his throne on the Day of Judgment. Then Jesus rose from the dead, showing forth the victory he has won over the grave and the devil and death itself. Some weeks later, Jesus ascended into heaven, with the promise that he will come again, in glory. And when he does, he will raise from the dead all those who have died with their faith in him. And we who may still be alive and walking around when he comes again–for he could come any day now, next week, or next year, or a hundred years from now, no man knows the day nor hour–we all will be caught up together in the true Rapture, a joyous rapture, to meet our Savior and be with him forever.

Do you see how this is such great good news? No need to make up any concocted stuff to add on. What the Bible teaches simply and plainly is true and more than good enough! Jesus is coming again! Lift up your heads, for your redemption draweth nigh! Be watchful and wakeful and be ready! You have a sure hope. Your loved ones who have died–there is hope for them too. Jesus is coming again! Our bodies will be raised from the dead, and we will be transformed. You will still be you, except your bum knees will no longer be bum. Your bad eyes will see clearly. No more disease. No more sorrows. No more sin. A restored creation. Paradise regained, and then some. God will wipe away every tear from your eyes. A joyous reunion, with all the saints. Everlasting fellowship. We will see the Lord, our Lord Jesus Christ, and delight in his presence forever. Friends, this indeed will be true rapture!

“And so we will always be with the Lord.” No wonder Paul says: “Therefore encourage one another with these words.”