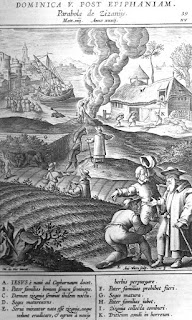 Another parable He put forth to them, saying: “The kingdom of heaven is like a man who sowed good seed in his field; 25 but while men slept, his enemy came and sowed tares among the wheat and went his way. 26 But when the grain had sprouted and produced a crop, then the tares also appeared. 27 So the servants of the owner came and said to him, ‘Sir, did you not sow good seed in your field? How then does it have tares?’ 28 He said to them, ‘An enemy has done this.’ The servants said to him, ‘Do you want us then to go and gather them up?’ 29 But he said, ‘No, lest while you gather up the tares you also uproot the wheat with them. 30 Let both grow together until the harvest, and at the time of harvest I will say to the reapers, “First gather together the tares and bind them in bundles to burn them, but gather the wheat into my barn.”’”

Paul also complains, (Romans 16:18) that the hearts of the simple are deceived, and it grieves him that the Galatians, who ran well for a time, did not obey the truth (Galatians 5:7) For the heretics capture not Epicurean worldlings, not the thorns, not the avaricious, but the most select people, and those who have the best conscience, who seek the truth with all earnestness; this is certainly very painful. Therefore he lays this parable before the pious for their consolation in order that they may not fear that all hope for the faith and the church is lost, but that they may think it must be so, because it had been foretold.

They must be men of spiritual discernment, who can detect those tares; for the parable speaks of those who, professing the Christian doctrine and faith, live unchristian lives, glistening finely whilst they are pernicious. At the same time this parable gives us to understand, that the free will is nothing, because the good seed is sown only by Christ, and the devil can sow only bad seed, as we see also that the ground of itself bears nothing but tares.

25 But while men slept, his enemy came and sowed tares among the wheat, and went his way.

While men slept. The sleep occurs, when people feel secure; or also, when Christians indeed preach diligently and are least apprehensive. While they sleep, as it were, and fear nothing of the kind, suddenly false prophets arise. Hereby he shows that it is impossible to prevent heresies. Therefore no Christian or preacher should indulge the hope that all the people in his church are pure.

Both are sown on one field. The devil also would like to sit in heaven, and does not like waste and barren places.

Went his way. Herewith the Lord shows how the devil adorns and disguises himself, in order that he may not be regarded as a devil. Wherever he introduces false doctrines into Christendom, they advance finely; it appears as though they proclaimed the name of God, his word and work.

26 But when the blade was sprung up, and brought forth fruit, then appeared the tares also.

When the blade was sprung up. As long as the heretics remain concealed, under the pretence that they agree with us, they are unspeakably lowly; but when they begin to teach and to do the contrary, then the spirit of truth recognizes them at once. Then they also separate themselves from us and form sects. For, when the wheat grows up, then we see the tares. That is, when we teach the word of God and faith, so that fruit is brought forth, then they set themselves in opposition and wish to hold possession of the field.

27 So the servants of the householder came and said unto him, Sir, didst not thou sow good seed in thy field? from whence then hath it tares?

Whence hath it tares? This surprises the servants, the preachers, but they do not yet venture to judge, would put the best construction on it, because those profess the Christian name. They speak thus, be cause they wish that all were like-minded everywhere.

28 He said unto them, An enemy hath done this. The servants said unto him, Wilt thou then that we go and gather them up?

An enemy hath done this. This reason he assigns to warn us against the unpleasantness of giving offense to the whole world, who would say, Nothing good comes from the preaching of the gospel. But Christ declares here, that this is not the fault of the doctrine which is pure and salutary; neither is it the fault of the preachers, who use all diligence, that the people may become pious; but that it is the fault of the enemy, the devil. The proverb remains true, that where God establishes a fine, pure church, the devil soon builds a chapel along side of it. Therefore we should be undaunted, and not for sake our office, when we see the tares; but the more earnestly continue to exhort the people, that they be not offended thereby.

From the beginning of the church the heretics were of the opinion that the church must be holy and without sin. Even the servants of the master take offense thereat, because they wish to gather out the tares.

29 But he said, Nay; lest while ye gather up the tares, ye root up also the wheat with them. 30 Let both grow together until the harvest: and in the time of harvest I will say to the reapers, Gather ye together first the tares, and bind them in bundles to burn them: but gather the wheat into my barn.

Let both grow together. These words may be understood in two ways. First, because some among them who might yet be converted, would at the same time be condemned and ruined. Secondly, because as the Church can not be without tares, if we would root out the tares, it would be even as if we would root out the Church. For the fanatics, while they claim to be the genuine wheat and a pure church, manifest with their all too great claim to holiness, that they are no church at all.

Until the harvest. That is, you cannot change this; that belongs to me, I will decide this matter on the future judgment day, when I shall deliver you from this endurance and oppression.

Let both. By this word he does not confirm or sanction them (the pope and others) but it is a word by which he would comfort and exhort us to patience. See Matthew 15:14; 8:22.

Grow. He does not say that we should sow or cultivate tares; but he says, the tares are sown by the enemy, while the people slept. From this it does not follow that we should with open eyes permit the tares to be sown, when we could easily prevent it.

The power to discipline or excommunicate the sinner has not been taken from the Church. For the Lord speaks in this passage of such an out-rooting, which is done by the sword. We must deal here with God’s word, for thus it goes in these matters, that he who errs today, may come first tomorrow. If Matthew, whilst he was yet a publican, and Paul, whilst he was in the act of persecuting the Christians, had been killed, then the wheat which grew after they were converted, would also have been rooted out.

Do thou, minister or preacher, faithfully attend to the duties of thine office; suffer not thy pure faith, profession and Christian life to be taken from thee, or be hindered; if there is no other remedy, then openly excommunicate such people, heretics and false Christians, that every one may know them to be dangerous tares and avoid them (Titus 3:10) check and prohibit them, that they do not intrude themselves and presume to preach.

The other question is, Shall the worldly government suppress the heretics by the sword? Answer: This passage requires no more, than that this Lord’s Servants shall not pull out the tares themselves; they shall not use the sword, for God has not given it to them, but he has given it to the worldly government. Where such incendiary teachers (not heretics in general) will not be advised and will not desist from their preaching, the government may rightly interfere.