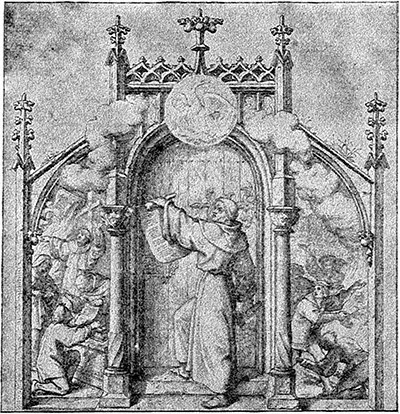 On All Hallows’ Eve 1517 a monk named Martin Luther posted a list of points for discussion and debate at the University of Wittenberg campus church. The campus church is named All Saints’ Church. The regular bulletin board for such announcements was the front church door. All Saints’ Church was the largest repository of relics of the saints outside of Rome. Many of those relics would be put on display on All Saints’ Day. Indulgences would be granted to those who came to the Church to view the relics of the saints on that day.

The location, the date, the practices: all of these helped focus the issue on and ensure a wide audience to the topic of Luther’s posted points.

The topic of the points for discussion: The Saints of the Church, and whether paying for a Papal Indulgence benefits the Saints, whether dead or living.

These points are called the Ninety-Five Theses. You can read them all at this link. As a sample we give points 27-37: 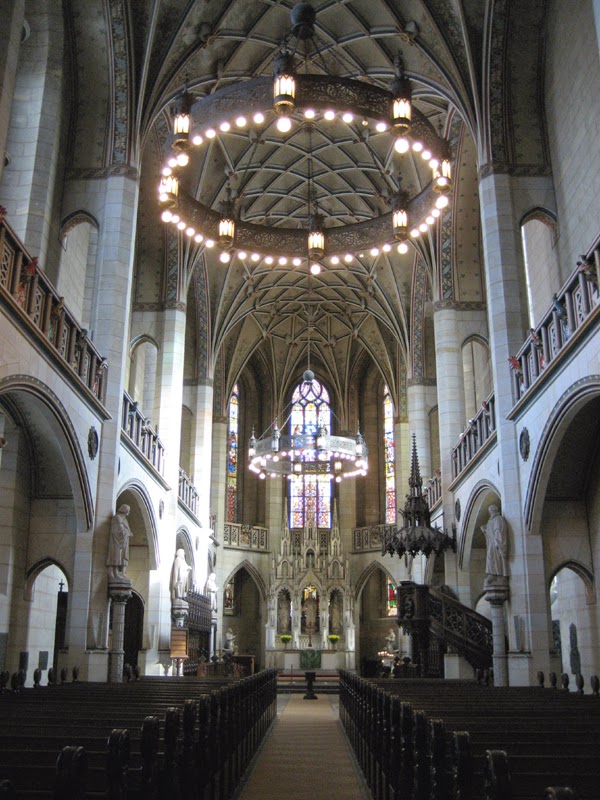 From late antiquity the cult of the saints grew within the ChristianChurch. It was lucrative–kind of like a circus side-show where the prize for the price of admission was not just to see the relic of a saint, but also to get some time out of purgatory or some grace to do good works to keep from going into purgatory.

In short, the Christian Church was a mess: plugged chock full of prayers to dead people that were declared by officials of the Church to be saints; overflowing with relics of dead people which were to be venerated, adored, and even prayed to in some cases; teaming with pilgrimages to these relics, artifacts of a nominally Christian Church that had abandoned God’s grace through faith in Christ and turned to salvation by other means.

The Church had adopted innumerable pagan practices. And no particular festival day showed the fact more clearly than All Saints’ Day. No particular church building could have been a clearer example than All Saints’ Church in Wittenberg, the largest focal point for pilgrimage to venerate the relics of the saints outside of Rome.

So it is instructive to see what was done by Luther and the Lutheran Reformation.

All Saints’ Church was not torn down. Some of its statuary were removed, but not all. Some of its art was changed, not just to get rid of particular saints, but to add some as well. One in particular was buried inside the church with a visible sepulcher and an image of the deceased. 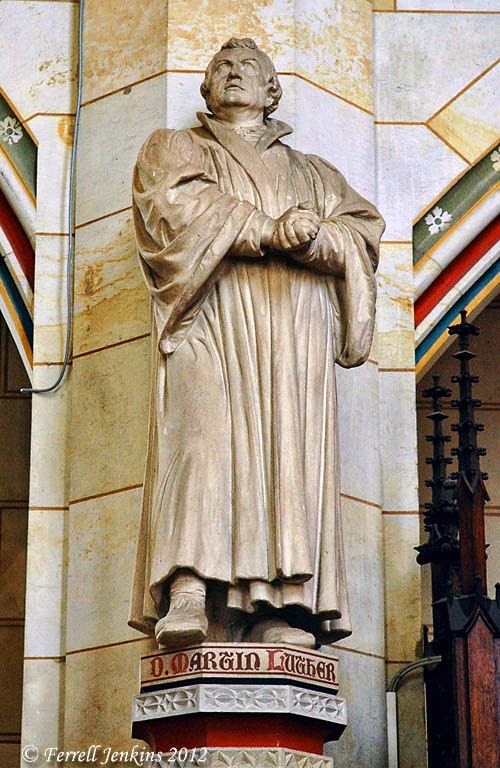 The observation of All Saints’ Day was not prohibited. Rather, it was expanded to include the teaching of God’s Word on what a saint truly is through faith in Christ alone. The abuses imported by the Church for the worship of the saints through the ages were rejected. But the value of remembering them, how God preserved them, and what God worked through them is retained, celebrated, and taught.

The attitude of Luther and the Lutheran Reformers was not to throw away everything that the Roman Church had done. Rather the purpose was to retain as much of the historic Christian practice as could be without violating the central teaching of Scripture: that we are Justified by God by His grace alone through faith alone in Christ alone as taught only in His Scriptures.

We retain All Saints’ Day, All Hallows Eve’, the honoring and remembering of the Saints who have gone before us–who pointed to Christ alone as their and our salvation. We confess in the Augsburg Confession of 1530:

Article XXI: Of the Worship of the Saints.
1] Of the Worship of Saints they teach that the memory of saints may be set before us, that we may follow their faith and good works, according to our calling, as the Emperor may follow the example of David in making war to drive away the Turk from his country. 2] For both are kings. But the Scripture teaches not the invocation of saints or to ask help of saints, since it sets before us the one Christ as the Mediator, Propitiation, High Priest, and Intercessor. 3] He is to be prayed to, and has promised that He will hear our prayer; and this worship He approves above all, to wit, that in all afflictions He be called upon, 1 John 2:1: 4] If any man sin, we have an Advocate with the Father, etc.
5] This is about the Sum of our Doctrine, in which, as can be seen, there is nothing that varies from the Scriptures, or from the Church Catholic, or from the Church of Rome as known from its writers. This being the case, they judge harshly who insist that our teachers be regarded as heretics. 6] There is, however, disagreement on certain abuses, which have crept into the Church without rightful authority. And even in these, if there were some difference, there should be proper lenity on the part of bishops to bear with us by reason of the Confession which we have now reviewed; because even the Canons are not so severe as to demand the same rites everywhere, neither, at any time, have the rites of all churches been the same; 7] although, among us, in large part, the ancient rites are diligently observed. 8] For it is a false and malicious charge that all the ceremonies, all the things instituted of old, are abolished in our churches. 9] But it has been a common complaint that some abuses were connected with the ordinary rites. These, inasmuch as they could not be approved with a good conscience, have been to some extent corrected.

We thank God not by trashing all the heritage of Christian liturgical practice, but by learning it, appreciating the lessons of those who have gone before to shape this practice into a reflection of the bare truth of God’s Word.

The Apology XXI states in part:

4] Our Confession approves honors to the saints. For here a threefold honor is to be approved. The first is thanksgiving. For we ought to give thanks to God because He has shown examples of mercy; because He has shown that He wishes to save men; because He has given teachers or other gifts to the Church. And these gifts, as they are the greatest, should be amplified, and the saints themselves should be praised, who have faithfully used these gifts, just as Christ praises faithful business-men, 5] Matt. 25:21, 23. The second service is the strengthening of our faith; when we see the denial forgiven Peter, we also are encouraged to believe the more that grace 6] truly superabounds over sin, Rom. 5:20. The third honor is the imitation, first, of faith, then of the other virtues, which every one should imitate according to his calling. 7] These true honors the adversaries do not require. They dispute only concerning invocation, which, even though it would have no danger, nevertheless is not necessary.

There are many today who, like the church of late antiquity and the middle-ages are tired of the testimony of the Saints who have gone before us. They also reject historical liturgical practice and with it the historical confession of the faith. All in favor of newness and a self-satisfied feeling of genuineness in their own expression of worship. So they add, they tweak, they abandon not for the sake of clear biblical teaching, but for the sake of the audience. Whatever gets them in the door. Whatever can attract them to keep them coming.

That is, in part, how the cult of the saints started and twisted the observation of All Saints’ Day off its course before the Reformation.

Blessed Halloween to you all.