Associate Editor’s Note:  With this post we want to introduce a series of articles written by Pastor Joseph Abrahamson, a personal friend who grew up not far from me and also then served a parish not far from where I first served.  The series is called “Redeeming Holy Days from Pagan Lies” and will focus on the true history behind some of our holidays (holy days) and how pagans and even some Christians help promote the lies.

Where Did Halloween Start in the Christian Church?

In the first three centuries after Christ’s resurrection, the lives of the martyrs of the Church were commemorated on the day and in the place where they were killed.

There were so many who were killed because of their faith in Christ during those centuries. Throughout the Christian Church different days were set aside not only for each martyr, but a special day for all Saints.

The earliest reference to a day being dedicated to the commemoration of All the Martyrs and All Saints of the Christian Church comes from the 2nd century. The document is titled “The Martyrdom of Polycarp.” Polycarp was a Christian killed because he would not deny Christ. The document says:

Accordingly, we afterwards took up his bones, as being more precious than the most exquisite jewels, and more purified than gold, and deposited them in a fitting place, whither, being gathered together, as opportunity is allowed us, with joy and rejoicing, the Lord shall grant us to celebrate the anniversary of his martyrdom, both in memory of those who have already finished their course, and for the exercising and preparation of those yet to walk in their steps. (Chapter 18) [Emphasis added]

Later, a Christian Bishop named Ephraim the Syrian mentions a common All Saints’ Day in 373. In 397 St. Basil of Caesarea chose a day when the churches of his bishopric would honor the memories of all Saints known, and unknown, alive or in heaven. Later, John Chrysostom mentions a common day of memorial for the Saints in 407 AD.

In the year 609 or 610 Pope Boniface IV established a date for All Saints’ Day on May 13th. And later, in the early 700s AD, Pope Gregory III changed the date to November 1st. Decrees like this took some time to propagate from Rome to the more remote areas where the Church was found. But the change in date had nothing to do with any pagan practices. Pope Gregory IV extended the celebration on this day to the entire Western Church in the early 800s. And again, the change took time as it spread from Rome.

The point is this: a common day for commemorating the Saints has been around throughout the Christian Church from very early times. And the fact that it falls on November 1st today has nothing to do with paganism.

These days we have “Trick or Treat,” costumes sometimes too gruesome to describe: witches, goblins, werewolves, vampires, zombies, Lady Gaga; Jack-O-Lanterns, skeletons, spooky sounds, grave stones, candy and a celebration of gore and all that is un-Holy.

Don’t ever expect truth from Neopagans and Wiccans. They already live in a fantasy world created by their own fakelore.

The claim is that the old folklore demonstrates where we got Halloween. But folklore does not support the Neopagan or the Wiccan claims about Halloween. Instead they depend on fakelore: invented, and fake, pretend folklore, like Pecos Bill and the song “Follow the Drinking Gourd.”

The typical claims in current sources are that Halloween come from “ancient Celtic practices, Catholic and Roman religious rituals and European folk traditions.” With respect to the origins of All Saints’ Day these claim are false. With respect to the modern re-paganizing of Halloween, the Neopagan version of Halloween doesn’t really come from ancient pagan sources. It comes from modern sources that pretend to be old but are not. These modern sources are simply fiction.

Doesn’t Halloween Have Its Origins in Samhain?

Neopagans and Wiccans like to claim that the source of Halloween is the Celtic festival of Samhain (pronounced Sow-in). There are three basic problems with their claim.

So let us look at each of these three claims:

These, then, are the facts.

Samhain comes from the 10th Century A.D. and is a newer invention. All Saints’ day is older than Samhain. All Saints’ Day came from the practice of honoring the Christian Martyrs in Israel, Turkey, and Syria as early as the 2nd Century and later.

All Saints’ Day and therefore Halloween originated outside the Celtic sphere of influence and had nothing to do with what the Neopagan and Wiccan claims are about its origin.

In fact, the newer holiday, called Samhain, was a Lunar holiday. This means that it could be celebrated on any of 30 or so days in Autumn of a given year depending on when the harvest moon was recognized in Ireland. And very, very rarely did this moon happen on October 31st. This simple truth cannot be emphasized enough.

Any book or website or article that claims that the ancient Celts celebrated Samhain on October 31 is perpetrating a lie. Modern Neopagans and Wiccans invented their own calendar through the 1970s and 1980s and they chose Oct. 31 to be the day for Samhain. It was a move on their part to put forward the false claim that Halloween started in paganism.

Why Would the Non-Christians Want to Undermine This Holiday?

All Saints’ Eve (Halloween) and All Saints’ Day have a special place in the commemoration of the Christian Church because of the Reformation. It was on October 31st, Halloween, that Martin Luther posted his 95 Theses on the door of the church at Wittenberg, Germany. It was on that date he chose to challenge the corruption in the official church about the notion that salvation in Christ could be bought with money or works. All Saints are saved by Grace, through Faith, revealed by God’s Word in Christ.

It should not be surprising that Satan and the World have gone to such extremes to defile Halloween with anything that would distract Christians and the unbelievers from Sola Scriptura, Sola Fide, Sola Gratia and Solus Christus ( Scripture Alone, Faith Alone,  Grace Alone, and Christ Alone).

In this world some traditions have become the mainstay of Halloween. Though these traditions are not necessarily a problem by themselves, they have been claimed by the Neopagans and Wiccans as evidence that Christianity is a fraud and newcomer that has replaced the “Older” so-called “Truth”. But they lie.

The Haunted House started in the early 1970s. The first records of Haunted Houses were from Cincinnati, Ohio where the Jaycees (Junior Chambers of Commerce) introduced the first Haunted Houses as a way to keep kids entertained on Halloween.

Jack o’Lanterns are an American invention from the mid 1800s. Ireland and Britain had older traditions of carving vegetables into lanterns. But those traditions are not ancient. Historian David J. Skal writes:

Although every modern chronicle of the holiday[ of Halloween] repeats the claim that vegetable lanterns were a time-honored component of Halloween celebrations in the British Isles, none gives any primary documentation. In fact, none of the major nineteenth-century chronicles of British holidays and folk customs make any mention whatsoever of carved lanterns in connection with Halloween. Neither do any of the standard works of the early twentieth century.
(see this and other helpful references cited at The Scoopie)

It was in 1837 that the term “Jack o’ Lantern” first appeared as a term for a carved vegetable lantern. Previously the term referred to the man or boy a town hired to keep the street lamps lit through the night. The pumpkin was used with the cornucopia as a fruit that was displayed throughout fall harvest time in America as a sign of God’s providential blessing.

Trick or Treating is very popular in America and several other countries. In the Middle Ages (1300s to 1500s or so) there was a practice where children or the poor would go from door to door to beg. In some places these beggars would sing or perform in order to get gifts of money or food from householders. While this happened every day of the year, because these beggars had to eat every day, they were particular active on holidays. Christmas, Easter, Pentecost, and All Saints’ Day were special days when children and adults would go from home to home singing hymns and carols and begging. A good source for what these people would sing is the Oxford Book of Carols.

In Shakespear’s 1593 play The Two Gentlemen of Verona the character Speed accuses his master of “puling [whimpering or whining] like a beggar at Hallowmas.” That’s our All Saints’ Day, November 1st.

So what is older? All Saints’ Day or Trick or Treating?

Halloween, Reformation Day, All Saints’ Day is a very special day of the year for the Christian Church. We commemorate all saints past, present, and future with the confession that we cannot save ourselves with our own works, no price we could ever pay would be good enough. But Christ has paid for the whole world. And all believers in Christ, and these are the Saints, will be raised on the last day to eternal life. Reclaiming Halloween means knowing where it comes from, why the day was established, and the historical significance it holds for the Christian Church. Satan and the world are always willing to undermine and steal anything that is of value to the confession of the truth of Scripture. Let us not fall prey to the lies. 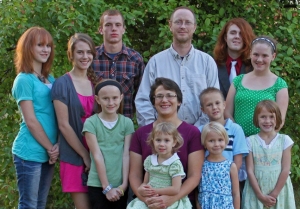 Pastor Joseph Abrahamson serves Clearwater Lutheran Parish: a parish of four Confessional Lutheran congregations in very rural Northwestern, Minnesota. He and his wife, Mary, have 10 children. Pastor Abrahamson is a graduate of Bethany Lutheran Theological Seminary, and of the University of Wisconsin-Madison’s Department of Hebrew and Semitic Studies. He has served on the Faculty/Staff at Bethany Lutheran College teaching Religion, Linguistics, Archaeology, and Self-Defense; and was on Staff at the University of Wisconsin as an Information Processing Consultant (Computer Geek) while doing graduate work in Semitics. Pastor Abrahamson has served Clearwater Lutheran Parish (ELS) for since Dec. 2001.