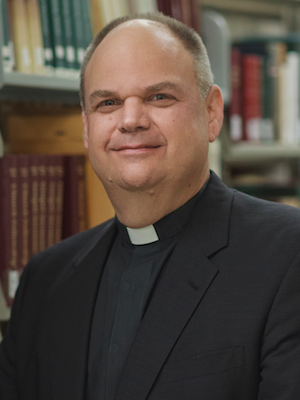 Two years ago this past Friday, our Lord called to himself the soul of Paul McCain.

“Our churches teach that the history of saints may be set before us so that we may follow the example of their faith and good works, according to our calling.” (AC 21, McCain) and “Our Confession approves honoring the saints in three ways. The first is thanksgiving. We should thank God because He has shown examples of mercy, because He wishes to save people, and because He has given teachers and other gifts to the Church… The second service is the strengthening of our faith. When we see Peter’s denial forgiven, we also are encouraged to believe all the more that grace truly superabounds over sin (Romans 5:20). The third honor is the imitation, first of faith, then of the other virtues. Everyone should imitate the saints according to his calling.” (Ap 21, McCain)

We give thanks to God for Paul’s witness, and his example. When Dr. Barry become President of the LCMS, Paul went with him to St Louis as his assistant. I don’t know how much of a political advisor he was. But he was the man behind the “What About…” Pamphlets. After a generation or more of the office of President becoming increasingly political, Dr. Barry turned the office of President toward theology – and Paul was the resident theologian. He showed that we can give answer to difficult questions. We can stand in our congregations and neighborhoods and declare our beliefs without shame. This was a return to faithfulness that had nearly been lost. For two decades faithful saints were put through struggle sessions to apologize for our beliefs, cover them, soft sell them, try and twist them into something the world found acceptable. The Divine Service, Closed Communion, the Order of Creation, Ecumenism: it didn’t matter the topic. We were on the wrong side of history, and so best not to mention those things, or if you did mention them, grovel for forgiveness. Paul shouted faithfulness from the entryway of every congregation in synod: free tracts that confessed theology. Who could have imagined it? I mean that sincerely. At the time, no one even imagined such a thing. It was a simple and small change. But one with profound consequences.

I don’t know about the inner working of the hymnal project, but I know he was in on the discussions at the beginning that set its direction, and he was at the end to print it and guide its introduction. Hundreds helped with the process; it was a group effort. But Paul was part of that group. He guided and printed a hymnal that united the synod in worship unlike any other single resource in living memory. People may quibble about this or that thing in LSB, but the synod is stronger for the hymnal, and Paul is a part of that.

But his single greatest contribution to the church is already listed above as the endnote of the confessions quotes. He was responsible for the McCain edition of the Book of Concord. When I graduated seminary, there was no thought that CPH would produce an edition of the Lutheran Confessions. Who would buy it? Who would read it? It was an academic thing, unrelated to the world around us. Paul knew that the doctrine of the church is our life. If we aren’t living that doctrine, then we may as well pack up and go home. He knew it was important, it was relevant, and it was necessary. He knew something that we still need to learn more and more: People are hungering and thirsting for the solid meat of the Doctrine of God’s Word. Pastors and people are tired of baby mush and want to dig deeply into the divine mysteries and faithfully confess the teachings of our Lord Jesus.

It was a career-gamble. Printing thousands of copies of a work already owned by every pastor –who else was interested? Long delays in congregations while they waited for printed copies were the answer. More than 20,000 were sold.

McCain isn’t used among academics at this point. They prefer Kolb-Wengert for now; McCain doesn’t have scholarly aparati. I expect in the next generation, the tide will turn. Here’s a handy chart for why McCain is important, and why I think it will eventually be predominant:

Paul McCain joined himself to a rare group. It’s an obscure group, to be sure. And to be clear, I don’t think he ever called it “The McCain edition.” But “Readers Edition” sells short what it really is: A faithful translation of the confession to which pastors bind their faith, the life, their ministry, their salvation.

Long after the fights about this or that political issue are forgotten, long after the major players in church office buildings have gone out to pasture, and the buildings have been converted into insurance or dental offices, faithful saints will still reach for Concordia, The Lutheran Confessions, Reader’s Edition, but they will say to themselves, “Let me check McCain, see what he says…”

3 thoughts on “Commemoration of Saint Paul McCain, Theologian and Publisher”