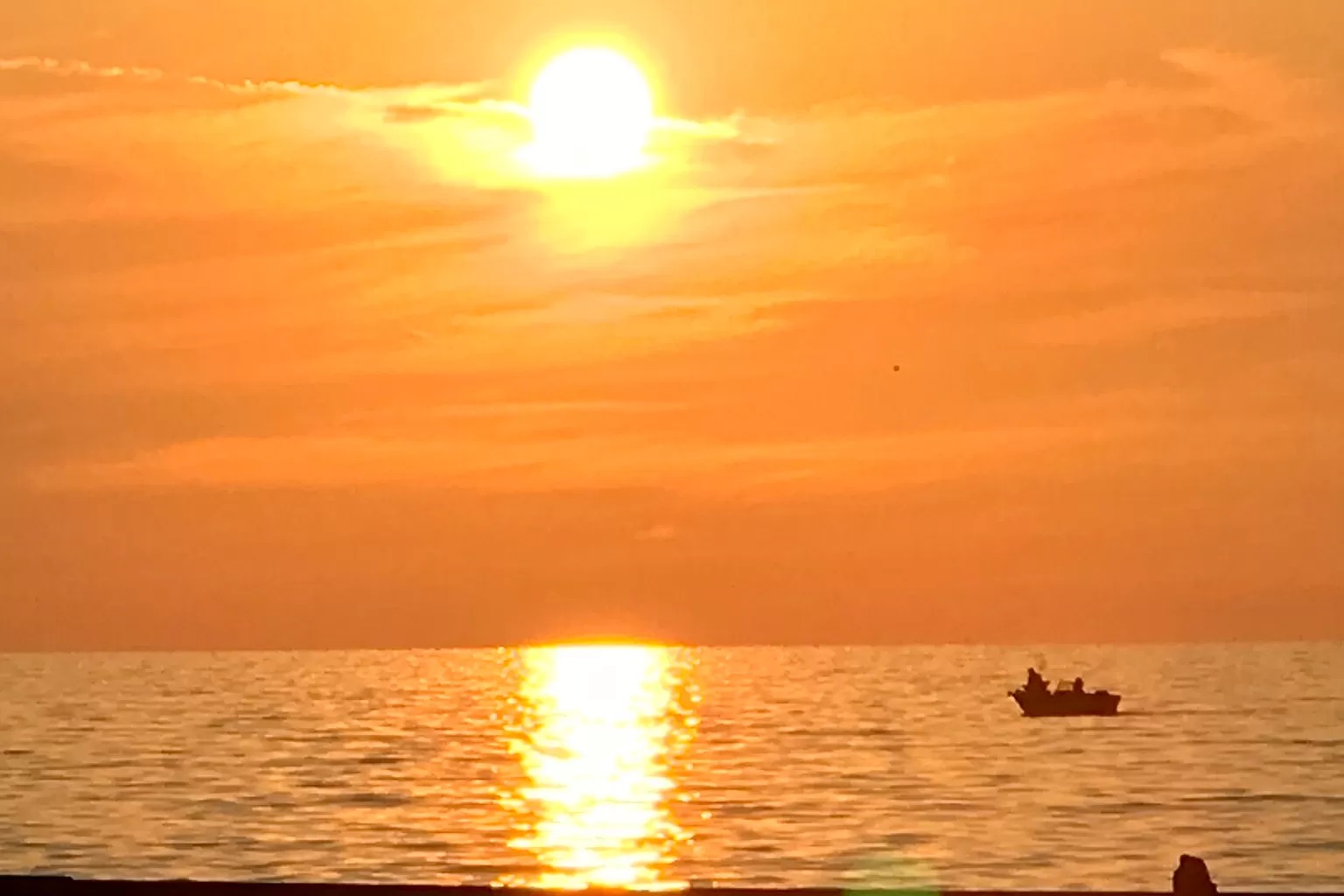 When God made the universe and all things in it, He filled it with light. In Genesis 1, the Lord creates the lights in the expanse of the heavens, and we read, “And God made the two great lights—the greater light to rule the day and the lesser light to rule the night—and the stars.” The sun is the king of the day adorned in the brightest and warmest light. Its luminescence unveils the majesty of God’s creation, which would otherwise be hidden in darkness. There is no light that compares to its rising. Even on the coldest days in the darkening nights of winter, the rising sun brings such great and comforting warmth. Even the rain cannot hide the sun’s beauty as it reveals the marvelous colors of the rainbow when it peeks from the clouds. As spring and summer now gather before us, I think back to when I was a child staring out over the waters of Lake Erie watching the blinding light rise in the east over the horizon. There is joy that comes with the morning when the sun’s beaming rays pierce through the clouds of night and send running the chills of darkness. It’s serene to watch its warmth lap up the dew that has gathered on the grass and flowers as it dries the tears of the earth. I’m almost left without words to describe the essence of joy that comes from first light each morning as the golden sun ascends into the heavens. I’ve stared at the photos of my past beholding a transcendence of peace that was held in time when that shutter closed and preserved the image of the sun’s orange glow, the pink skies, and the purple clouds in the reflection of the water. The Lord paints the sky with the glory of His majesty as He makes the sun to rise each morning over all creation, over the evil and the good.

We speak of what we know; and we describe that which we can see with our eyes. People from all over the world have looked upon the same rising sun for millennia and praised its beauty in song, poem, and narrative, but only the Christians have gathered its splendor and compared it to the greater rising of Christ from the grave. A well-known Danish hymn writer of the 17th Century, Thomas Kingo, expressed the glorious hope in the rising of the Son in the beautiful hymn Like the Golden Sun Ascending. This 10 stanza hymn begins with these words:

Like the golden sun ascending,
Breaking thro’ the gloom of night,
On the earth his glory spending
So that darkness takes to flight,
Thus my Jesus from the grave
And Death’s dismal, dreadful cave
Rose triumphant Easter morning
At the early purple dawning.

He, like us, never saw the resurrection, but from the Scripture he read the account of the women coming at the break of dawn to the tomb. Surely he remembered the words at the beginning of Luke’s Gospel from Zechariah: “because of the tender mercy of our God, whereby the sunrise shall visit us from on high to give light to those who sit in darkness and in the shadow of death, to guide our feet into the way of peace” (Luke 1:78-79). It was with the beautiful inspiration from the Word of God that Kingo poetically crafted a hymn which brings us to picture the glorious hope of the resurrection like the golden sun ascending from the shadows of night. If the rising of the sun over the earth has such power to bring joy and peace as it breaks through the night, how much greater is the golden rising of the Son of God from the grave as He pierces through the darkness of sin and death?

When sin’s dreadful gloom of guilt condemns you, when the devil’s dark visage looms over you, and when the cold nature of death pricks you with its icy fingers, Jesus, the light of hope shines down upon you. He will not cease to shine the light of hope from the heavens. The light of hope for you is this: Jesus died to pay the price of your sin. He bowed his head in guilt and shame so that you could lift your head in glory. He was raised for your justification and your great accuser has been cast down. Jesus has, like the golden sun, ascended and you now have an advocate with the Father. Death, the undertaker, cannot trap you in the shadows nor can he lock you inside the dark tomb. Jesus has promised that you too shall arise from the dead with a warm and glorified body like His. You shall stand at the last to behold the radiance of the Son of God with your own eyes. Remember, when Christ arose from the tomb, He sent running the frightening chills death. So powerful was Christ’s resurrection that “…many bodies of the saints who had fallen asleep were raised, and coming out of the tombs after his resurrection they went into the holy city and appeared to many” (Matthew 27:52b-53). The resurrection is our greater light of hope. Just as the sun dries up the dew of the earth, so also does Christ shine down in the warmest light to dry the tears of mourning when loved ones go with Him to the Father in heaven.

At one time we sat in darkness and the horizon was lost to us, but now, in the radiance of Christ’s glory, we see by faith a marvel beyond all telling. The resurrection of Christ paints the skies of eternal life with splendid colors. Surely, there are a great many things that make us sorrowful, but what can ever displace from our hearts the warming message of the Easter Resurrection? What can cause us to doubt our eternal rising? When you go to sleep at night, you do not question whether or not the sun will rise in the morning. Even if you cannot see it behind the stormy clouds, you know that it is there without a doubt. You know that nothing can stop the sun from rising from the darkness, so also believe there is nothing which stops the sun of righteousness, Jesus, from raising the dead to new life. Jesus Christ is the light of the world; the light no darkness can overcome. The Lord proclaims, “…for you who fear my name, the sun of righteousness shall rise with healing in its wings. You shall go out leaping like calves from the stall” (Malachi 4:2). So if you, like me, have been captivated by the beauty of the king of day rising over the earth each morning light, then take hold of God’s promise by faith and rejoice in the transcendent peace of the King of glory in rising from the darkness of death to light of life.

Oh, then, draw away your hearts
Now from pleasures base and hollow.
There to share what He imparts,
Here His footsteps ye must follow.
Fix your hearts beyond the skies,
Whither ye yourselves would rise.