“For the kingdom of heaven is like a landowner who went out early in the morning to hire laborers for his vineyard. Now when he had agreed with the laborers for a denarius a day, he sent them into his vineyard. And he went out about the third hour and saw others standing idle in the marketplace, and said to them, ‘You also go into the vineyard, and whatever is right I will give you.’ So they went. Again he went out about the sixth and the ninth hour, and did likewise. And about the eleventh hour he went out and found others standing idle, and said to them, ‘Why have you been standing here idle all day?’ They said to him, ‘Because no one hired us.’ He said to them, ‘You also go into the vineyard, and whatever is right you will receive.’ So when evening had come, the owner of the vineyard said to his steward, ‘Call the laborers and give them their wages, beginning with the last to the first.’ And when those came who were hired about the eleventh hour, they each received a denarius. But when the first came, they supposed that they would receive more; and they likewise received each a denarius. And when they had received it, they complained against the landowner, saying, ‘These last men have worked only one hour, and you made them equal to us who have borne the burden and the heat of the day.’ But he answered one of them and said, ‘Friend, I am doing you no wrong. Did you not agree with me for a denarius? ‘Take what is yours and go your way. I wish to give to this last man the same as to you.  ‘Is it not lawful for me to do what I wish with my own things? Or is your eye evil because I am good?’ So the last will be first, and the first last. For many are called, but few chosen.”  Matthew 20:1-16

Salvation unto us has come

By God’s free grace and favor

They help and save us never.

Who did for all the world atone;

He is our one Redeemer. 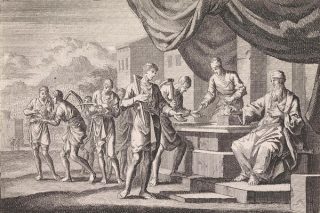 The topic is grace, but the story is about work.  Our Gospel Lesson for today is a parable about people working in a vineyard.  It’s about work.  But Jesus told the story to illustrate for us the meaning of grace.  Jesus’ story about workers in a vineyard teaches what St. Paul taught when he wrote, “But to him who does not work but believes on him who justifies the ungodly, his faith is accounted for righteousness.” (Romans 4:5)

The true Christians believe that Jesus is their Savior from sin, death, and hell.  They believe what God promises them in Christ and through their faith they receive what the promises promise.  Since Jesus has already rescued them from the punishment of their sins, they know and believe that they are righteous before God.  They don’t have to win over God’s heart.  They already have his favor.  They are saints.  They are forgiven of all their sins.  They are clothed in the righteousness of Christ.  They are heaven-bound.  They do good deeds because God has already made them good by forgiving them all their sins.

False Christians may say that they believe in Jesus.  They may confess the Apostles’ Creed, pray the Lord’s Prayer, kneel at the altar and eat and drink the body and blood of Jesus, given and shed for them for the forgiveness of sins.  But they are not Christians.  They hold to a false faith.  They trust in their own good deeds.  They believe that they earn God’s grace by doing good.  While they pay lip service to Jesus, calling him Savior, they don’t trust in his salvation.  They are working their way to heaven.  They are gaining an eternal reward by doing good.  They are thereby insulting the suffering of Jesus, trampling on his blood, and despising the grace of God in Christ.

The false Christians are paid by the work they do.  They receive the praise of the world.  But when they are done doing all the work they have done, the owner of the vineyard tells them: “Take what is yours and go your way.”  Go your way.  They have no fellowship with God.  They are not children of God.  They never knew God.  They knew only their own labor.

Those who trust in their own good deeds are scandalized by God’s grace.  They look at religion as a job.  They judge religion the way people judge jobs.  You put in so many hours and you get so much money per hour.  You earn the money you receive.  You worked for it.  The false Christians apply the standards of the workplace to the kingdom of heaven.  If this is how it is in the job market, this is how it must be in God’s kingdom as well.  They fashion God in their own image.  This is the way things work.  Therefore, this is the way God works.

The true Christians know that God doesn’t think like we think.  His kingdom is a kingdom of grace.  You work, not for pay, but for the joy of it.  The false Christians, who worked for twelve long hours enduring the burden and heat of the day, settled up front what their payment would be.  They were working for pay.  Those who were hired later, whose work flew by without them breaking a sweat, didn’t ask for a specific wage, nor were they promised one.  They wanted to work.

Come to Me, all you who labor and are heavy laden, and I will give you rest.  Take My yoke upon you and learn from Me, for I am gentle and lowly in heart, and you will find rest for your souls.  For My yoke is easy and My burden is light.”  Matthew 11:28-30

Those who don’t trust in God’s grace look at their work as a burden.  That’s because it is a burden.  When you are trying to make yourself righteous before God by doing righteous things, you will never succeed.  If you consult God’s law to see how well you’re doing, you won’t be happy with what you see, so instead of judging yourself by God’s standards, you’ll become your own standard and compare yourself to others who aren’t as good as you.  You will justify yourself by comparing yourself to people who haven’t done as many good things as you have done.  That’s an irony for you.  Standing in judgment of others is a sin, and now this sin has become your claim to righteousness!

But that’s the way it must be for those who are working their way to heaven, earning God’s approval, and relying on their hard labor to get whatever God has got to give.  To which our Lord Jesus says, “So the last will be first, and the first last. For many are called, but few chosen.”  You put yourself first and you will be made last.  You exalt yourself and you will be humbled.  You stand on your pride and you will be abased.  You elevate yourself at the expense of your neighbor and God will see to it that your neighbor stands above you.  Even the ancient pagans knew that pride goes before the fall.

Treating those who worked just an hour or two the same as those who worked for twelve hours seems unfair.  God’s grace seems unfair, but it is only unfair to those who despise it.  It doesn’t trouble those who trust in it.  Jesus explains: “Many are called, but few chosen.”  The gospel call goes out to everyone.  God so loved the world, says Jesus in John 3:16.  Christ died for all, St. Paul writes in 2 Corinthians 5:15.  Jesus commands that all nations everywhere be taught the gospel, baptized, and instructed in the Christian religion: the young and old, black and white, male and female, rich and poor, all people everywhere.  Many are called.  Many means everyone everywhere.

But few are chosen.  Few believe.  It’s not that God doesn’t want everyone to believe.  He does.  But there are so many things that come between sinners and God’s grace to prevent them from trusting in it.  So many things prevent people from trusting in God’s grace, and none of them, no not a single one of them, comes from God.  God’s grace is sincerely extended to everyone.  God’s love encompasses the whole world.  What stands between God’s grace and the sinner is always the sinner’s fault.  God earnestly calls him, but the sinner would rather do it his own way.

Many are called, but few chosen.  Salvation is by grace alone.  I cannot rely on my decision, my will, my work, my prayers, my piety, my religious pedigree, or my association with good, decent, and holy people.  If I am to be rescued from the sin that would tear me away from God and consign me to eternal damnation, God must rescue me without any help from me, for when I begin to trust in what I have done for God I lose my trust in Christ alone for my salvation.

Do you fret over whether you have been chosen?  Don’t fret.  Instead, know this: if you are trusting in Jesus for your salvation, in his blood and righteousness, and not in your own strength, merits, or works, this is God’s gracious work in you.  He called you by his word and by that same word he chooses you and keeps you in the faith.  Hold onto his gospel.  Confess your sins to God every day and take to heart Christ’s absolution.  He who died for you and rose again, who has baptized you, absolved you, and given you his body and blood to eat and to drink, tells you he has rescued you from all your sins and prepared a place for you in heaven.  He has the right to give to you what belongs to him.  He’s your Savior.  A Savior saves.

Christ alone is our salvation

Christ, the Rock on which we stand

Other than this sure foundation

Will be found but sinking sand

Christ, his cross and resurrection,

Is alone the sinner’s plea

At the throne of God’s salvation

Nothing else can set him free.