Then He took the twelve aside and said to them, “Behold, we are going up to Jerusalem, and all things that are written by the prophets concerning the Son of Man will be accomplished.  For He will be delivered to the Gentiles and will be mocked and insulted and spit upon.  They will scourge Him and kill Him. And the third day He will rise again.”  But they understood none of these things; this saying was hidden from them, and they did not know the things which were spoken.  Then it happened, as He was coming near Jericho, that a certain blind man sat by the road begging.  And hearing a multitude passing by, he asked what it meant.  So they told him that Jesus of Nazareth was passing by.  And he cried out, saying, “Jesus, Son of David, have mercy on me!”  Then those who went before warned him that he should be quiet; but he cried out all the more, “Son of David, have mercy on me!”  So Jesus stood still and commanded him to be brought to Him. And when he had come near, He asked him, saying, “What do you want Me to do for you?” He said, “Lord, that I may receive my sight.”  Then Jesus said to him, “Receive your sight; your faith has made you well.”  And immediately he received his sight, and followed Him, glorifying God. And all the people, when they saw it, gave praise to God. Luke 18:31-43 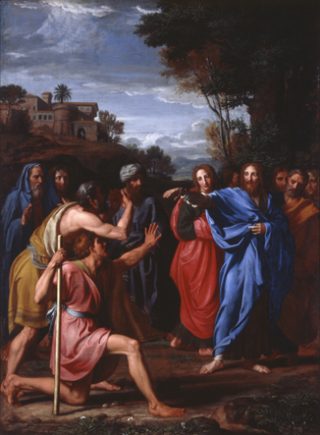 Jesus said to his disciples, “Behold, we are going up to Jerusalem.”  Now that’s a clear statement.  Nothing ambiguous or troubling about that!  Why shouldn’t the Christ, the Son of David, go to Jerusalem?  Is it not God’s holy city?  Is it not the mountain of God’s temple where he would come to his people and graciously forgive them their sins and claim them as his own?  Why shouldn’t God in the flesh go with his chosen disciples to Jerusalem?

Jesus continued, “And all things that are written by the prophets concerning the Son of Man will be accomplished.”  As well they should be!  Is Jesus not the fulfillment of biblical prophecy?  Should not the prophetic word be fulfilled?  Jesus is no pretender, no mere poseur; he is the substance of the Holy Scriptures – the central topic of the prophetic word.

Jesus went on to say, “For He will be delivered to the Gentiles and will be mocked and insulted and spit upon.  They will scourge Him and kill Him.”  No!  That could not be.  They must have misunderstood.  The disciples didn’t know what Jesus was talking about.  It made no sense to them at all.  The fact that the Bible foretold it didn’t register on their minds.  It was hidden from them.  Jesus’ final words, “And the third day He will rise again,” didn’t even register as they recoiled in horror at the idea that their beloved Lord and teacher would be so brutally mistreated.  The grace of God was concealed.  It was concealed in his mistreatment and suffering.  It was unthinkable that a man so full of mercy should be treated so unmercifully.

But when the blind beggar cried out to Jesus for mercy and Jesus gave the man his sight they understood quite well what had happened.  The beggar pleaded for mercy.  Jesus replied, “Receive your sight; your faith has made you well.”  Then what happened?  Immediately after Jesus said, “Receive your sight,” he received his sight.  That the disciples could understand.  It was plain to them.  They, together with everyone who witnessed the event, gave praise to God for the wonderful miracle.

God’s mercy is concealed in Christ’s suffering.  We confess in the Creeds that Jesus is true God and true man.  He is God, begotten of the Father before all worlds.  He is a man, conceived by the Holy Ghost and born of the Virgin Mary.  The true deity of Christ is always concealed in his true humanity.  While his closest disciples didn’t quite understand this, the blind man did.  We learn from the blind man who begged for mercy.  He was told that Jesus of Nazareth was passing by.  But he did not cry out, “Jesus of Nazareth, have mercy on me.”  No, he cried out, “Jesus, Son of David, have mercy on me.”  Calling Jesus the Son of David was confessing Jesus as the Christ, the Son of the living God.  Seeing in Jesus the man his God and Savior, he cried out for mercy to the one who could show him mercy.  And he would not be deterred.

The apostles did not know the Apostles’ Creed.  But blind Bartimaeus did.  The one who would suffer scorn, ridicule, mockery, whipping, and crucifixion was the gracious and merciful Lord who could give him his sight.

We must become blind.  The most merciful man they had ever known couldn’t possibly be subject to such cruelty and abuse and mistreatment.  So they think.  But they are wrong.  Not only could he, he must be.  That’s what the prophets had said, after all, and their words were God’s words.

For dogs have surrounded Me; the congregation of the wicked has enclosed Me.  They pierced My hands and My feet; I can count all My bones.  They look and stare at Me.  They divide My garments among them, and for My clothing they cast lots. (Psalm 22, 16-18)

The Lord God has opened My ear; and I was not rebellious, nor did I turn away.  I gave My back to those who struck Me, and My cheeks to those who plucked out the beard; I did not hide My face from shame and spitting. (Isaiah 50, 5-6)

Surely He has borne our griefs and carried our sorrows; yet we esteemed Him stricken, smitten by God, and afflicted.  But He was wounded for our transgressions, He was bruised for our iniquities; the chastisement for our peace was upon Him, and by His stripes we are healed.  All we like sheep have gone astray; we have turned, every one, to his own way; and the Lord has laid on Him the iniquity of us all.  He was oppressed and He was afflicted, yet He opened not His mouth; He was led as a lamb to the slaughter, and as a sheep before its shearers is silent, so He opened not His mouth.  He was taken from prison and from judgment, and who will declare His generation?  For He was cut off from the land of the living; for the transgressions of My people He was stricken.  (Isaiah 53, 4-8)

The rejection of Jesus, the suffering of Jesus, the punishment heaped upon him, the shame, the spitting, the contempt – it was all the very opposite of mercy.  Everything Jesus was not is what he received and suffered.  And that’s how it had to be.  That is how God’s mercy comes to us.  Christ suffers gross injustice.  What he is really suffering is our sins.  And what he suffers he removes.  By receiving the opposite of mercy he brings mercy to us.  Concealed under his mistreatment is the mercy for which we cry.

First we become blind.  God opens our eyes by revealing what was concealed under the suffering and death of his Son.  Then we become beggars.  For faith isn’t the self-confident boast of religious do-gooders.  Faith is the helpless cry of the beggar:

Lord, have mercy upon us;

Christ, have mercy upon us;

Lord, have mercy upon us.

That’s the Kyrie.  Kyrie is the Greek word for Lord.  The Kyrie is one of the oldest parts of the liturgy and is found in both the Sunday services and the daily morning and evening services of the Church.  In the Divine Service for Sunday the Kyrie comes at the beginning.  In the Vespers it comes near the end.  It forms the worship of the Church.

We look to Jesus.  Not merely Jesus of Nazareth the famous miracle worker who had compassion on the unfortunate.  More than that, he is Jesus the Son of David.  Son of David means Christ.  Christ means the fulfillment of the Old Testament Scriptures.  The fulfillment of the Old Testament Scriptures means the One who goes to Jerusalem, is delivered to the Gentiles and is mocked and insulted and spit upon, whipped and crucified.  This is the One to whom we look for mercy.  The mercy we seek is the mercy concealed in his suffering and death.

But he is risen.  On the third day he rose from the dead according to the Scriptures, that is, just as the Scriptures said he would.  David wrote for Christ in Psalm 16 where we read:

Therefore my heart is glad, and my glory rejoices; My flesh also will rest in hope.  For You will not leave my soul in the grave, nor will You allow Your Holy One to see corruption. (Psalm 16, 9-10)

David wrote as a prophet about the resurrection of Christ from the dead.  He wrote of the Holy One of God – true God and true man – who suffered and died and rose again.  He rose from the dead with mercy to give to blind beggars who cry out to him.  So we come to church and gather together with beggars like ourselves to receive with blind Bartimaeus the mercy that only Christ can give.

Two things are necessary.  First, the mercy must exist and be intended for us.  Second, the mercy must be given to us.  So that the mercy would exist for us, our merciful Lord Jesus had to go to the cross to suffer.  He had to suffer in the place of sinners.  He had to bear the shame of the spittle and the mockery, and the suffering of the scourging and crucifixion.  There he took our place under the law and suffered the wrath of God as the substitute for all sinners.  He, who knew no sin, was made to be sin for us.  There, in the suffering of Jesus is the mercy of God.  It was necessary for us that he suffer.  Apart from his suffering there would be no mercy for us for by his suffering he took away our sin.

Second, the mercy must be given to us.  God must speak to us.  This is why we come to church, not just once in a while, but as often as we can.  We come and we cry out for mercy and Jesus has mercy on us.  He forgives the sins he bore on the cross.  He feeds us with his body and blood, given and shed for us for the forgiveness of sins.  He brings to us the peace that he established between God and us and sets our hearts at peace.  The mercy concealed in his suffering is revealed in his word and strengthens and sustains us in the true faith.

So here we are, blinded by sin, and begging Christ for mercy, joining with that blind beggar singing the Kyrie.  And it is to us that Jesus says, “Receive your sight; your faith has made you well.”