The Second Sunday after Epiphany

On the third day there was a wedding in Cana of Galilee, and the mother of Jesus was there.  Now both Jesus and His disciples were invited to the wedding.  And when they ran out of wine, the mother of Jesus said to Him, “They have no wine.” Jesus said to her, “Woman, what does your concern have to do with Me? My hour has not yet come.”  His mother said to the servants, “Whatever He says to you, do it.”  Now there were set there six waterpots of stone, according to the manner of purification of the Jews, containing twenty or thirty gallons apiece. Jesus said to them, “Fill the waterpots with water.” And they filled them up to the brim.  And He said to them, “Draw some out now, and take it to the master of the feast.” And they took it.  When the master of the feast had tasted the water that was made wine, and did not know where it came from (but the servants who had drawn the water knew), the master of the feast called the bridegroom.  And he said to him, “Every man at the beginning sets out the good wine, and when the guests have well drunk, then the inferior. You have kept the good wine until now!”  This beginning of signs Jesus did in Cana of Galilee, and manifested His glory; and His disciples believed in Him.  John 2:1-11

God is man; man to deliver

His dear Son now is one with our blood forever.

But his humiliation came to an end.  It ended when he died.  He humbled himself and became obedient all the way to the death of a cross.  Then he was exalted.  He remains exalted as he sits at the right hand of the Father and intercedes for us all.  From thence he shall come to judge the living and the dead.

During his thirty three years of humiliation he did not always fully use his divine powers.  He hid his power under humility.  In this way he could take our place and live our lives for us.  But he did reveal his divine power.  He showed the world who he was.

This is what the Church focuses on during the Epiphany season.  The Gospel lessons show us how Jesus manifested his glory. 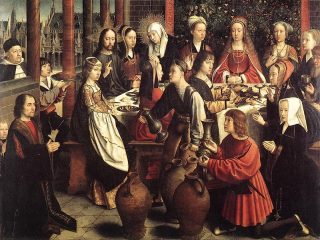 Last week we saw how the twelve year old boy displayed knowledge that amazed the theological professors at the temple.  Today we see how Jesus manifested his glory at the wedding of Cana.

Epiphany means to shine upon.  The glory of God shines forth in Christ showing Christ to be God in the flesh.  The true deity of Christ is essential.  This is not a detail of the Christian faith.  It is at its very heart.  If Christ is not true God – equal to the Father – then he cannot be our Savior from sin, death, and hell.  If Christ is not true God we are dead in our sins and have no hope for eternal life.  This is why the Church must at all times and in all places teach and confess this precious truth.  Jesus Christ shines forth his true deity in doing what only God can do.

Jesus manifested his glory when he turned water into wine at the wedding of Cana.  Now water becomes wine in a natural way and we don’t call it miraculous.  We take it for granted that the water will come down from the sky and cause the grapes to grow.  The grapes will be harvested and crushed and become wine.  It takes time.  A certain procedure has to be followed.

A miracle is when God decides to bypass the normal procedures and to do things directly.  In so doing he shows he is in charge of everything.  Jesus did miracles in order to teach us.  This is why the Bible calls them signs.  Signs signify things.  The very first miracle Jesus did was changing water into wine.  As with all of the miracles, it was a sign signifying that Jesus is true God.  He did what only God could do.

It was also a sign signifying that God does all things well.  Moses records in Genesis 1:31,

Then God saw everything that He had made, and indeed it was very good. So the evening and the morning were the sixth day.

It was very good.  The wine that Jesus made was very good.  The custom was to serve the best wine first because after drinking a bit of wine the taste buds become dulled and cannot discriminate as well.  I should point out an unfortunate translation by the New International Version that reads:

“Everyone brings out the choice wine first and then the cheaper wine after the guests have had too much to drink; but you have saved the best till now.”

That’s not what the text says.  The New King James is correct in translating it, “When the guests have well drunk.”  Jesus did not provide wine for people who had already had too much to drink.

The Bible teaches us that wine is a positive blessing from God.  In listing the blessings God provides for man and beast, the psalmist writes,

He makes grass grow for the cattle, and plants for people to cultivate— bringing forth food from the earth: wine that gladdens human hearts, oil to make their faces shine, and bread that sustains their hearts. (Psalm 104:14-15)

On the other hand, the Bible also teaches that wine can be a curse as well as a blessing.  Solomon writes,

Wine is a mocker and beer a brawler; whoever is led astray by them is not wise.  (Proverbs 20:1)

Jesus changed water into wine to prove his true deity.  He changed water into good wine because everything God creates is good.  God is not the author of evil or sin.  Drinking alcoholic beverages is not a sin.  Getting drunk is a sin.  There are enough real sins of which we Christians are guilty without folks inventing new ones by which to judge their neighbors.  The Bible does not condemn the use of alcohol in moderation and neither should those who speak in Christ’s name.

Years ago I used to read a magazine edited by a Fundamentalist preacher by the name of John R. Rice.  He claimed that all drinking of any alcohol was a sin.  He argued that if it took six beers to get drunk then drinking one beer made you one sixth drunk and that was a sin.  He thought he had it all figured out.

This is a common practice of religious folks throughout the ages.  It’s called putting a hedge around the law.  At what point does dancing become lustful and therefore a sin?  Better forbid all dancing, just in case.  At what point has someone had too much to drink?  Better forbid all drinking, just in case.  The idea is that we prevent sin by putting a hedge around the law, keeping people from crossing over the line.

God’s law is that you love him with your whole heart, soul, strength and mind and that you love your neighbor as yourself.  The commandments explain how this is done.  Sin is breaking God’s law.  Righteousness is conforming to it.  It’s all about love.  It’s not about rules.

This is symbolized in today’s Gospel lesson by the six waterpots filled with water that was used according to a Jewish ritual of purification.  The number six has symbolic meaning.  It is one short of seven.  Seven is the perfect number.  It signifies God blessing the world.  God rested on the seventh day.  The number six is short of seven.  It is symbolic of coming short of what is perfect.  The rules of purification were inadequate.  They provided no peace and no rest.  They are just water and not wine.

Christ sanctifies marriage.  He does so, not by establishing a system of rules for us to follow so that husbands and wives can judge one another on how many rules the other one breaks.  No, he sanctifies marriage by giving up his life for his bride, the holy Christian Church.  He purchases her by his precious blood.  He loves her with a perfect love.  He holds nothing back.  He does not think of his own best interests.  He thinks of hers.  So he dies for her.  As we sing:

With his own blood he bought her and for her life he died.

Our marriages are filled with selfishness and sins.  The husband wants to be the head but he doesn’t want to serve his wife.  But Christ becomes the head of the Church precisely by serving her, giving his life for her.  The wife does not want to submit to her husband.  She’d rather be his boss.  But the Church becomes the Church precisely by submitting to the service of Christ.  She takes his name and she receives his grace and she willingly finds her new identity in him.

Leave it to me, he said.  My hour has not yet come.  But Jesus’ hour did not come at a wedding celebration.  His hour came when he faced the powers of darkness, when he prayed all alone, when he sweat drops of blood, when he was betrayed into the hands of sinners, when he was whipped, mocked, and finally crucified.  There his hour came.  It was for that hour that he came into this world.  There it was that he took away all our sin.  There it was that he sanctified marriage with his own blood.

Marriage is hard work.  No relationship in this life is closer than that of husband and wife.  They become one flesh.  Everything that has to do with our bodily needs is a part of marriage: talking, eating, sleeping, picking up messes, overlooking weaknesses, defending, protecting, respecting, and above all, forgiving.

We husbands and wives need to see ourselves as our Lord Jesus sees us.  He looks at his bride, the Holy Christian Church, as beautiful, spotless, and free from blame.  And so we should see ourselves.  There is no man more precious to a woman than her husband.  There is no woman more precious to a man than his wife.  Not somebody else’s husband.  Not somebody else’s wife.  The husband God gave you is God’s gift to you.  The wife God gave you is God’s gift to you.  And if the sins you see in your spouse give you grief, then, when you daily confess your sins to God, take to heart that the forgiveness he gives you for Christ’s sake he gives to your spouse as well.  And so should you.

This is what makes marriage a joy and a wonderful blessing here on earth.  The wine that gladdens our hearts is the blood of Jesus Christ God’s Son that cleanses us from all sin, strengthens us in the true faith, and enables us to love one another even as God has first loved us.