The Sunday after Christmas

“The Fullness of Time Is Come!”

Click here to listen to audio of a sermon.

Now I say that the heir, as long as he is a child, does not differ at all from a slave, though he is master of all, but is under guardians and stewards until the time appointed by the father.  Even so we, when we were children, were in bondage under the elements of the world.  But when the fullness of the time had come, God sent forth His Son, born of a woman, born under the law, to redeem those who were under the law, that we might receive the adoption as sons.  And because you are sons, God has sent forth the Spirit of His Son into your hearts, crying out, “Abba, Father!”  Therefore you are no longer a slave but a son, and if a son, then an heir of God through Christ. Galatians 4:1-7

Time, like an ever-rolling stream,
Bears all its sons away;
They fly, forgotten, as a dream
Dies at the opening day.

Well, that’s what Watts wrote, anyway.  Some time back in the seventies or eighties, when political correctness started invading the church and making up new rules for us to obey, the words of the hymn, “bears all its sons away” were changed into “soon bears us all away,” so as not to offend the sensibilities of moderns who feel that the word “sons” might exclude members of the female sex.  Isaac Watts would roll over in his grave to see his poetry mangled and his sound theological observation lost.  The point is that there are sons of time and there are sons of God.  Sons of time live under the bondage of rules.  Sons of God live free lives by the power of the Spirit.  Sons of time are perpetually children.  Even if they are heirs of great wealth, they cannot touch it or benefit from it.  They are, in effect, slaves.  But when the Son sets you free you are free indeed.

That is what Christmas is all about.  Before Jesus Christ was born, God’s children were but children.  He had constructed for them a system of rules that placed upon them positive obligations and negative prohibitions in all areas of life: health, diet, religious observances, civil law, and so forth.  The Law of Moses is summarized in the Ten Commandments, but it included many regulations designed to flesh out the requirements of the Ten Commandments in very specific and concrete ways.  A system of rules was necessary to teach God’s children what holiness and righteousness were all about.

But no amount of rules can make us holy.  Children are taught to obey the rules.  A child who does not learn to obey the rules that govern us all will likely become a failure in life.  To live a successful life in this world requires that you conform to the standards that apply to us all.  Those who set themselves outside of the law set themselves above others.

But obedience to the rules doesn’t change what you are.  If your heart is not right with God and your will is not directed to do God’s will, you don’t become good by obeying the rules.  You can only cover up the sin within you.  That’s what most religion is all about.  It’s about covering up, putting on a mask, posturing, pretending, and behaving in a generally hypocritical fashion.  That’s why folks talk about religious hypocrites.  Religion and hypocrisy go together.

The system of rules that God gave to his Old Testament people were not just to teach them God’s moral law.  There was a higher purpose.  They were to identify for them their Savior.  The children were being prepared for adulthood.  Someday the pictures and shadows imbedded in the religious regulations they followed would give way to the substance of what they depicted.  The fullness of the time would come.  It came on Christmas.

Christmas is not the celebration of universal religious impulses.  Jesus is not like Santa Clause.  Santa changes from time to place to meet popular demand.  He’s an idea.  Nobody but a little child takes him literally.  The idea of a kind man giving gifts to the good little boys and girls all over the world to reward them for being good is socially beneficial.  Children should be encouraged to behave.  It is good to promote the virtue of generosity.

The real Christmas is not an idea.  It’s a specific event.  It happened at a specific time in a specific place.  Caesar Augustus issued a census of the Roman world, sending Joseph and Mary to their ancestral home of Bethlehem, where Jesus was born.  This was the fullness of time.  Everything that happened beforehand pointed forward to it and everything that has happened since hearkens back to it.  Our future is grounded in the past.  The historical fact of Christ’s birth, life, death, and resurrection from the dead is not a religious motif, or myth, or idea.  It happened in space and time in the fullness of time. 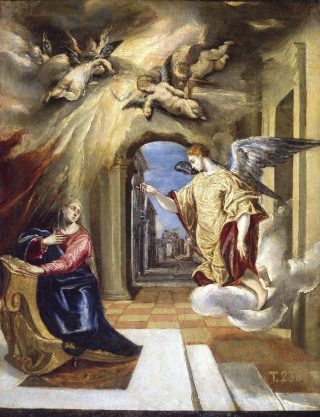 God send forth his Son.  We note two things about his birth.  The first is that he was born of a woman.  No man had anything to do with it.  She was a virgin.  It was a miraculous birth.  Jesus had no human father.  He was preserved from any taint of original sin.  His is the only immaculate conception and virgin birth in all of history.  The Son that God sent forth has his nature.  He is God of God from eternity.  In the fullness of time the eternal God became flesh and blood, taking on our human nature, and was born of a woman.

Now the word son here applies to men and women, boys and girls, old folks and infants.  All Christians are sons of God.  The word “sons” denotes our rights as Christians.  We are not slaves.  We are not hired hands.  We are not employees.  We are not distant relatives or next door neighbors.  We are heirs with full rights to enjoy our inheritance right now.

We are not under guardians who tell us what to do, and when and where to do it.  We are not children under the bondage of the elements of this world.  We are sons by adoption, by rebirth in Holy Baptism, by the Holy Spirit, and as such everything that belongs to God’s only begotten Son is ours.

It is the Holy Spirit himself who enables us to believe this, confess this, and claim the treasures that Christ has won for us.  The Father sends his Son.  The Son redeems us. 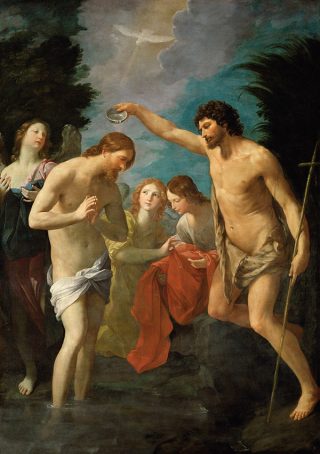 He purchases our release from the guilt of sin, the judgment of the law, and the threat of death.  He does so by his holy life and sacrificial death for us all.  Then the Father sends the Holy Spirit – the Spirit of his Son – into our hearts who elicits from us the prayer of faith: “Abba, Father!”

Time means death and decay.  It is a brutal enemy.  Beauty fades.  Christmas presents picked out with care are lost, broken, and forgotten.  Wealth, beauty, and status disappear in time.  When they are gone, those who trusted in them are poor.  The sons of time are carried away in that ever rolling stream that runs into the sea of destruction.

That is not the future of the sons of God.  They are not bound to the dying of this world, but are children of the eternal God.  This is what Christmas means.  The eternal Son of God who was born of a woman and placed himself under the law has purchased our release from the bondage of rules, regulations, and other time bound restrictions and has ushered us into the very presence of God.  We call God Father and he hears us.  We run to him as children to their loving father and he receives us.  He fills us with the Holy Spirit who gives us the confidence that we are clothed in the righteousness of Jesus Christ, holy, acceptable to God, and have the status of children who are full heirs of every good gift.

You don’t receive Christ by obeying rules.  You don’t become a son of God by submitting to God’s law.

You don’t gain spiritual freedom by putting into practice spiritual principles.  Rather, it is as Paul wrote just a little earlier in this Epistle:

For you are all sons of God through faith in Christ Jesus. For as many of you as were baptized into Christ have put on Christ.  Galatians 3:26-27

Christmas means that we are justified by God through faith alone, and not by our works.  Jesus did the works.  Faith is not works.  It is not submission.  It is not putting something into practice.  Faith hears the promise of the gospel and says: “It is for me.  It is for me that Jesus was born, lived, died, and rose again.  God forgives me.  God gives me eternal life.  God has given me the Spirit of his Son and made me an heir.”

You don’t need to knock.  You can walk right in.  You don’t need to wait for permission.  You have permission.  Come on in and sit down at the table and eat.  It’s all prepared for you.  You’re not a guest.  This is your home.  Everything that belongs to your heavenly Father belongs to you because he is yours and you are his.  Did not his Son redeem you?  Was he not born of a woman and born under the law to purchase your release from the law’s judgment and curse?  You are a baptized Christian!  By faith you have all the riches of God’s grace.  He forgives you all your sins.  He fills you with his Spirit, the Spirit of his Son.  He sets your heart at peace.  He assures you every day that time cannot destroy what your Savior Jesus has won for you.  He is eternal.  So are the treasures he gives.  They were purchased for you in the fullness of time and they will last forever.

See, my soul, thy Savior chooses
Weakness here and poverty,
In such love He comes to thee
Nor the hardest couch refuses;
All He suffers for thy good,
To redeem thee by His blood.

Joy, O joy, beyond all gladness,
Christ hath done away with sadness!
Hence, all sorrow and repining,
For the Son of Grace is shining!