The Fourth Sunday in Advent

“Make Straight the Way of the Lord”

Now this is the testimony of John, when the Jews sent priests and Levites from Jerusalem to ask him, “Who are you?”  He confessed, and did not deny, but confessed, “I am not the Christ.”  And they asked him, “What then? Are you Elijah?” He said, “I am not.” “Are you the Prophet?” And he answered, “No.”  Then they said to him, “Who are you, that we may give an answer to those who sent us? What do you say about yourself?”  He said: “I am ‘The voice of one crying in the wilderness: “Make straight the way of the LORD,” ‘ as the prophet Isaiah said.”  Now those who were sent were from the Pharisees.  And they asked him, saying, “Why then do you baptize if you are not the Christ, nor Elijah, nor the Prophet?”  John answered them, saying, “I baptize with water, but there stands One among you whom you do not know.  It is He who, coming after me, is preferred before me, whose sandal strap I am not worthy to loose.”  These things were done in Bethabara beyond the Jordan, where John was baptizing. John 1:19-28 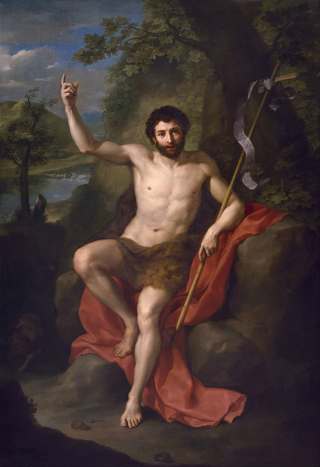 He only speaks for Christ.  But he does speak for Christ.  He won’t deny that.  He’ll not back away from that.  His words are God’s words.  So when he confesses that he is not the Christ he is by no means denying that what he says is the truth.  He knows he speaks the truth that is from God.  He is the voice of God.

John did not claim any special status for himself.  But he most certainly did claim divine authority for what he said.  John himself is no big deal.  He isn’t worthy of tying or untying Jesus’ shoes.  He claims nothing for himself.  He’s not Elijah.  He’s not the Prophet.  He’s nobody special.

But you’d better listen to what he says!  He says, “Make straight the way of the Lord.”  He says what God, through the prophet Isaiah, gave him to say:

Prepare the way of the LORD; make straight in the desert a highway for our God.  Every valley shall be exalted and every mountain and hill brought low; the crooked places shall be made straight and the rough places smooth; the glory of the LORD shall be revealed, and all flesh shall see it together; for the mouth of the LORD has spoken.

Now John is but a voice.  He calls no one to follow himself.  He directs everyone who hears his voice to Jesus.  But if this is so, why does he baptize?  Clearly, baptism entails allegiance to someone.  There is no such thing as a generic baptism.  Baptism always has a brand name.  But who is John?  What brand is he?  Not the Christ?  Not Elijah?  Not the Prophet?  Just a voice?  Why then do you baptize?  What kind of a baptism is it?

There were many different kinds of ceremonial washings among the Jews of John’s day.  They were not sacraments.  They had no divine command or promise.  They were human customs.  They did not give the forgiveness of sins.  They were merely symbolic.  They had no more power than that of a reminder of a purity and holiness that they did not bestow.

The voice of one crying in the wilderness teaches us that we are all in the same boat.  We all have the same needs. 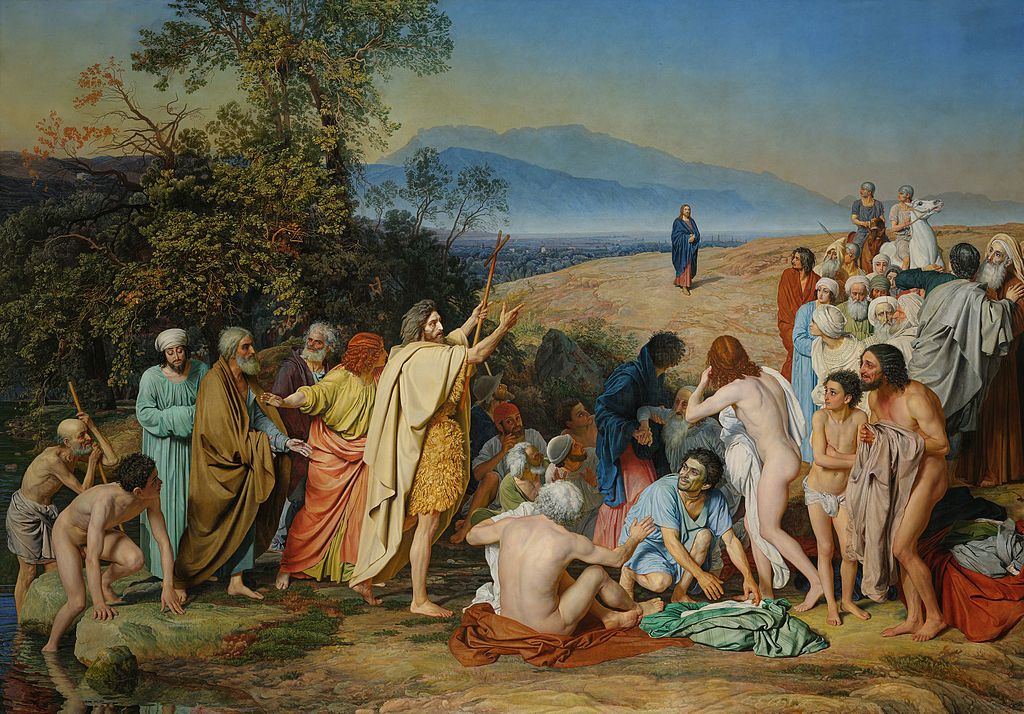 We need to prepare for the coming of God in the flesh.  God came in the flesh on Christmas.  This God in the flesh came thirty years later preaching the gospel of the kingdom.  This God in the flesh comes to us today in the Sacrament of the Altar and we prepare to receive him, in the words from the Proper Preface for Advent, “Whose way John the Baptist prepared, proclaiming Him the Messiah, the very Lamb of God, and calling sinners to repentance, that they might escape from the wrath to be revealed when He comes again in glory.”

And it is to me that the voice cries out: “Make straight the way of the Lord.”  And it is to you.  It is a universal call and it is a constant call and the call will continue to be cried out until Christ returns to judge the living and the dead.  All of us need to repent and we need to repent every day of our lives.

There is a popular but false view of repentance and grace that has taken hold throughout large portions of American Protestantism.  It’s an error of which we should be warned, so let me warn you of it.  The error is twofold.  First, it denies that Holy Baptism is a means of grace that provides us with the forgiveness of sins and eternal life.  Second, it falsely teaches that once someone has repented of his sins and come to trust in Jesus as his Savior he cannot be lost.  He cannot fall away.  This false doctrine holds to the slogan: “Once saved, always saved.”

By denying that Holy Baptism is a means of grace by which the Holy Spirit seals to us the forgiveness of sins, these errorists replace the Holy Spirit with the flesh.  They replace Holy Baptism with the decision of the believer, as if our decision has more power and validity than God’s washing.  Instead of Jesus coming to us in Holy Baptism and the Lord’s Supper and the preaching of the gospel, they have us coming to Jesus by making him the Lord of our lives by means of our sincere decision of faith.  Once we’ve made the decision of faith, it’s a done deal and we cannot fall away.  Choose Jesus as your Savior.  Invite him into your heart.  Then, you will ever after have the assurance of eternal life.  Eternity security will be yours!

They should listen to the voice of John crying in the wilderness.  When he said, “Make straight the way of the Lord,” he wasn’t talking about a one time decision we make.  He wasn’t saying that we enable him to come to us by making his way straight as if he cannot come to us without our help!

Listen to John.  Repentance is not a one time thing.  Repent and get it over with.  Repentance is lifelong.  Baptism is a one time thing.  God baptizes us once and once is enough.  John’s preparatory baptism was replaced by Jesus’ permanent baptism and we who have been baptized by the authority of Christ in the name of the Father, and of the Son, and of the Holy Ghost do not need to be baptized more than once.  This baptism is Christ graciously coming to us every single day of our lives.  But there has always been only one way to receive the grace of God in Christ.  And that is through faith.  And faith is born in repentance.

Repentance doesn’t bring Jesus to us.  He comes of his own free will.  Listen to the wonderful Advent hymn by Paul Gerhardt teaching us about our power and Christ’s coming:

Ye need not toil nor languish
Nor ponder day and night
How in the midst of anguish
Ye draw Him by your might.
He comes, He comes all willing,
Moved by His love alone,
Your woes and troubles stilling;
For all to Him are known.

We don’t make Jesus our Savior by drawing him to us.  He comes to us because he loves us.  But he comes to sinners.  And he comes to forgive. 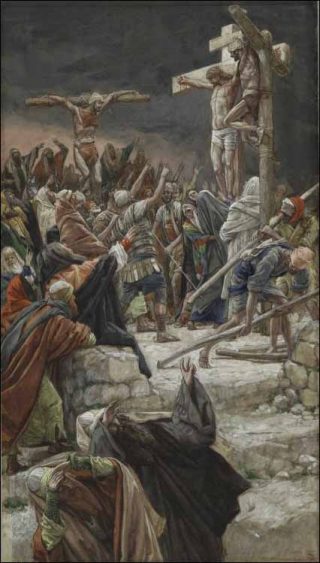 If you won’t be a sinner you cannot know him.  Only sinners need a Savior.  Only sinners can be saved from their sins.  Only sinners who know they are sinners and who mourn their sins and want them forgiven will have anything to do with him who came in the flesh and who comes in his holy means of grace.

Confess your sins to God.  Don’t hold on to them in stubborn insistence that you can do what you want to do.  Doing what you wanted to do is what caught you up in your sins in the first place.  You may be a Christian, but you’re still a sinner.  God doesn’t call on sinners to complain about how hard life is for them.  He calls on them to repent.  Confess.  Lay your burden of sin before the throne of God’s grace.

And take God’s word to heart.  He forgives you all your sins for Jesus’ sake.  Your faith doesn’t trust in your decision for Jesus.  It trusts in his decision for you.  He decided to take upon himself your body and blood.  He received your human nature from his mother Mary, but he was preserved from any taint of original sin.  Throughout his life of obedience and self-sacrificing love he avoided all sin.  He lived the only sinless life ever lived.  And he lived it for you.  He lived your life for you.  On the cross the Lord God become flesh, whose shoes no mere man is worthy to untie, took upon himself the shame of our sin.  He willing faced it in order to wash that sin away.

Now he comes to us and gives us the treasures he purchased for us by his holy life and death.  He chooses us as his own in Holy Baptism.  In his Supper he gives us to eat and to drink of the same body and blood by which he procured our liberty and eternal salvation.  Every time we hear the voice of his gospel we hear him.  He is not ashamed to claim us.  He remains Immanuel, God with us, forever.

Sin’s debt, that fearful burden,
Let not your souls distress;
Your guilt the Lord will pardon
And cover by His grace.
He comes, for men procuring
The peace of sin forgiven,
For all God’s sons securing
Their heritage in heaven.