The Twenty Second Sunday after Trinity

“I Believe in the Forgiveness of Sins”

Therefore the kingdom of heaven is like a certain king who wanted to settle accounts with his servants.  And when he had begun to settle accounts, one was brought to him who owed him ten thousand talents.  But as he was not able to pay, his master commanded that he be sold, with his wife and children and all that he had, and that payment be made.  The servant therefore fell down before him, saying, ‘Master, have patience with me, and I will pay you all.’  Then the master of that servant was moved with compassion, released him, and forgave him the debt.  “But that servant went out and found one of his fellow servants who owed him a hundred denarii; and he laid hands on him and took him by the throat, saying, ‘Pay me what you owe!’  So his fellow servant fell down at his feet and begged him, saying, ‘Have patience with me, and I will pay you all.’  And he would not, but went and threw him into prison till he should pay the debt.  So when his fellow servants saw what had been done, they were very grieved, and came and told their master all that had been done.  Then his master, after he had called him, said to him, ‘You wicked servant! I forgave you all that debt because you begged me.  Should you not also have had compassion on your fellow servant, just as I had pity on you?’  And his master was angry, and delivered him to the torturers until he should pay all that was due to him.  “So My heavenly Father also will do to you if each of you, from his heart, does not forgive his brother his trespasses.”  Matthew 18:23-35 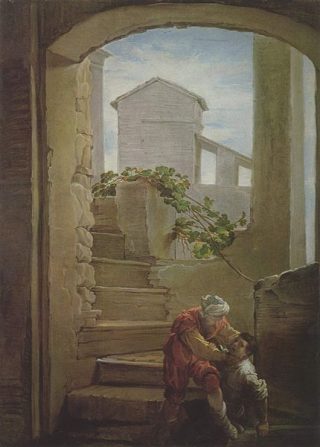 Tis all in vain that you profess

The doctrines of the church unless

You live according to your creed,

And show your faith by word and deed.

Observe the rule: To others do

As you would have them do to you.

So wrote the great Danish hymnist, Thomas Kingo.  He hit the nail on the head.  Actions speak louder than words.  On no point of Christian doctrine is this clearer than on the central topic of the Christian faith: “I believe in the forgiveness of sins.”

If you file doctrine away in a drawer and ignore it, and live a life disconnected from what you confess to believe, your confession is hollow.  We Christians are identified by what we confess.  What we confess is expressed in how we live.  The central topic of the Christian faith – that truth upon which everything else depends – is the teaching that God forgives and justifies us undeserving sinners by grace alone through faith alone, solely on the basis of his fatherly mercy in Christ Jesus who took away our sins on the cross.  Here is how we confess this precious gospel in the Augsburg Confession, Article IV:

Our churches also teach that men cannot be justified before God by their own strength, merits, or works but are freely justified for Christ’s sake through faith when they believe that they are received into favor and that their sins are forgiven on account of Christ, who by his death made satisfaction for our sins.  This faith God imputes for righteousness in his sight (Rom. 3-4).

Jesus teaches this gospel of the full and free forgiveness of sins in the first part of the parable that is before us today.  A servant owes his master ten thousand talents.  A talent of silver would be worth about ten thousand dollars by today’s measurement.  This means the man owed his master about one hundred million dollars.  There was no way the man could pay such a debt.  He was stuck.  Since he owed more than he could possibly pay, the king, according to the legal custom of the day, ordered that the man, his family, and all his possessions be sold so that payment would be made.

The man pleaded for mercy.  “Have patience with me, and I will pay you everything.”  That was a vain promise if there ever was one.  He couldn’t pay the debt.  In his desperation, he promised what he couldn’t deliver.  His master didn’t take his promise to repay seriously, but he took his plea for mercy seriously.  He had compassion on him.  He forgave him the debt.  He didn’t set down a payment plan whereby he and his heirs could repay the debt over a long period of time.  He forgave it freely without requiring any payment at all.

God forgives us all our sins freely, without requiring us any payment at all for our sins, not because no payment must be made, but because he has already paid the debt we owe him.  The master pays the servant’s debt.  St. Paul writes in Romans 3:24 that we are “justified freely by his grace through the redemption that is in Christ Jesus.”  Justification, or forgiveness, is impossible without redemption.  In other words, in order for God to forgive us the debt we owe him, the debt must be paid.  He is the only One who can pay it.  So he pays it for us.  The price is the holy precious blood and the innocent suffering and death of his Son.

Jesus bought our forgiveness with his own perfect obedience and suffering.  Jesus bought it.  God freely gives it.  Faith is the only way to receive it.  First we receive forgiveness through faith.  Then we forgive those who have sinned against us.  We cannot give what we don’t have.  Only those who are forgiven know how to forgive.  Those who don’t know how to forgive are those who have no faith.  They can’t give what they don’t have.  They don’t have the forgiveness that was freely given to them because they didn’t receive the forgiveness as a gift from a loving and gracious Father.

The servant who was forgiven a debt of millions of dollars refused to forgive a debt of a hundred denarii.  A denarius was a day’s wage, so the debt that was owed this man was not insignificant.  We are talking about over three months’ wages.  That’s real money.  He wasn’t willing to pay it out of his own pocket.  The man owed him.  So he demanded payment.  Well, you know how the story ends.  This unmerciful servant is put into debtors’ prison where he is tortured until he pays his debt of ten thousand talents, a debt he could never pay.  And Jesus warns us:

So my heavenly Father will also do to you if each of you, from his heart, does not forgive his brother his trespasses.

But wait.  Is this really fair?  Didn’t the king forgive the servant the debt?  How then can he renege on that promise and require him to pay the debt?  Was the debt freely forgiven or not?  If freely forgiven, why then does the king change the rules and make his forgiveness contingent on him forgiving others?  That’s not free!  That’s hard!  After all, there are people who have done us wrong – serious wrong, painful wrong, hurtful wrong – and we’re required to forgive them freely and completely with no strings attached and with no guarantee that they will change their behavior against us?  Such a requirement is too hard.  To require it means that forgiveness isn’t free after all!

This, brothers and sisters, is the reasoning of the hard-hearted unbeliever.  Forgiveness is given to faith.  Faith isn’t the willingness to make the deal, sign on the dotted line, and ignore what God says only to take what God gives.  Listen!  What he gives is what he says!  You cannot give lip service to his doctrine and claim you have believed it.  The faith that receives forgiveness from God defines the life of the one who receives it.  Forgiveness of sins is not just a doctrine to which we assent.  Forgiveness of sins is the blessed reality of our lives.  It is the heart of our existence.

Jesus tells us to eat and drink his body and blood to remember him.  St. Paul tells us that every time we eat and drink we proclaim his death.  Remember his death.  That’s where your sins were washed away.  For whom did he die?  He died for the one who has sinned against you, hurt you, deceived you, broken your heart, and brought you pain.  Jesus gave up his body and his blood for everyone.  Forgiveness of sins is for everyone.  It is not given to everyone because not everyone bothers listening to the gospel or receiving the sacraments and it is only through these means of grace that God’s forgiveness is given.  It is not received by everyone because not everyone believes the gospel and faith is the only way that God’s forgiveness can be received.  But there is no one for whom Jesus did not die.  There is no one for whom he did not shed his blood and his blood was shed for the forgiveness of sins.

I cannot live without it.  If God held me accountable for every sin of thought, word, and deed I have ever committed, I would have no peace, no joy, and no purpose in life.  My life would be dominated by a futile effort to escape the inescapable judgment of God.  What a wretched life that would be!  Nobody can bear the burden of his own sin.  This is why those who trust in – depend on, live on – the forgiveness of sins that God freely gives us for Christ’s sake will also freely forgive those who sin against them.  Forgiving those who don’t deserve our forgiveness is how we confess our faith in the God who forgave us when we didn’t deserve his forgiveness.

Forgiveness of sinners is not approval of their sin.  God doesn’t approve of our sin.  He becomes our brother and dies for it.  He bears its weight, its guilt, and its judgment.  That’s not approval of – that’s payment for!  We are not approving of the sins of those we forgive.  We are forgiving with the same forgiveness we have received.  God is not diminished by forgiving us undeserving sinners.  Christ prayed to his Father before his ascent to the cross,

Father, the hour has come.  Glorify your Son, that Your Son also may glorify you. (John 17:1)

Jesus told this parable in response to Peter’s question whether forgiving someone seven times was sufficient.  Jesus’ answer was not seven times, but seventy times seven times.  We forgive as often as we are sinned against.

Husbands and wives, mothers and daughters, fathers and sons, brothers and sisters – you do not forgive against your will.  You forgive as you have been forgiven because when God works in your heart the faith to receive forgiveness, by that same work he works in your heart the love to give forgiveness.  The doctrine of justification, that is, forgiveness of all our sins, by God’s grace alone, through faith alone, for Christ’s sake is the central truth of our confession.  Forgiving those who do us wrong is the central feature of our lives.  Doctrine and life are bound together.  This is why we pray, “Forgive us our trespasses as we forgive those who trespass against us.”