The First Sunday in Advent

Now when they drew near to Jerusalem, and came to Bethphage, at the Mount of Olives, then Jesus sent two disciples, saying to them “Go into the village opposite you, and immediately you will find a donkey tied, and a colt with her. Loose them and bring them to Me.  And if anyone says anything to you, you shall say, `The Lord has need of them,’ and immediately he will send them.”  All this was done that it might be fulfilled which was spoken by the prophet, saying: “Tell the daughter of Zion, `Behold, your King is coming to you, lowly, and sitting on a donkey, a colt, the foal of a donkey.'”  So the disciples went and did as Jesus commanded them.  They brought the donkey and the colt, laid their clothes on them, and set Him on them.  And a very great multitude spread their garments on the road; others cut down branches from the trees and spread them on the road.  Then the multitudes who went before and those who followed cried out, saying: “Hosanna to the Son of David! `Blessed is He who comes in the name of the Lord!’ Hosanna in the highest!”  Matthew 21:1-9

During Advent we prepare to celebrate the coming of our King.  His coming was promised by the prophets.  As Jesus prepared his royal entrance into the holy city, he cited the words of the prophet Zechariah who wrote: 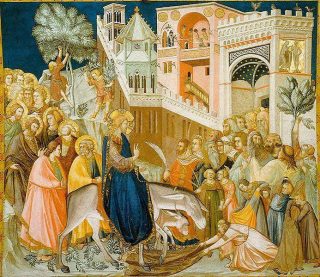 Rejoice greatly, O daughter of Zion!
Shout, O daughter of Jerusalem!
Behold, your King is coming to you;
He is just and having salvation,
Lowly and riding on a donkey,
A colt, the foal of a donkey.  Zechariah 9:9

Christ’s first advent was in lowliness.  He did not enter Jerusalem riding on a war horse accompanied by soldiers.  He rode a donkey, a colt, the foal of a donkey.  He came in humility.  He, who fills the whole universe, who, by his almighty word, keeps all of creation from dissolving into nothingness, hid his almighty power.  He covered up his divine glory.  He came to us in humility.  This was the only way we could have met him without being destroyed by him.

Christ’s second advent will be different.  His first coming was in humility: to serve, to obey, to suffer, and to die.  He hid his glory under deep humility.  He hid his power under weakness.  He came to take away our sins, to save us from hell, and to win our hearts.  But his second advent will be in glory.  We confess in the Nicene Creed, “He will come again with glory to judge both the living and the dead.”  He will strike terror in the hearts of everyone who did not meet him in his first advent.

There are not two Christs: a poor and humble Christ, and an almighty and glorious Christ.  He is the same Christ, the same King.  He came in his first advent to save the world.  He will come in his second advent to judge the world.  Now is the time to meet him.  We must meet him, know him, and trust in him before he comes to judge, because when he comes to judge it will be too late.  If you don’t know him in his first advent, you will face his anger and punishment at his second advent.  Now is the time of grace.  Now is the time to meet Jesus, the King.

When the Bible speaks of the “daughter of Zion,” or the “daughter of Jerusalem,” it is talking about the holy Christian Church.  Jerusalem was built on Mt. Zion, which is why the words are used interchangeably.  The Old Testament Church was centered in Jerusalem because that was where the temple was.  The temple signified Christ.  The promised King of Israel would establish his kingdom from Zion.  The temple was where God met his people.  It was where God’s grace was located.  The blood sprinkled in the most holy place in the temple year after year pointed forward to the blood the promised King would shed on the cross.  This blood would wash away the sin of the world.  When Jesus entered into Jerusalem as her King, he came to suffer and die.  For thirty three years he had lived a life of humble obedience to God.  He obeyed his Father all the way to the death of the cross.  On Calvary, as he bore in his body the sin of the whole world, he gained his kingdom.

His kingdom comes from Zion, outside of whose walls he was crucified and reconciled this whole world to God.  Now Zion extends to the ends of the earth.  She is the holy Christian Church, the Communion of Saints.  She is the kingdom of grace.  She isn’t confined to any specific location.  Christ’s kingdom is where his gospel sounds forth in its truth and purity and where his sacraments are administered according to the gospel.

He comes to you.  You don’t find your way to him.  He finds his way to you.  He comes to his church.  His church is where his gospel is proclaimed, sung, prayed, confessed, and received in the sacraments.  Where the body is, there the head must also be.  He promised, “Where two or three are gathered together in my name, there am I in the midst of them.” (Matthew 18:20)  Jesus comes wherever his word is preached and his sacraments are administered.  He promises to be where his church is gathered.  He binds himself to the Bible, to the preaching of the Bible, to holy baptism, to his holy Supper, to the absolution, to his word in whatever form it comes.

“Tell the daughter of Zion, `Behold, your King is coming to you, lowly, and sitting on a donkey, a colt, the foal of a donkey.'”

Your king comes to you.  You come to church.  You’re here because you came.  Good for you!  You should be here every Sunday morning!  But let me ask you: Did you bring Jesus into this church?  Did you summon him from on high?  Did you command him to be present and that’s why he is present?  Was he almost willing to come here, but needed a bit of coaxing, a bit of persuading, some good old fashioned religious sincerity to convince him to come to us here where we are gathered in his name?

What does the Bible say?  “Behold, your King is coming to you.”  What did you do to get him to come?  Nothing!  What could you do to get him to come to you?  Nothing!  Some say we become Christians by our own free will when we make Jesus our Lord and Savior by inviting him into our hearts.  Is that so?  Do we have a free will in spiritual matters?  Let me ask you.  Can you choose to become six inches taller than you are?  Can you choose to make your brown eyes blue?  If you cannot choose to change your bodily characteristics, what makes you think you can choose your own spiritual condition?  The fact is you cannot.  The Bible says that we are all born dead in sin and without any spiritual power, that we are by nature spiritually blind and hostile to God.  By nature, we have no spiritual ability at all.  By nature, we are not spiritually free, but spiritually bound, bound to the power of the evil one.

You need not toil nor languish

Nor ponder day and night

How in the midst of anguish

He comes, He comes, all willing,

Moved by His love alone,

Your woes and sorrows stilling;

Why such a humble demeanor?  Why such a gentle approach?  Why ride a donkey, a beast of burden?  He comes to you in humility for two reasons.  First, he humbles himself to become obedient and suffer.  Obedience requires humility.  Pride is why people don’t obey legitimate human authority.  “I don’t need that.  I’m better than that.  I can make my own rules.”  Jesus, who is King of kings and Lord of lords, submitted to authority.  He obeyed his Father’s eternal law and he submitted as well to every human ordinance, including paying taxes to support a corrupt and godless government.  He obeyed.  His obedience was vicarious.  He did it for you.  He didn’t do it for himself.  He took your place under the law and humbly fulfilled God’s law perfectly in your stead.  This is the first reason for his humble advent.  He came in humility to obey and to suffer for you.

The second reason he comes in humility is so that we can know him and trust in him.  If he didn’t cover up his divine glory, we would not be able to face him, much less embrace him by faith.  He comes to us in a way that wins us.  He doesn’t scare the hell out of us.  He destroys the power of hell over us.  He enters into our hearts to rule over us by his grace.  Until he came to us, until the Holy Spirit brought Christ to us, replacing our stony hearts with trusting hearts, we were spiritually blind and hostile to God.  The Holy Spirit, through the gospel, by God’s grace alone, overcame our unbelief.  We could not meet him until he came to us.

This is something we Bible-believing, traditional Christians must take to heart!  We look at a godless culture falling deeper and deeper into a cesspool of vice.  We see Christians persecuted by officious bullies that want to force us to bow down before false gods of political correctness.  We ask: When will God address this evil?  When will God vindicate his word?  When will he judge the enemies of Zion, these despoilers of Jerusalem?  Does not Christ vindicate his church?  Then vindicate her!

Wait, Christian wait.  Christ’s victory was on Calvary.  We defeat our spiritual enemies by bringing the gospel of peace to those who persecute us.  We cry out to our Lord Jesus, “Hosanna!  Save us!”  Not just us, but save those who are bound by lies and driven by malice to do evil against Christ and his church.

Christ will return and he will judge.  Have no doubt about that.  Only those who meet Jesus in his humility will be able to face him in his glory.  We welcome him as the One who died for everyone, even those presently persecuting his church.  The day of Christ’s return is at hand.  Now is the time to invite friends, neighbors, family, loved ones, coworkers, and anyone else willing to hear us to come here to church and meet Jesus.

We don’t draw him here by our power or piety.  He comes of his own free will.  His will is to take the burden of sin off of our hearts and souls.  He is gentle and kind.  O, Lord, how shall I meet you?  I will listen to your word, believe your promise to me, trust in your forgiveness, sing praises to your name, and give to my neighbor the love you have given me.