The Seventeenth Sunday after Trinity

Now it happened, as He went into the house of one of the rulers of the Pharisees to eat bread on the Sabbath, that they watched Him closely.  And behold, there was a certain man before Him who had dropsy.  And Jesus, answering, spoke to the lawyers and Pharisees, saying, “Is it lawful to heal on the Sabbath?”  But they kept silent. And He took him and healed him, and let him go.  Then He answered them, saying, “Which of you, having a donkey or an ox that has fallen into a pit, will not immediately pull him out on the Sabbath day?”  And they could not answer Him regarding these things.  So He told a parable to those who were invited, when He noted how they chose the best places, saying to them: “When you are invited by anyone to a wedding feast, do not sit down in the best place, lest one more honorable than you be invited by him; and he who invited you and him come and say to you, ‘Give place to this man,’ and then you begin with shame to take the lowest place.  But when you are invited, go and sit down in the lowest place, so that when he who invited you comes he may say to you, ‘Friend, go up higher.’ Then you will have glory in the presence of those who sit at the table with you.  For whoever exalts himself will be humbled, and he who humbles himself will be exalted.”  Luke 14:1-11

There is one body and one Spirit, just as you were called in one hope of your calling; one Lord, one faith, one baptism; one God and Father of all. (Ephesians 4:4-6a)

Christ and his church are united by an unbreakable bond.  The life that Christ lived among us is the life we live in the world.  He was constantly under critical scrutiny by the religious establishment.  They watched him.  As St. Luke records:

Now it happened, as He went into the house of one of the rulers of the Pharisees to eat bread on the Sabbath, that they watched Him closely. 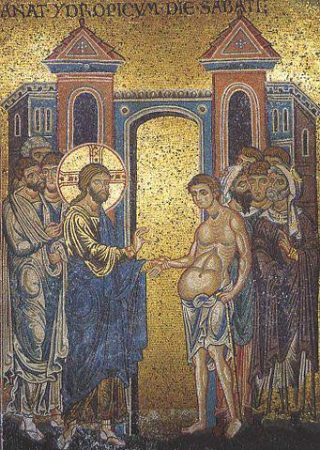 They were seeking to find fault.  Also today, they seek to find fault with Christ’s church – and for the same reasons.  The Pharisees judged Jesus.  They judged him by the law.  But they judged falsely because they did not understand the law.  One cannot understand the law by knowing what the rules are.  The rules are at best interpretations of the law and applications of those interpretations.  They may be sound or unsound, sensible or silly, but whatever they are, they are not the law.

Yet to this day religious people think that religion is all about obeying the right rules.  First you have to have the right ones.  Then you have to follow them.  The Pharisees used the law to find fault with others – even with Jesus, the sinless Son of God!  Since the Sabbath law did not permit working on Saturday, and since healing someone is work, they concluded that it would be a sin if Jesus healed a man on Saturday.  But it was Saturday, and Jesus saw a man in need of healing.  For Jesus, it was obvious what he should do.  Jesus did not think in terms of rules.  He thought in terms of love.  The commandments teach love.  You do what love does.  Jesus healed the man.

Jesus turns the judgment of the Pharisees against them by pointing out that they would be quick to pull their donkey or ox out of a pit on the Sabbath.  After all, their livelihood depended on having healthy animals!  They would interpret the law to help themselves.  But they would use the same law to judge their neighbor.  Thus we see both Jesus and his church attacked in the same way.  The attack is the attack of legalism against the gospel.  It never changes.  The Pharisaical assault against Jesus in the first century is going on right now against his church in the twenty first century.  Legalists hate the gospel.  They attack the gospel by turning the Sabbath into a burden, instead of a source of rest and peace.  Their modus operandi never changes.  God gives a gift that brings freedom and they twist it into a chore that imposes slavery.

Legalism is the religion of people who want to justify themselves.  Give us rules to obey so that by obeying them we will meet whatever obligations are required of us to get whatever it is that God gives as a reward for obedience.  Thus, the law is a means to an end, and we are in charge of it.  Religion is a way of working the system.

When you boil down this popular religion to its essence you find the exaltation of sinful pride.  What does love do?  It humbles itself before others.  What does pride do?  It exalts itself before others.  There is a direct theological link between the two events described in our Gospel Lesson for today.  The judgmental attitude of the Pharisees toward Jesus and the public posturing of the guests invited to the dinner came from the same place: sinful, self-centered, self-exalting pride.  Religion is all about me and my status.

But such an attitude finds no Sabbath rest on any day of the week.  You cannot exalt yourself before God.  If you want to use religion to make yourself better you will become the slave of a false religion.  They’re all the same.  The orthodox Jew who faithfully observes all of the requirements of his religion; the practicing Muslim who dutifully prays facing Mecca, strictly observing the rules of fasting, dress, and diet; yes, and the Christian who attends church faithfully, follows the liturgy, sings the hymns, says the creed and the prayers.  If they rely on their obedience to the rules of their religion they are all equally lost, equally blind, and equally estranged from God.  And they have no rest or peace.

To keep the Sabbath law is to find one’s rest in Jesus.  Jesus said, “Come to me, all you who labor and are heavy laden, and I will give you rest.” (Matthew 11:28)  To rest the body and ignore the needs of the soul is to break the Sabbath.  In the Catechism, the true spirit of the Sabbath law is set forth.

Remember the Sabbath day, to keep it holy.  What does this mean?  We should fear and love God that we may not despise preaching and His Word, but hold it sacred and gladly hear and learn it.

Notice that the Catechism doesn’t mention any specific day of the week.  The Sabbath law that God gave to Moses on Mt. Sinai was, as written, written for the nation of Israel.  As you know, the Ten Commandments – indeed, the entire Law of Moses – contained not only God’s eternal and immutable moral law, but also regulations that applied only to God’s Old Testament church and not to the New Testament church.  The prohibition of working on Saturday does not apply to us Christians.  St. Paul writes in his Epistle to the Colossians:

So let no one judge you in food or in drink, or regarding a festival or a new moon or sabbaths, which are a shadow of things to come, but the substance is of Christ. (Colossians 2:16-17)

The substance is Christ, Paul says.  Christ is our Sabbath rest.  Thus, to keep the Sabbath is to receive from Christ what Christ has purchased for us by his obedience and his death.

That’s what going to church and remembering the Sabbath is all about.  It is not about obeying religious rules that the church sets down for you to obey so that by obeying these rules you elevate yourself into a higher religious status.  This is the very opposite of what it means to honor the Sabbath.  Since Christ has fulfilled the Sabbath law for us, we go to church to find Christ.  We go to church to receive what Christ alone has to give.  As a matter of fact, the very definition of the word “church” is not a building or a place but rather a people, a people who are justified by God through faith alone.  Through faith in what?  Through faith in what Jesus Christ gives his church, his believers, in the gospel and the sacraments.  So then, the church gathers together on a Sunday morning to receive Christ.  This brings her peace and rest.

No one can give you spiritual peace, but Jesus.  Why is that?  Because only Jesus has borne your spiritual burden.  Only Jesus has fulfilled your spiritual duties.  Consider the man who suffered from dropsy.  Jesus was not just showing compassion to a man who was suffering.  He was.  The man was suffering.  Dropsy was a disease in which the victim retained bodily fluids and suffered terrible pain and disfigurement. It was a miserable condition.  Jesus removed his misery.

But it was not just for that man’s benefit that Jesus did it.  Jesus was living the life of compassion, love, and mercy that God’s law requires of us all.  Every time you see Jesus doing acts of kindness, consider that he is living that life of loving obedience that God requires of us.  We haven’t lived it.  That’s what the Bible calls sin.  This is why our conscience is afraid.  This is why we come up with ways to calm our conscience: inventing rules we can obey to replace the law we disobeyed, making excuses, blaming others, denying the sin is sin, or just getting angry and changing the subject when our sins are brought to our attention.  None of this brings us any peace.

Christ does.  Where we stood on our pride and demanded recognition, he humbled himself and became obedient all the way to the death of the cross.  Where we stood in judgment of others to make ourselves look better in comparison, Jesus willingly bore the judgment of God against all sinners and thereby removed that judgment from us.

We go to church to find our true Sabbath rest in Christ who gives us this forgiveness, this peace, this reconciliation with God that he has won for us all.  Every time we come to church Jesus invites us to lay our burdens on him.  What sins hurt your conscience?  What personal failures bring you down and bind your soul?  What doubts flit through your mind and challenge your faith?  Bring these sins, these personal failures, these doubts to church each Sunday and lay them on Jesus.  Humble yourself before him and receive from him the peace of God that passes all understanding.  Find in Jesus your true Sabbath rest.

In Jesus I find rest and peace –

The world is full of sorrow;

His wounds are my abiding place;

Bring what it may,

There I can stay,

My faith finds all I need today,

I will not trouble borrow.