The Twelfth Sunday after Trinity

“God’s Word and our Confession”

Again, departing from the region of Tyre and Sidon, He came through the midst of the region of Decapolis to the Sea of Galilee.  Then they brought to Him one who was deaf and had an impediment in his speech, and they begged Him to put His hand on Him.  And He took him aside from the multitude, and put His fingers in his ears, and He spat and touched his tongue.  Then, looking up to heaven, He sighed, and said to him, “Ephphatha,” that is, “Be opened.” Immediately his ears were opened, and the impediment of his tongue was loosed, and he spoke plainly.  Then He commanded them that they should tell no one; but the more He commanded them, the more widely they proclaimed it.  And they were astonished beyond measure, saying, “He has done all things well. He makes both the deaf to hear and the mute to speak.”  Mark 7:31-37 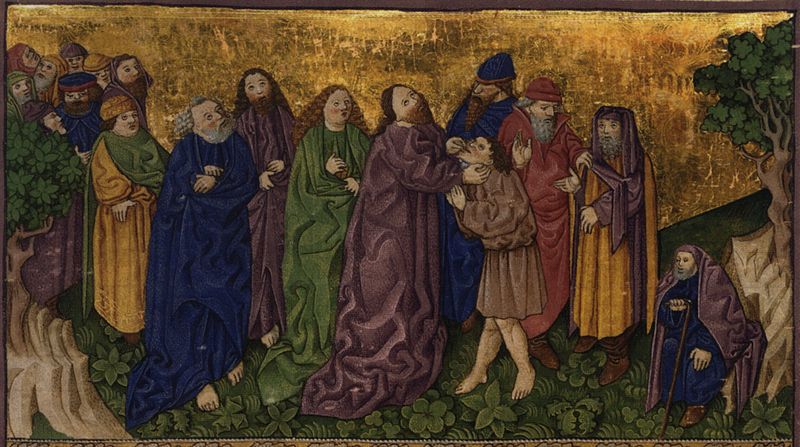 The signs signify who Jesus is.  “He has done all things well.”  Who has done all things well?  Moses writes in Genesis 1, 21, “Then God saw everything that He had made, and indeed it was very good.”  The God whose creation was good became a man.  He assumed human flesh and blood, taking upon himself a created body and in that body he did all things well.  God becomes man to do as a man the things that God alone can do.  This is how he redeems mankind and raises us up to heaven.  The signs we consider today signify Christ’s true and essential deity, for only God can make the deaf to hear and the mute to speak.

Then he spoke.  Putting his fingers in the man’s ears did not give him his hearing.  Touching the man’s tongue did not give him his speech.  Looking up into heaven did not give Jesus the power to do what he did.  Jesus, the eternal Word who was with God in the beginning, by whose word all things were made, spoke.  He said: “Ephphatha!”  Be opened.  He spoke and it was done.  He who was deaf could hear clearly.  He who was mute could speak plainly.  It was a miracle.  It was a sign.  The sign signified not only who Jesus was and what Jesus could do.  It signified how God wants to deal with us.  God wants to deal with us through his word.

Without God’s word no one can know God.  That’s not to say that people don’t know something about God from nature.  From the natural world we know that there is a creator.  How else could this world get here?  How else could order prevail in the natural world?  The creation points to its creator.  From our consciences we know that there is a lawgiver.  There could be no right or wrong if there were no God.  There is no true morality without God.  When the natural knowledge of God’s law is suppressed all hell breaks loose on earth.  Our consciences point to the existence of a God of justice who rewards the good and punishes the bad.

But the knowledge of God that we have from nature and from conscience is not enough for us to know God as he is.  To know God personally requires God to reveal himself to us.  He reveals himself to us by what he says to us.  Until he does, we cannot hear him and we cannot address him.

Imagine living that life your whole life even in your own country where you were born.  Then you can understand a bit what being deaf and mute is like.  The inability to hear and the inability to speak go together.  You learn how to speak by listening to yourself.  In recent years great advances have been made in teaching deaf people how to speak clearly, but it is a long and difficult task.  What is amazing about Christ’s miracle is that the deaf man could speak clearly immediately.  Jesus not only gave him the ability to hear.  He gave him a skill that is acquired over a long period of time and he did so instantaneously.

The devil stops up our ears.  He binds our tongues.  But, unlike the deaf mute that Jesus miraculously healed, we don’t know it.  That’s the universal human condition.  People are deaf but they think they can hear.  People are mute but they think they can speak.  They don’t understand a word God says and they don’t know what they are talking about either.  Such is our native spiritual condition.  St. Paul writes:

But the natural man does not receive the things of the Spirit of God, for they are foolishness to him; nor can he know them, because they are spiritually discerned. (1 Corinthians 2:14)

This is why most people remain spiritually blind and deaf.  They don’t know that their own notions about spirituality are contrary to God’s notions.  This is a bitter truth that we must confront or we will be swept away into the conceit that parades as true spirituality.  Here is what we confessional Lutherans confess about our native spiritual abilities in the Formula of Concord:

That original sin in human nature is not only a total lack of good in spiritual, divine things, but that at the same time it replaces the lost image of God in man with a deep, wicked, abominable, bottomless, inscrutable, and inexpressible corruption of the entire nature in all its powers, especially of the highest and foremost powers of the soul in mind, heart, and will.  (Formula of Concord, Solid Declaration, Article I, paragraph 11)

For Jews request a sign, and Greeks seek after wisdom; but we preach Christ crucified, to the Jews a stumbling block and to the Greeks foolishness, but to those who are called, both Jews and Greeks, Christ the power of God and the wisdom of God.  Because the foolishness of God is wiser than men, and the weakness of God is stronger than men. (1 Corinthians 1:22-25)

Jesus sighed.  Then he spoke.  He sighed as one doing battle.  For that’s what’s going on here.  God is doing battle for his people.  He sees them caught in a power they cannot overcome and he comes to deliver them from it.  As little as a deaf man can choose to hear, so little can an unbeliever make himself into a believer.  As little as a mute man can speak clearly, so little can an unbeliever confess the truth.  Only God can bring us to faith.  Only God can enable us to make the good confession.  And he does so through his word.

Ephphatha!  Be opened!  And what happened?  He could hear.  He could speak.  The crowd witnessed it.  Jesus told them not to tell anyone, but they went ahead and preached it anyway.  But Jesus would not send out his preachers to preach until he had finished the work he came to do.  The word that delivered the deaf mute was a word of war against the devil and all the powers of hell.  The fiercest battle in that war was fought on the cross where Jesus bore in his body the sin of the world and took away sin’s curse.  There, in Christ’s crucifixion, is perfect healing for our bodies and souls.  Christ’s death destroyed our death.  His resurrection from the dead is our absolution and guarantee of eternal life.  The declaration of forgiveness that we hear, believe, and confess as God’s truth comes to us from the crucified and risen Lord Jesus.  In him we have victory over the devil and freedom from his power.  That victory comes only through Jesus’ word.

God’s word opens our ears to hear and our tongues to confess.  We believe what God teaches us in the Bible and we confess it.  The Bible is God’s word.  It is perfectly true.  It contains no errors.  It is powerful.  It does what it says.  It gives what it promises.  The grace it describes is the grace it gives.  Its power is the power to enlighten us to the truth by which we are forgiven of our sins and rescued from the power of evil.

We are entering into the political season where politicians vie for the support of the American voters.  They want you to listen to them.  They want you to support their policies.  Wouldn’t it be nice if we could go through a campaign season where every politician seeking power spoke only the truth?  Where when one candidate argued his case against another he would always do so by telling the truth, the whole truth, and nothing but the truth?  But among the rulers of this world the lie is often seen as more effective than the truth.  So it has always been and so it will be until the end of time.

So much communication and so little truth!  Television, radio, internet, conversations at work, at school, around the dinner table – what is said that is so important?  Who is doing what to whom?  A drought, a fire, a war, a celebrity outrage, a political promise, a sports event – the list goes on, and in the end it all fades away into nothingness.  As the preacher said, “Vanity, vanity, all is vanity.”

But our God’s word stands forever!  It’s not the empty and passing knowledge of overpaid talking heads on television.  It’s the living word of the living God.  He who speaks it is he who purchased its power.  He sighed and opened the man’s ears and tongue.  He sighed and picked up his cross.  There, as he suffered for us, he validated all of the words of promise God had ever spoken to his people.  He faced all the evil they suffer.  He suffered all the guilt of the sin they committed.  He took it upon himself, and removed it from them forever.  He who opened the deaf mute’s ears and tongue opened heaven to us by winning forgiveness for us.  He gives us this forgiveness in his word and nowhere else.  This is why we hear it and confess it.