The Fifteenth Sunday after Trinity

“No one can serve two masters; for either he will hate the one and love the other, or else he will be loyal to the one and despise the other. You cannot serve God and mammon. Therefore I say to you, do not worry about your life, what you will eat or what you will drink; nor about your body, what you will put on. Is not life more than food and the body more than clothing? Look at the birds of the air, for they neither sow nor reap nor gather into barns; yet your heavenly Father feeds them. Are you not of more value than they? Which of you by worrying can add one cubit to his stature? So why do you worry about clothing? Consider the lilies of the field, how they grow: they neither toil nor spin; and yet I say to you that even Solomon in all his glory was not arrayed like one of these. Now if God so clothes the grass of the field, which today is, and tomorrow is thrown into the oven, will He not much more clothe you, O you of little faith? Therefore do not worry, saying, ‘What shall we eat?’ or ‘What shall we drink?’ or ‘What shall we wear?’ For after all these things the Gentiles seek. For your heavenly Father knows that you need all these things. But seek first the kingdom of God and His righteousness, and all these things shall be added to you. Therefore do not worry about tomorrow, for tomorrow will worry about its own things. Sufficient for the day is its own trouble.” Matthew 6:24-34 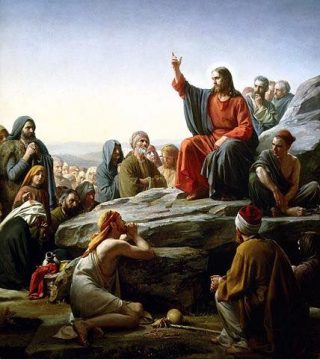 The value of a commodity is determined by supply and demand.  If there is much of it and few people want it, it won’t be valued very highly.  On the other hand, if there is little of it and many people want it, its price will be high.  The wants of the people and the supply of what they want determine the value of land, houses, cars, food, education, hamburgers, and tacos.

People want good food.  They want nice clothes.  Their wants put a value on these things.  It makes sense that people will value necessities of life.  After all, you must eat to live.  You need clothes.  Before you know it, the mild weather will be gone and we’ll have to bundle up to go outside.  Food and clothing are a constant need.  No wonder people worry about them!

Jesus tells us not to.  He makes a simple but compelling argument.  Our Father in heaven knows that we need food and clothing.  Since he knows we need these things, we shouldn’t worry about getting them.  After all, if he feeds the birds, won’t he feed us?  We are more valuable than birds.  That’s what God says.  We’re the most valuable thing God created.  We didn’t arise from the slime, evolving over millions of years from some microscopic single-celled organism into a human being.  God created us in his own image.  He created us male and female.  He created us body and soul.  He treasures us so much that he chose to become one of us.

To be made in God’s image means that God made us to know him and to love him.  To know God isn’t just to know that he exists.  When we are on vacation up on Gunflint Lake on the border of northeastern Minnesota and northwestern Ontario, we often go for walks in the woods.  We see evidence of bears, sometimes martins, or even wolves.  I have never developed a friendship or personal relationship with a bear, a martin, or a wolf.  That’s the stuff of fairy-tails.  Animals can’t talk.  They are not persons.  People may humanize their dogs and cats, but that doesn’t make them into persons.  They’re animals.  We’re not.  We’re human beings.  We can know God.  They can’t.  God feeds the birds, but the birds don’t know it.  God cares for your dog and cat, but neither Spot nor Puff are capable of knowing God, loving God, or worshipping God.  They take from God what God gives.

But even while the birds and the cats and dogs, the bears, the martins, and the wolves do not know God or love God, they do rely on God, whether they know it or not.  The birds don’t worry about food.  They see the food and they eat it.  Where did the worm or the fish or the rabbit come from?  God put them there for the birds to eat.  God provides.  He feeds the birds.  They don’t make clothes.  They don’t build barns.  They rely on the God they cannot know or love.

We were made by God to know him and to love him.  So what are we doing then, when we worry about whether we will have enough food to eat and decent clothes to wear?  What are we doing when we worry about our future, the market, the bank account, the retirement fund, job security, decent prices, a decent salary, or any other thing?  We are worshipping a false god.  That’s what we are doing.

Materialism and atheism go together.  Atheists living in small town and rural Montana or North Dakota don’t usually advertise themselves.  It’s not socially acceptable to deny the existence of God.  There are places where atheism is quite respectable.  But to worry about whether you are going to have the necessities of life when God has promised to provide them for you is to believe like an atheist.  To worry about whether God will take care of you is to deny God.  It’s to think as if he doesn’t really exist, or if he does, he doesn’t care about us.  Do any of us really think that we know better than God what we need?  Do we really think that we are more capable than God of taking care of ourselves?  To trust in stuff – even the necessities of life – is to not trust in God.  You cannot love and you cannot serve both God and your material possessions.

The love of our material possessions is the source of no end of trouble.  St. Paul writes in 1 Timothy 6,

Now godliness with contentment is great gain.  For we brought nothing into this world, and it is certain we can carry nothing out.  And having food and clothing, with these we shall be content.  But those who desire to be rich fall into temptation and a snare, and into many foolish and harmful lusts which drown men in destruction and perdition.  For the love of money is a root of all kinds of evil, for which some have strayed from the faith in their greediness, and pierced themselves through with many sorrows.

The love of money is idolatry.  We should be content with food and clothing.  Worry isn’t just a lack of faith in the God who will provide.  It is serving money.  Get more and more and more.  Then you won’t have to depend on God.  The reason Western Civilization is falling is because when God made the Europeans and Americans rich, they began to worship all their stuff instead of the God who gave it to them.  The God and Father of our Lord Jesus Christ is ignored.  What used to be known as Christendom has fallen from the faith, worshipping the creation rather than the Creator.

If you want to know why churches are shrinking all over America, it’s not so hard to understand.  More and more Americans – especially younger Americans – no longer believe in the God who created them in his image.  They no longer consider God as their Father.  Their notion of God has morphed into something alien and strange.  When he isn’t their Creator he isn’t their judge.  When he isn’t their judge, his law can be ignored.  So people make up their own gods, make up their own laws, and worship what they have made in their own image.  They project on their manmade deities their own ideas, and the number one idea of all humanly crafted religions is that we are good.  The denial of our sin means that there is no such thing as idolatry.  It means that we need not seek God or his rule over us, but that we are, for all practical purposes, our own gods.

To which Jesus replies, “Seek first the kingdom of God and his righteousness.”  You must know God.  You must love him.  Until you know him and love him you are steeped in idolatry.  You worry about stuff you don’t have.  You worry about stuff you do have.  You have no peace, no true joy, and no knowledge of love until you know God as God reveals himself to you.  Where is that?  In his kingdom.

The kingdom of God isn’t a place.  It’s Christ ruling over you as King of kings and Lord of lords.  His rule over you is through his Word.  He speaks in the Bible, the book written about him.  He speaks in church through his ministers he sends to preach his word that is written down in the Bible.  By speaking to us he governs us.

But Jesus does more than talk.  He acts.  He establishes his kingdom by dying on the cross.  There we see the righteousness of the kingdom.  Now only a sinner who knows he’s a sinner and wants to be good but knows he’s not is going to care about the righteousness of God’s kingdom.  Jesus says this is the first thing we should seek!  The very first.  When you find yourself, a guilty sinner, an idolatrous, self-centered, and doubting sinner, standing in the nakedness of your guilt before God and your divine Judge does not judge you, but turns his eyes away from your shame and looks to his Son’s obedience and sacrifice, and clothes you in that righteousness, then you have found what is truly valuable in life.

The kingdom of God and his righteousness are more valuable than food, clothing, money, property, education, health, influence, or the cabin on the lake.  With Christ and his righteousness comes the Holy Spirit.  He persuades our doubting hearts of the faithfulness of our Father in heaven.  Surely if God gives us his only Son and justifies us freely by his grace in Christ, he will give us everything our bodies need.  The Holy Spirit persuades us of this.  He shows us the true treasure of having the forgiveness of sins, peace with God, and the guarantee of eternal life.  From knowing God in Christ, and knowing how much he loves us, we actually know him.  Not just stuff about him.  We know him as he really is.  And we love him.  In God’s kingdom his image is restored in us.