The Tenth Sunday after Trinity

“What Makes for Peace”

Now as He drew near, He saw the city and wept over it, saying, “If you had known, even you, especially in this your day, the things that make for your peace! But now they are hidden from your eyes.  For days will come upon you when your enemies will build an embankment around you, surround you and close you in on every side, and level you, and your children within you, to the ground; and they will not leave in you one stone upon another, because you did not know the time of your visitation.”  Then He went into the temple and began to drive out those who bought and sold in it, saying to them, “It is written, ‘My house is a house of prayer,’ but you have made it a ‘den of thieves.'”  And He was teaching daily in the temple. But the chief priests, the scribes, and the leaders of the people sought to destroy Him, and were unable to do anything; for all the people were very attentive to hear Him.  Luke 19:41-48 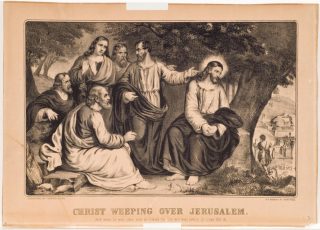 Jesus cried over Jerusalem.  God is not a man that he should laugh or cry.  We must not ascribe human emotions to God as if he is governed as we are by capricious feelings.  God is unchanging.  But God become a man.  He who was eternally begotten of the Father became flesh and blood in the womb of the Virgin Mary.  He was made man.  As the God-incarnate looked down upon his holy city he cried.  He cried because he loved her.  He saw what was coming.  Jerusalem would be destroyed.  It would happen in about forty years.  It would be devastating.  Expectant mothers would be brutally slaughtered along with their unborn babies.  Hundreds of thousands of people would be killed.  Jerusalem would be leveled.  The temple would be utterly destroyed.  The Jews would be sold as slaves.  A more thorough humiliation could not be imagined.  It was Jesus who said, “Whoever exalts himself shall be abased.”  He was not engaged in idle talk.  He was speaking God’s word.

When we think of Jerusalem we think of the capital city of the ancient kingdom of Israel.  After the kingdom was divided, it was the capital city of the ancient nation of Judah which, under Roman rule, became Judea.  Jerusalem was a nation’s capital city.  But more than that, Jerusalem was the center of the Old Testament Church.  The temple was where God met his people.  The temple signified peace because it was where the sacrificial blood was shed in the most holy place of the temple that God’s anger against sinners was removed.  Animal blood couldn’t take away sin.  God accepted those sacrifices for the sake of the Christ’s sacrifice offered for the sin of the world.  The temple obtained its dignity and holiness from him whose body would be the temple.  Jesus’ body is the temple, as we read in Hebrews 10:5,

Therefore, when he came into the world he said: “Sacrifice and offering you did not desire, but a body you have prepared for me.”

Christ’s body is the temple because it is where God meets his people.  Jesus prophesied, “Destroy this temple, and in three days I will raise it up.” (John 2:19)  God visited his people in the person of his Son.  God came to his holy city.  The leaders of the church rejected him whose coming their own prophets had foretold.  They rejected him who was the true temple.  They rejected the peace that was Jerusalem’s birthright.  And in rejecting Jesus they brought judgment upon themselves.

Properly speaking, the church is the assembly of saints who are justified by God through faith alone in Christ the Redeemer.  We call this church “invisible” because we belong to her through faith alone and faith is invisible.  When we speak of God judging the church, we aren’t talking about God judging the true invisible church.  She is the apple of his eye.  She will never be judged.  She is sheltered by the wings of mercy in Christ and cannot be found guilty of any sin at all.  She is robed in the righteousness of Jesus and is adorned as a spotless bride before him.  God does not judge her.  God delivers her from judgment through the merits and mediation of Jesus.

But the visible church God will judge.  If he judged Jerusalem and punished her through the agency of a pagan ruler, how can the visible church of today survive if she also rejects the word of God?  There is an arrogance among religious people that comes from their sinful pride.  Pride worms its way into our hearts and takes over.  It distorts God’s grace.  God chooses his people graciously, without any regard for their good deeds or worthiness.  He chooses them for Christ’s sake – whether his church of the Old Testament or the New Testament – it is always for Christ’s sake that he chooses her.  He gives her a status and a dignity.  He regards her as precious and holy.

Listen, Christian, whoever you may be: your holiness, your dignity, your status – these are all gifts from God.  You never deserve them.  They aren’t yours because you are you; they are yours because God is gracious to you for Christ’s sake.  If you were to get what you deserve you would be on the outside looking in.  The God who sent the Roman general Titus to besiege Jerusalem in 70 A.D. and utterly destroy her is the God who continually cleanses his temple of those who would profane it.

When the unmerited love of God – the forgiveness of sins purchased by the blood of Jesus – is scorned, there is always a cheap imitation to take its place.  It often takes the religious form of the worship of money.  The more things change the more they stay the same.  Jesus threw the money changers out of the temple.  And he does so today.  There have always been those who twist the faith into a means of making money.  It’s not just the T.V. hucksters who sell their prosperity gospel.  It’s the more respectable church goers who carefully modify the sharp claims of Christianity to fit into social expectations so as not to offend important people.  Those who distort the true faith to enrich themselves or to secure social status need to remember the destruction of Jerusalem and what it means.

It does not mean that God does not love the Jews.  Jesus wept for his people.  Jesus was a Jew.  The first Christians were Jews.  God destroyed Jerusalem because of their unbelief.  They bore God’s name and lived in God’s city and claimed the status of God’s children.  But they rejected God’s word.  They rejected the written word of the Holy Scriptures.  As Jesus said to them,

You search the Scriptures, for in them you think you have eternal life; and these are they which testify of Me But you are not willing to come to Me that you may have life. John 5:39-40.

Jesus cried over Jerusalem.  But he did not spare her.  He died for her.  But his death saves no one who rejects the grace that flows from his wounds.  Grace isn’t a medicine like penicillin that cures what ails you regardless of what you believe.  Listen to Jesus:

If you had known, even you, especially in this your day, the things that make for your peace! . . . you did not know the time of your visitation.

God saves no one apart from faith in Christ.  Faith in Christ comes from God’s word.  As St. Paul writes, “Faith comes by hearing and hearing by the word of God.”  Our Gospel for today concludes:

And He was teaching daily in the temple. But the chief priests, the scribes, and the leaders of the people sought to destroy Him, and were unable to do anything; for all the people were very attentive to hear Him.

If Jerusalem was destroyed, so will be the visible church of today that discards the mysteries of God for politics, money, or social standing.  The destruction of Jerusalem is a sign of the destruction of the whole world on the day of Christ’s second coming.  Who will survive that day?  Those who were attentive to hear Christ’s word.  The church is the ark of salvation.  It is the apple of God’s eye.  It is the bride of Christ.  It is the heavenly Jerusalem.  But she is invisible to the eye and her glory is hidden from this world.  We see her beauty and dignity only through faith in him who purchased her by his blood, whose body is her holy temple, where she meets God and finds peace.

There is peace in this world.  Here in this place where we gather together to confess our sins and plead for God’s mercy, Christ’s gospel is proclaimed and his body and blood are distributed and received.  Here Jesus dwells in his temple.  God visits us and makes peace with us.