Why does Jesus tell us to “Beware of false prophets?” These “ravenous wolves,” regardless of their pious appearance and stated intent, are destructive to souls and enemies of salvation.  [Rev. Kurt Hering] 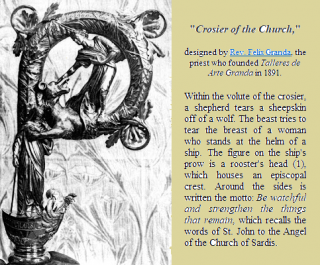 3] 2. And because directly after the times of the apostles, and even while they were still living, false teachers and heretics arose, and symbols, i. e., brief, succinct [categorical] confessions, were composed against them in the early Church, which were regarded as the unanimous, universal Christian faith and confession of the orthodox and true Church, namely, the Apostles’ Creed, the Nicene Creed, and the Athanasian Creed, we pledge ourselves to them, and hereby reject all heresies and dogmas which, contrary to them, have been introduced into the Church of God.

4] 3. As to the schisms in matters of faith, however, which have occurred in our time, we regard as the unanimous consensus and declaration of our Christian faith and confession, especially against the Papacy and its false worship, idolatry, superstition, and against other sects, as the symbol of our time, the First, Unaltered Augsburg Confession, delivered to the Emperor Charles V at Augsburg in the year 1530, in the great Diet, together with its Apology, and the Articles composed at Smalcald in the year 1537, and subscribed at that time by the chief theologians.

5] And because such matters concern also the laity and the salvation of their souls, we also confess the Small and Large Catechisms of Dr. Luther, as they are included in Luther’s works, as the Bible of the laity, wherein everything is comprised which is treated at greater length in Holy Scripture, and is necessary for a Christian man to know for his salvation.

6] To this direction, as above announced, all doctrines are to be conformed, and what is, contrary thereto is to be rejected and condemned, as opposed to the unanimous declaration of our faith.

7] In this way the distinction between the Holy Scriptures of the Old and of the New Testament and all other writings is preserved, and the Holy Scriptures alone remain the only judge, rule, and standard, according to which, as the only test-stone, all dogmas shall and must be discerned and judged, as to whether they are good or evil, right or wrong.

(You may download a letter size pdf file The Eighth Sunday after Trinity Bulletin Insert from this link.)