CLICK this link to listen to audio of this sermon. 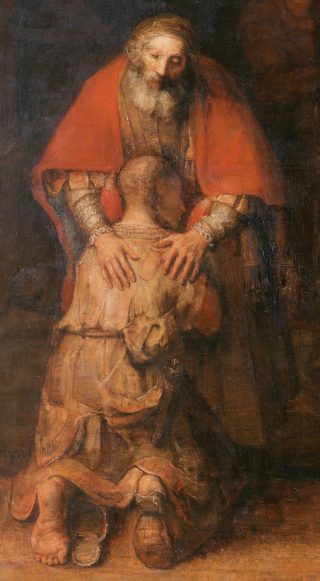 Today is Father’s Day.  It is appropriate that we read and discuss this story Jesus told about a father and his two sons.

Last week it was my privilege to be interviewed on a radio program called Issues, Etc.  The topic was patriarchy.  The word patriarchy means the rule of fathers.  If you have ever run across this word, the chances are that it was used in a negative way.  Patriarchy is supposedly sexist, misogynistic, mean, abusive, and a few other bad things as well.  Those who attack patriarchy claim that only when we are rid of the distinctions between men and women, especially the outdated notion that a father is the head of the home, will we be free from abuse, repression, and inequality.

Now it is true that there are vicious and cruel patriarchies all over the world.  Wherever Islam has been imposed on a people, the women have suffered.  But the Christian teaching about patriarchy is shaped by the gospel.  The gospel of God’s undeserved kindness toward unworthy sinners is beautifully pictured for us in the story of the prodigal son.

The man has two sons.  The first son treats him with disdain.  He demands his inheritance.  Now you don’t get your inheritance until the one from whom you receive it is dead.  That’s the way it works.  So, when the son demands his inheritance it is as if he is telling his father to drop dead.  The young man wants his father’s wealth, but he doesn’t want his father.  And so it is with those who want the blessings God gives, but would rather run away from God than to run to him.  They inevitably abuse the gifts God gives them.

The boy’s wealth did not last long.  He lived to please himself and eventually found himself broke.  The only job he could find was as demeaning a job as there could be: to feed pigs, an unclean animal.  He was so desperate, so hungry, that he would gladly have eaten the pigs’ food.

Then he remembers.  He remembers his father.  This young man is a picture of a Christian who has fallen away from the faith and is on his road back to the faith.  He’s not quite there yet.  He recognizes his sin.  He knows he is to blame for the mess he made of his life and that he doesn’t deserve anything good from his father.  He resolves to confess his sin to his father.  He knows that his father is full of mercy.  That’s why he has the courage to return to him.  He knows his father will provide for his needs.  He rightly figures that his father’s servants are better off than he is, with plenty to eat.  What he doesn’t quite understand, however, is the depth of his father’s love.  He is willing to be a servant.  He will not claim the right of a son.  He is too ashamed to ask for it.

But look at his father’s love!  He sees him coming.  He’s been waiting for him.  He runs out to meet him.  He kisses him.  The son begins to make his confession.  He confesses his sin.  He confesses he is not worthy to be called his son.  But before he can ask to be made a servant – which was all he could have hoped for – his father treats him as a son.  He puts the best robe on him, a ring on his finger, and sandals for his feet, and kills the fattened calf to prepare a feast and throw a party to celebrate his lost son’s return.

This is the Father’s love.  If you are the sinner who has seen his own wretchedness, the depth of his guilt, and his utter unworthiness, this love is the most wonderful thing in the world.  You offended and despised your father.  You dismissed his law and scorned his teaching.  You traded off his love for selfish pleasures.  All you can offer him is your guilt and unworthiness.  What does he do?  He receives you back.  He doesn’t scold you.  He doesn’t put you on trial.  He doesn’t make you prove yourself worthy.  What a wonder!  Who can understand such a love?

The older son didn’t understand it.  He resented it.  He thought it was wrong.  He was angry.  He thought his father was unfair.  He won’t call his brother his brother.  His father refers to him as “your brother,” but the older son, speaking to his father, calls him “this son of yours.”  What is unfair?  The older son had been slaving away under the father’s authority and had been given nothing for his efforts, while the younger son had been living an irresponsible life of blatant disobedience to his father and he was being treated better!

The father’s appeal to the older son is an appeal to love.  Can’t you see?  Your brother was dead.  Now, he’s alive.  He was lost.  Now, he’s found.  How can we not celebrate when a sinner repents of his sin?

The older son despised God’s grace.  He saw it as license to sin.  He saw God’s law as a burden to be borne.  And he bore it.  He was living under the law; not under grace.  In a sense, both brothers were suffering from the same thing.  The younger brother left his father by disdaining his law and trampling it under foot.  He couldn’t get rid of the law, however.  It convicted him as guilty and unworthy.  The older brother looked at his obedience to the father’s law as the means of obtaining status in the family.  That left him embittered and disillusioned.  Those who reject God’s law, feed their flesh, and refuse to repent of their sin are outside of the father’s love.  Those who rely on their obedience to God’s law and slave away under it are likewise outside of the father’s love.  The father’s love is there where there is no repentance.  But no one can know this love or receive this love except through repentance.

Father’s Day could just be a way for merchants to make money selling stuff.  Or, we could regard it as an opportunity to reaffirm what a true, genuinely Christian, patriarchy is all about.  Obviously, if the father is the head of the home the children are required to obey him.  His wife, the mother of the children, is to submit to him.  In this way she teaches the children respect.  But if Christ, who is the father in this parable, is to teach us Christian fathers how to be fathers, we must listen to this story, paying close attention to the father’s behavior.  As we do, we learn three things that God would have us know about godly patriarchy.

First, the father doesn’t excuse the prodigal son’s sins.  Neither should we.  It isn’t fatherly love to excuse our children’s sins and to redefine sin so that our children will no longer be guilty of it.  Nowhere in this parable do you see a hint of the father condoning the younger son’s sinful conduct.  In fact, he said that this boy was dead.  He was lost.  That’s the father’s view of sin.

Second, the most important authority of the father is the authority of the gospel.  How was the prodigal restored as a son?  If he had had his way, he wouldn’t have been a son, but only a servant.  He was restored by the grace of the father.  The father covered up the son’s sins, not by excusing them, but by forgiving them.  He forgave without requiring any payment.  The Christian father looks to Jesus and sees him pay the payment for sin on the cross.  He shares that forgiveness with his family.  He insists that that forgiveness is the final word.

This brings us to the third lesson this story teaches us about Christian fatherhood.  Christian fathers teach their children to love each other.  We regard one another, not as servants under trial, or sinners to be judged, but as saints.  We were walking the walk to death and damnation.  Left to our own devises, we would be bound in the chains of sin and death.  But God saw our misery, had mercy on us, forgave us, drew us back to him, converted us, and honored us.  He put the best robe on us: the robe of Christ’s blood-bought righteousness.  This is how we treat one another.  A son or daughter of God is a brother and a sister.  Jesus says that what we do for one of the least of these, we do for him.

Christian patriarchy isn’t men bullying their wives and children.  It is Christian fathers imitating their Lord Jesus.  They teach their families to find rest and peace in his wounds.  Their homes are refuges for the lost.  Forgiveness is given freely.  It binds the family together in the unity of the Spirit and the bond of peace.