It is politically incorrect in our time for me to say with any certainty that the man is the head of the house. Far too often I hear the joke, “she wears the pants in this house,” or “no, she’s the boss.” On some matters, I understand (happy wife, happy life, right?), but as of late, as I reflect on past experiences in my mind, I have found it to be an excuse for men to be lazy and put aside their God-given responsibilities which are written into creation. God has given to men the headship of the family to lead it in the way it should go. With this sort of joking rhetoric, men are not taking seriously the curse given to women in the fall. Genesis 3: 16.  God cursed all women with a desire to rule over their husbands, thus making their godly and honorable submission to them severely more difficult and labored. What of god-fearing men? Has it become so light a thing to reenact the fall into sin? What good came of Adam’s silence as he stood next to his wife as the devil tempted her? He ignored his responsibilities from God and the word of God was supplanted in his heart by the word of the devil. 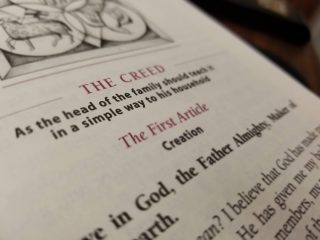 Now, I do understand, being married myself, that there are things which women typically do better than men. I appeal to Ana’s judgement when the time is right and appropriate. There are many times when both of us should step aside from the person asking us a question in order to consult one another’s opinion on the matter. This publicly confesses before the world an image of a godly husband who tenderly listens to the desires and needs of his wife and a godly wife who humbly submits to her husband.

In matters of faith, the father is incredibly influential, whether he leads toward God and His word or away from Him by his negligence of the word and godly-living. My young boys need to witness a father who takes seriously the responsibility to lead his family in the way of righteousness. They will have plenty of examples of fathers who have gone down the wide road which leads to hell. They will see all sorts of men who, because of selfishness, greed, and licentiousness, will fail to be the example of Christ to their families.  They will see men treating headship like rank tyranny. They will see and hear men speaking poorly about their wives and complaining about their marriages. Sadly, they will have friends with parents who are divorced; some, more than once. Christian fathers must fight against what will overwhelm our young men and women in the realm of headship. None of what they will see from the world should be found in their Christian father because Christ did not set out to abuse, physically or verbally, His bride the Church. Rather, He joined Himself to her into death, leaving His father and mother, in order to raise her up and present her as holy and blameless without spot or wrinkle. Read at length these words in Ephesians 5. What has been written here is also testified to by the Apostle Peter who wrote, “Husbands, in the same way be considerate as you live with your wives, and treat them with respect as the weaker partner and as heirs with you of the gracious gift of life, so that nothing will hinder your prayers” 1 Peter 3:7.

So, when I write about headship, I am referring to that which all men must learn from Christ’s example.  This, to be clear, is not some sort of mutual submission. Jesus does not submit to the will of the Church (Oh, how problematic that would have been), but He leads the Church forth in holiness and righteousness. He speaks well of her before His Father.  Although her sins are many, he forgives them and covers them up. Any and all men who wish to serve the Lord in holiness, must submit not to their wives, but to God, the Father Almighty. In John 14, Jesus says to His disciples on the night when he was to be betrayed, “If anyone loves me, he will keep my word, and my Father will love him, and we will come to him and make our home with him. Whoever does not love me does not keep my words. And the word that you hear is not mine but the Father’s who sent me.” When we hear in English, “keep”, I often find people believe it to mean obey. Certainly, Christ does tell us to obey His word, but here this word in Greek means to guard or watch over. To be the Head of the Household, the spiritual head of the family, requires a great work in devoting oneself to the study of the Word of God so that the whole family learns to guard it with their lives. No man who enters into marriage, whether young or old, can deny in good conscience that God demands of him to enter into faithful catechizing of his house. If a man refuses such, he should be admonished, lest he be allowed to despise the head of the Church, his living example, Jesus Christ.

Blessed is the man who does catechize his family leading all in the way of truth. His wife is his quiver and his children are the arrows which fill it. The man’s quiver holds tightly to him, guarding and protecting the arrows at all times, keeping them sharp and ready for all attacks of the evil one. When it is time to go out to meet the enemy at the gate, the man who has readied his family with God’s Word goes out with confidence, for the Lord goes with him (Psalm 127). He knows whether he lives or dies, or whether his wife or children live or die, they are with the Lord. So start now and waste no more time.

Handling the Word of Truth can be a little daunting. You may ask, “Where do I start?”  Martin Luther crafted the Large and Small Catechisms to be of aid to fathers and mothers, but most especially to fathers. In the Small Catechism, he begins each section with, “As the head of the family should teach it in a simple way to his household.” It is no mistake that Luther’s Small Catechism does not have “wife/husband” in the explanation of the First Article of the Creed. He leaves it “wife”.  He wrote it expecting husbands and fathers to be the instructors of the faith. He would begin with the primary texts, for example, the Ten Commandments, the Apostle’s Creed, and so on.  Then, when his children grew up (even as young as 3 and 5, like mine) they would begin to ask, “Daddy, what does this mean”, to which the father would give the faithful and cheerful answer, “I believe that God has made me and all creatures…. He also gives me clothing and shoes, food and drink, house and home, wife and children….” This is no mistake.  Luther wishes to set forth the godly example of headship even within the context of the Small Catechism. Now the journey of true and godly headship has begun, but it can go even further.

Wouldn’t it be incredible if we could reverse this negative view on godly headship of the man? Granted it won’t be easy to do in today’s hostile climate, but it begins in friendly conversations. Husbands, when other men are complaining about their wives don’t join them, but share the incredible nurturing nature of your wife who submits joyfully to you because of her faith in and reverence for Christ, the head of the Church. Tell them what fantastic work she does in teaching the children when you leave the house. Tell them you don’t fear that they will be led astray in your absence. Wives, when you are gathered around your friends who are tearing down their husbands, tell them how tender and compassionate your husband is toward you and the children. Explain to them how he listens to you and, then, proceeds to make decisions which he believes are best for the whole household. Together, work toward the common goal of making these things easy to say because they are the reality of your marriage. Most importantly confess your sins and failures to one another. Then, give to the other the forgiveness of Christ so that sins may be covered and only blamelessness may be seen by all.

If what I have written seems unattainable for your marriage, do not lose hope. Read the Word.  Then, go and confess your sins to your spouse. Show your spouse by Scripture where you have failed in your duty. Then, show your spouse her sins. If she repents, your marriage will only be strengthened in Christ who covers your sins by His blood. Should she not repent, then it is time to seek out your pastor together. Remain hopeful in and through all difficulties, praying to the Lord for strength, wisdom, and council, knowing that the Lord is at work through the word to lead all men to the knowledge of truth.

Though I have not desired to take up the responsibilities of women in this article, I wish to say this much. When a man has failed in his responsibility, his wife should hold him accountable. Until such a time when he will resume his responsibilities, she should, in his stead, faithfully teach her children, just as she would do when he leaves the house for work or travel. In this way, the children are not left without the hope of salvation. As it says in 1 Timothy 2, “Yet she will be saved through childbearing—if they continue in faith and love and holiness, with self-control.” A faithful woman will continue to teach her children, even if her husband has failed in his duty.

Finally, husbands, treasure your godly wife. Always remind her of the gift which she is to you from God. “An excellent wife who can find? She is far more precious than jewels. The heart of her husband trusts in her, and he will have no lack of gain. She does him good, and not harm, all the days of her life.” Proverbs 31:10-12.