The following translation was the lead article for the January 25, 1910 issue of Der Lutheraner, the Missouri Synod’s German predecessor to the Lutheran Witness.  The author is Ludwig Fuerbringer, who served as professor at Concordia Seminary – St. Louis from 1893 to 1947.  He also served as its president from 1931 to 1943.  Fuerbringer’s “Old Truths” about marriage are still wise counsel for all of us today. – R.L.L.

The course of the church year has brought us once again back to the Holy Gospel concerning the Wedding at Cana.  The Lord Christ had been guest at a wedding.  In so doing he confessed the divine institution of marriage.  For God himself has instituted the holy estate of marriage.  He led the first married couple to one another and blessed their union.  “He who in the beginning made man, he made them man and wife and said: therefore a man will leave his father and mother and cleave to his wife, and the two will be one flesh,” (Matthew 19:4-5).  And still today, God wills to be the founder of the marriage bond and desires to bless married people in this estate.  The saying that “good marriages are made in heaven” has proof in Scripture.

But when we take a look around in this world, how are most marriages established?  Very few ask the question, “What says the Lord?”  Most men do not turn in prayer to the Lord, from whom a prudent wife comes (Proverbs 19:14).  Men say, “Give me this one, for she is pleasing to my eyes” (Judges 14:3).  Thus spoke Samson to his parents concerning the wife he found for himself among the daughters of the Philistines.  Overall, how many young people really turn to their parents, who are God’s representatives on earth and have both right and authority to marry their children off?  Countless marriages happen behind the backs of parents, entered into without their knowledge and consent.  Too many young people are entering marriage without serious investigation and mature consideration.  Outward things, like a good dowry or a pretty face, determine the choice.  Seduction and abuse are daily occurrences for those who marry after barely knowing one another.  Recklessly entered-into marriages are becoming so prevalent, that well-meaning men, who have the well-being of the state and civil society in mind, ask the question: what will become of this?   And many a Christian youth, who has learned better, forgets what he has learned.  He blindly goes along with the world, assimilating into its disorderly culture.  Or, he may even find himself in full agreement with the the world’s frivolous assessment of this matter.

Out of recklessly entered-into marriages spring frivolous divorces.  According to God’s will, a marriage should be a bond for life.  “What God has joined together, let no man put asunder,” (Matthew 19:6).  The Scripture recognizes only a single valid reason for divorce, that of marital infidelity.  Through the destruction of the marriage bond, so also the marriage is broken (Matthew 19:9).  And when a husband deserts his wife with evil intent or a wife her husband, and when there is no desire to return, so also the marriage bond is dissolved.  Here the innocent party may seek after a legal divorce.  All other reasons: sickness, insanity, incompatibility, poor treatment, etc. – these are not valid before God.  But what is the state of affairs in the world, even in our own country?  As one recklessly joins himself to another, so one frivolously runs away.  Thousands and Ten-thousands of divorcees run about, entering into new so-called “marriages” and are still bound in God’s eyes to other husbands and wives.  They are nothing other than adulterers in God’s eyes.  When the judges in our courts estimate the number of divorce cases which are handled and closed on a given day, in only a few hours 30, 40, or 50 marriages are destroyed.  Among these often there is not a single divorce which can stand up before God.  The flippant world around us jokes about it, how the divorce-mill is grinding once again.  But the more seriously-minded recognize this, that such a culture kills and buries the institutions of family and state.  The seriously-minded ponder solutions, and Christians especially have the holy duty to witness against such horrid conditions, to keep themselves unstained from them.  They are and should be the salt of the earth.  But where salt has lost its savor, what are we supposed to use?

But married people should not only go with one another the way through this life, sharing with one another the joy and suffering of life and not separating until death parts them.  Above all, they should go together the way to heaven, helping one another as they press on towards salvation.  Therefore it is necessary that they are also one in what is most important, namely in their faith and in love of the Lord.  They shouldn’t merely say: “Where you go, I will go also; where you remain, there I will remain also.”  But above all, also this: “Your people is my people, and your God is my God.”  The saying should also be true for them: “one Lord, one faith, one baptism” (Ruth 1:16, Ephesians 4:5).  One may not warn seriously enough against mixed marriages with those who believe differently or marriages with 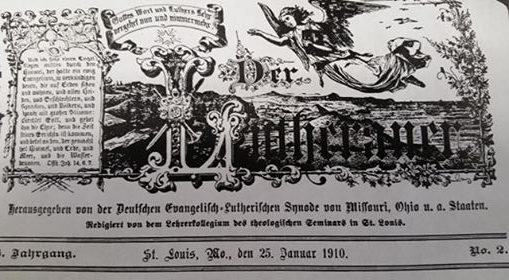 unbelievers.  Experience has proven hundreds of times over that such mixed marriages foster religious indifference and falling away like nothing else.  How can it be any different, when one spouse goes to this church and the other spouse to another?  And what about when children come into play?  Do they follow the religion of the father or the mother?  Or what about when one spouse goes to church, and the other goes along with the world?  What if one spouse prays, and the other makes fun of it?  One in faith, one in confession, one in the love of the Lord, sharing joy and suffering with another, one carrying the burden of the other, the man full of love for his wife, the wife in submission to her husband, both faithful to one another until death, raising children in the discipline and instruction of the Lord – these are how a Christian marriage works.

For certain, these are old truths, but they are still correct and necessary today.