Concordia Portland has its loud and proud Gender and Sexuality Resource Center:

The vision of the Gender and Sexuality Resource Center (GSRC) is to create and foster a safe and inclusive campus climate that supports the academic and personal development of all students so they can reach their ultimate goal of graduation.  Specifically, the GSRC seeks to serve those who identify as gender or sexual minorities, those who believe they have experienced Title IX violations such as sexual assault, and the University community as a whole through educational programs and activities which support the vision and mission. The mission of the GSRC, rooted in Christ’s call to love, is to be an affirming, empowering, and supportive space for Concordia students.

Note how the support of sin isn’t enough without also violating the Second Commandment.

P.E.A.C.E. is a Concordia University, Saint Paul club for students who find themselves outside of society’s hetero-normative standards, for their allies and friends, and for those who seek greater understanding and desire to foster a climate of mutual respect and open communication. The club provides both a metaphorical and physical safe space on our campus for fostering a greater sense of community and mutual respect.

Both of these are not new.  They have been around for a while and the culture that has created them has been at these Concordia’s for even longer.

Two overtures have been submitted in relation to Portland, one of which has been placed into Omnibus A (Omnibus is a place where overtures get sent to be considered apart from the convention by some other entity in the LCMS.) . The second overture has been put into a respectfully decline resolution for not following bylaws.

The first one is Ov. 7-21 which has been sent to Omnibus A (referral to Concordia University-Portland Board of Regents). 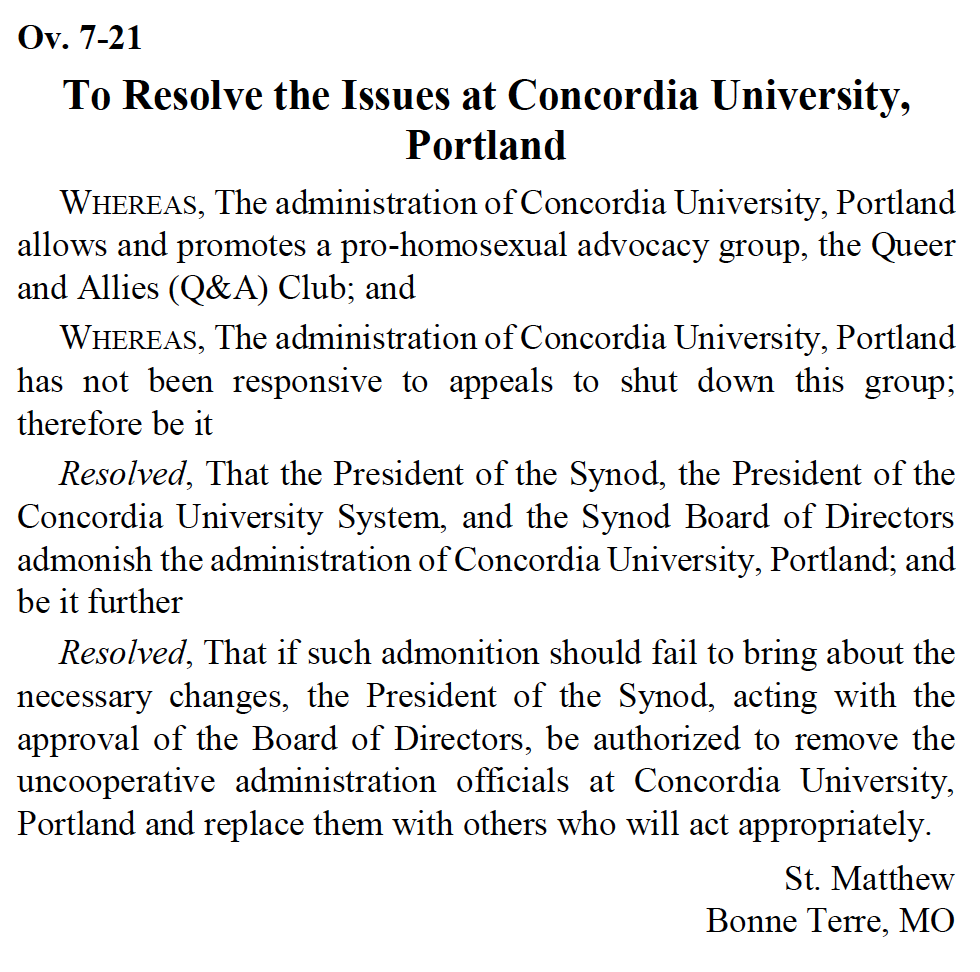 7-22 is more drastic but also attempts to address the issue.  This one has been placed into Resolution 7-07 To be “respectfully declined” on the reason that it circumvents existing bylaws: 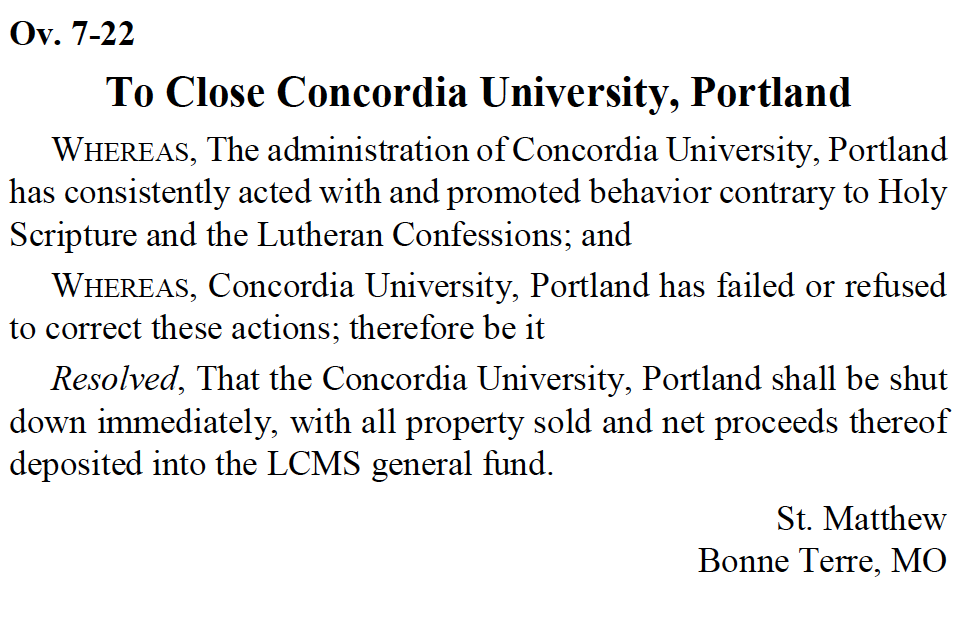 There is still time to present feedback to Floor Committee 7 which chose to pass and decline these overtures.  The reasoning of “circumvents bylaws” is not really that good.  The Synod in convention is the highest governing body of the LCMS.  If they want to shut it down, the Floor Committee and various employees of Synod should be able to figure out what is required for that to happen.  If not, what authority does the convention actually have?  I have seen this before that since a resolution doesn’t have the actual bylaws and so forth filled out properly, the matter is dismissed.  I say it is time for the elected officials to serve the synod rather than the other way around.  When I as a parish pastor get requests for something in my congregation that just aren’t worded quite right I offer my experience to help correct it so that the spirit of the matter is followed.  What would happen if I just rejected things because it wasn’t “technically” filled out properly?

The ungodliness going on up in Portland needs to stop.  It is direct assault upon the teachings of Scripture and a gross capitulation to the world and its demands that the church give up her Lord for the ruler of this world.  The situation at Concordia St. Paul is similar.

If you think that the Floor Committee should reconsider their actions, please consider writing them kindly to reconsider and put something before the convention to be discussed and debated and even acted upon.

From Rev. Charles Henrickson, the pastor of St. Matthew in Bonne Terre, MO:

“Reactions to the resolutions should be addressed in writing directly to the chairmen of the floor committees at least one week prior to the convention for consideration during July 19 committee meetings. Opportunity to address the floor committees personally will be provided during the July 20 (8:30 a.m.–noon) open hearings.”
http://blogs.lcms.org/…/official-notice-2019-lcms…

And the chairman of Floor Committee 7, University Education, to whom you may address your comments in writing, is this:

And please be respectful toward President Scharr, who is a good and honorable man. He is not responsible for all the decisions of his committee.

I would second that Pres. Scharr is a good and honorable man.  Please consider writing him with your thoughts on this matter.