A woman, when she is in labor, has sorrow because her hour has come; but as soon as she has given birth to the child, she no longer remembers the anguish, for joy that a man has been born into the world. Therefore you now have sorrow; but I will see you again and your heart will rejoice, and your joy no one will take from you.

It is a truism that the preacher shouldn’t preach about politics from the pulpit.  After all, there must be a separation of church and state.  Isn’t that right?  No, not necessarily.  The preacher is to preach God’s word period.  If God’s word requires that he preach about matters that are considered to be political, so be it.  When the civil authorities disobey God, they are to be called to account for their disobedience.

Churches and preachers err if they think that it is through political processes that God establishes his kingdom on this earth.  Jesus told Pilate that his kingdom was not of this world.  He told his disciples that they would weep and lament while the world would rejoice.  Christ’s kingdom is invisible to the human eye.  We wait for him.  We aren’t in charge.  He is.  We preach his gospel, administer his sacraments, confess his truth, pray in his name, and we wait.  The little while we wait seems like an eternity.  But it’s really only a little while.

And while we wait, we act.  We confess and we preach.  We talk.  We talk the talk that God gives us to talk whenever we can do so.  Sometimes this means we engage ourselves politically.

God doesn’t endorse any political party.  He’s above all that.  But if and when the civil authorities in America establish laws that are direct attacks on the authority of God, it becomes the duty of us Christians to speak God’s word and to tell God’s honest truth about these attacks.  I am talking specifically about the attack against marriage and children carried out by the United States government.

The American government’s war on children was declared on January 22, 1973.  The Supreme Court of the United States ruled, in its Roe versus Wade decision, that a woman has a constitutional right to have her unborn baby killed.  The Roe versus Wade decision struck down all state laws written to protect the lives of unborn babies.  Since the passage of Roe versus Wade, over fifty million unborn babies have been legally killed in America.  The church has the duty to condemn this crime and to speak God’s word of judgment against America for sanctioning it.  The same Lord Jesus who said, “Let the little ones come to me, and do not prevent them” will judge those who slaughter the unborn and those who defend this murderous business by the obscene claim that it is a woman’s right to kill the fruit of her womb.

The attack on marriage has been going on for a long time.  First, the various states made divorce “no fault.”  No need to prove adultery to get a divorce.  As laws governing divorce made it easier and easier to obtain, marriage as a permanent union of one man and one woman was under attack by the civil authorities.  The most recent atrocity of the Supreme Court is the Obergefell versus Hodges decision of June 26, 2015, where the Court ruled that no state in the United States had the power to define marriage as the union of one man to one woman, but that they must define marriage to include the marriage of a man to a man and a woman to a woman.  Thus, the state sanctifies serial sodomy.

Shame on the government of the United States!  Who are these people who are powerless to reign in a rogue court that defies God and offends basic human decency with its gruesome and perverted laws?  Where are the voices of reason, of justice, of compassion?  The blood of millions of dead babies cries out to heaven for vengeance.  God rained fire from heaven on Sodom and Gomorrah.  Will he spare America?  We hear talk about American exceptionalism, as if America is somehow different from all other nations.  No nation is exempt from God’s judgment.

God established marriage to be the foundation for the family.  Husbands and wives become fathers and mothers.  Children need fathers and mothers.  Marriage is for the benefit of children.  It’s what they need.  We care about what children need because they are precious in God’s sight.  Children are true wealth.  You can make millions of dollars in your life.  When you die, somebody else is going to spend it.  But the children that God gives you have immortal souls.  They are redeemed by the blood of Jesus.  God receives them in Holy Baptism, washes away their sin and fills them with his Holy Spirit.  God loves all of the children of this world.  God blesses marriage with children because he loves us.

Behold, children are a heritage from the Lord,
The fruit of the womb is a reward.
Like arrows in the hand of a warrior,
So are the children of one’s youth.
Happy is the man who has his quiver full of them;
They shall not be ashamed,
But shall speak with their enemies in the gate.

I have preached on this Gospel Lesson many times over the years.  I have not said much about what Jesus says about a woman in labor who gives birth to a baby.  His meaning is so obvious that it needs little explanation.  But is it obvious?  Or is the spirit of the American culture so poisoned against children that we can no longer assume that people understand what Jesus is saying?  Listen once more to what he says:

A woman, when she is in labor, has sorrow because her hour has come; but as soon as she has given birth to the child, she no longer remembers the anguish, for joy that a man has been born into the world. 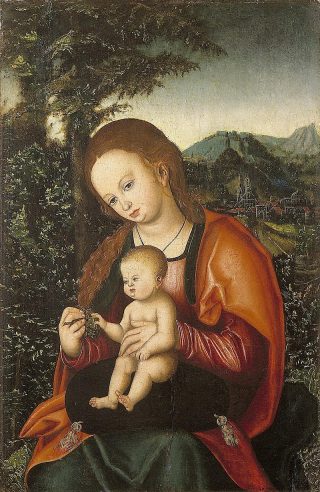 Is this true?  Of course, it’s true.  Jesus said it!  It must be true because Jesus is the truth.  But do people in America believe that this is true?  Is it true that a woman, who suffers through the pains of labor, enduring what no man can understand, forgets her pain when the baby is born out of joy that another human being has been born into this world?  Or has the unremitting cultural and political assault on children callused the conscience of our nation, marring the maternal joy of seeing a child born into this world?

There is joy when a man is born into this world.  Most translations don’t translate the Greek here with the English word man.  It sounds so politically incorrect.  But that’s the word that Jesus used.  A man is born.  This man may be male or female.  There are no other options because God determines the sex of a human being and he invented only two sexes.  The baby is called a man because the word man here refers to a human being.  The Bible uses the word man generically to refer to men and women, boys and girls, old folks and newborns.  It also uses the word man specifically to refer to a male human being or to an adult human being.  But Jesus could have said child.  He could have said baby.  He didn’t.  He said man.  Jesus is saying that this birth is a wonder, a joyful event, something to celebrate, something so precious that it drives out of the mother’s mind the memory of her pain.  This tiny little baby that lies in her arms is more than the expression of marital love, more than the fulfillment of maternal desire, more than what we, according to our natural reason can understand.  This baby has value beyond our ability to measure.

How much God loves us!  His love isn’t sentimental.  It is solid.  It is permanent.  It stays.  We’ll suffer for a little while.  We’ll do without, experience disappointment, and wonder how God is going to fix what ails us.  A little while is but a little while.  God’s love is eternal.  When Jesus goes to the Father he goes as the man who defeated death and the grave.  He goes as the victorious man.  He gives his victory to us.

Jesus looked ahead as he pondered his crucifixion.  He saw the pain.  He knew he would drink down to its bitter dregs the wine of God’s retribution against all sinners.  He would suffer hell on the cross.  But he looked beyond his suffering.  He saw the joy he would find in the presence of his Father.  He saw the joy he would share with us, his dear Christians.  He directs us to look beyond the little while of our suffering to the joys he has prepared for those who love him.  Look ahead and see that Jesus has prepared for us a joy that time cannot dim and that nobody can steal.  It’s the joy of living at one with God and one another forever in heaven, where no sin can enter, no death, no evil of any kind, and no pain.

We have received God’s love in Christ.  His suffering for us is our deliverance from sin, death, and hell.  We embrace this suffering by faith and see that all our sins are forgiven.  We are the dear children of our Father in heaven.  The little whiles of our suffering are nothing in comparison with his eternal love and the joy in store for us in heaven.

Thank God for establishing marriage and for blessing marriage with children!  When the state passes evil laws that attack marriage and provide legal protection for the butchers of the unborn, we will speak out against this evil.  We will confess that marriage and children are God’s blessing.  We will rejoice in the gift of human life.

God is prolife.  So are his children.