“The Spirit of Truth”

“But now I go away to Him who sent Me, and none of you asks Me, ‘Where are You going?’ But because I have said these things to you, sorrow has filled your heart. Nevertheless I tell you the truth. It is to your advantage that I go away; for if I do not go away, the Comforter will not come to you; but if I depart, I will send Him to you. And when He has come, He will convict the world of sin, and of righteousness, and of judgment: of sin, because they do not believe in Me; of righteousness, because I go to My Father and you see Me no more; of judgment, because the ruler of this world is judged. I still have many things to say to you, but you cannot bear them now. However, when He, the Spirit of truth, has come, He will guide you into all truth; for He will not speak on His own authority, but whatever He hears He will speak; and He will tell you things to come. He will glorify Me, for He will take of what is Mine and declare it to you. All things that the Father has are Mine. Therefore I said that He will take of Mine and declare it to you.” John 16:5-15 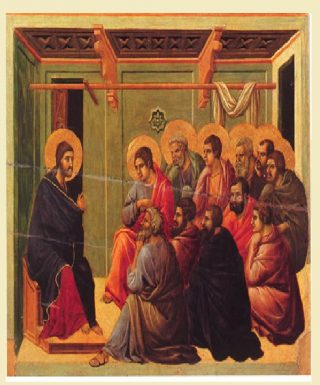 The historic name for this Sunday is Cantate, which is Latin for the word sing, as in “Sing unto the Lord a new song.”  Psalm 98, on which today’s Introit is based, begins with the words:

Oh, sing to the Lord a new song!
For He has done marvelous things;
His right hand and His holy arm have gained Him the victory.
The Lord has made known His salvation;
His righteousness He has revealed in the sight of the nations.
He has remembered His mercy and His faithfulness to the house of Israel;
All the ends of the earth have seen the salvation of our God.

We sing to the Lord what the Lord has done for us.  He has made known his righteousness and salvation to this world.

In today’s Gospel Lesson, Jesus promises the Holy Spirit, who will guide his apostles, and through them his church, into all truth.  The Spirit of truth will reveal to the world the righteousness and salvation that Jesus has brought to them by his crucifixion and resurrection from the dead.

Today is also Mother’s Day.  Last week, as my mother lay dying at a hospice facility in Brooklyn Park, Minnesota, her children gathered around her and sang hymns.  What we sang to God as our mother was dying is what we learned in our home growing up.  Mom died early Thursday morning.  Listen to a couple of verses from the hymn, “If God Himself Be For Me,” that we sang to her on Tuesday.

He canceled my offenses,
Delivered me from death;
He is the Lord who cleanses
My soul from sin through faith.
In Him I can be cheerful,
Bold, and undaunted aye;
In Him I am not fearful
Of God’s great Judgment Day.

Naught, naught, can now condemn me
Nor set my hope aside;
Now hell no more can claim me,
Its fury I deride.
No sentence e’er reproves me,
No ill destroys my peace;
For Christ, my Savior, loves me
And shields me with His grace.

The same truth in which we were indoctrinated from the time we entered this world is the truth that accompanied my mother as she left this world.  Jesus promised,

However, when He, the Spirit of truth, has come, He will guide you into all truth.

Jesus was talking to his apostles.  We acknowledge the New Testament as God’s word.  It is wholly truthful in everything it teaches.  We know this is so because Jesus, who speaks the truth, promised to them the Spirit of truth, who would guide them into all truth.

Not some of the truth; all of it.  It’s not as if the Spirit had things to reveal about life, death, Jesus, forgiveness, heaven, and hell, salvation and damnation that he just forgot to tell the apostles.  No, Jesus said that the Spirit would guide them into all truth.  This is how we know that he did.  And this is how we know that the apostolic Scriptures – what we call the New Testament – are the truth, the whole truth, and nothing but the truth.

Any teaching that claims to be apostolic but is not drawn from the Scriptures alone is false teaching, presumptuous teaching, worldly teaching.  And we know that the world’s teaching about spiritual matters is wrong.  This is why Jesus sent the Spirit.  He sent the Comforter, the Advocate, to show the world’s spirituality to be wrong.

“I’m not religious.  I’m spiritual.  I don’t believe in organized religion.  I follow the guidance of the spirit within.”  Have you ever heard this kind of confession?  What do you make of it?  Well, listen to Jesus.  He can explain it to you.  He says:

I tell you the truth. It is to your advantage that I go away; for if I do not go away, the Comforter will not come to you; but if I depart, I will send Him to you. And when He has come, He will convict the world of sin, and of righteousness, and of judgment: of sin, because they do not believe in Me; of righteousness, because I go to My Father and you see Me no more; of judgment, because the ruler of this world is judged.

The Comforter is also called the Helper or the Counselor.  He is the Holy Spirit.  He speaks for us.  And he exposes the lies of the world.  He’s right and the world is wrong, and I can guarantee you one thing: whenever anyone disparages the church, dismisses “organized religion,” and lays claim to some kind of spirituality that he finds all by himself, he is a victim of the very falsehoods that Jesus sent the Holy Spirit to refute.

Three words: sin, righteousness, judgment.  These are religious words, spiritual words, if you will.  And what the world thinks they mean is wrong.  Only the Holy Spirit, the Spirit of truth, who takes what belongs to Christ and declares it to us, can expose the falsehoods of this world’s religion and set the captives free.

What is sin?  The world says that sin is when you break its rules.  Driving across North Dakota, one is met by the billboard with the North Dakota state religion expressed in two words: “Be Nice.”  If you are not nice – and being nice means you may not judge anyone for doing anything (except not being nice) – you are guilty of sin.  The world has its rules by which it determines what sin is and isn’t.

The Spirit of truth says a sin is when you do not believe in Jesus.  God’s law is not that we be nice.  God holy law requires holiness and holiness cannot tolerate sin.  So God’s law condemns the whole world, the entire human race, as sinful.  They do not love God above all things.  They do not love their neighbors as themselves.  The whole human race is condemned by God’s law.

Jesus has borne God’s punishment against all sins ever committed against his law.  By bearing the punishment, Jesus took away the sin.  This is what the Spirit of truth reveals.  He speaks the gospel to us.  He tells us that us we are forgiven of all our sins for Christ’s sake.  Only Jesus has forgiveness to give.  Those who believe the gospel of Christ believe in Jesus.  Their sin is forgiven.  The Holy Spirit convicts those who do not believe in Jesus of sin.  Only Jesus has borne away our sin.  Any notion of spirituality that does not confess Jesus as the Lamb of God who takes away the sin of the world is a bogus spirituality, a lie, a delusion – that’s what the Spirit of truth says.

What is righteousness?  The world is enamored with its own pretenses to righteousness.  Statues of heroes display and celebrate military victory.  The righteousness this world admires is what can be put on display for the admiration of others, so that they, by emulating the righteous deeds of righteous people, might obtain a righteousness of their own.  For the world, righteousness is something visible.

Not so, says the Spirit of truth.  Jesus explains how the Holy Spirit will show that the world is wrong in what it says about righteousness.  He says, “Because I go to the Father, and you see me no more.”  The true righteousness by which we become righteous before God is nothing you can see.  It is hidden.  It isn’t the good deeds we display to the world, asking for their approval and praise.  It is not the good deeds we manufacture for ourselves, as we endure this or that spiritual self-help regimen.  No, the righteousness with which we are clothed, that presents us to God as acceptable in his sight and entitles us to enter into God’s eternal kingdom even while we are living here on earth, is the righteousness of Christ going to the Father.

It is blood-bought.  Who can discern his own sins; much less understand what our Lord Jesus endured?  It was as Jesus went to the Father by way of Calvary that he fulfilled all righteousness.  And now, at the right hand of the Father, he intercedes for us.  He points to his obedience and his suffering as the replacement for our disobedience and sin.  He holds before the Father the perfection of his obedience, and shows him that this is the robe that covers us.  This is what presents us as a spotless bride before her husband.

What is judgment?  It’s not what the world says it is.  The prince of this world, the liar, the deceiver, the slanderer of God’s saints, is judged.  He would seek to refute our true religion and replace it with a counterfeit.  He would deceive us, and seduce us into misbelief, despair, and other great shame and vice.  But he cannot.  He is judged.  By the same obedience that make us righteous, Jesus crushed his lying head and took away from him his power to deceive.

Oh, he remains like a roaring lion, seeking someone to devour.  But where God’s word sounds forth, where the Spirit of truth proclaims to us the truth about Christ, there the devil is bound.

When I was a junior in high school, Johnny Cash sang a song about my generation with the rather pathetic refrain, “And the lonely voice of youth cries: what is truth?”  How sad it is that, for the most part, my generation never found it.  The baby boomers gave it up.  The millennials, for the most part, never had it.  And as a world explodes in technological advances that can provide information worldwide instantaneously, that same world is blinded more and more by the self-imposed ignorance of what is falsely called spirituality.

The Spirit of truth that Jesus sent is the only One whose truth is really true.  It’s all about Jesus.  It’s all for you.  It will comfort you in life.  It will prepare you for death.  To know the truth is to know God and to be known by him.