Treats of the Sublime Articles Concerning the Divine Majesty, as:

I. That Father, Son, and Holy Ghost, three distinct persons in one divine essence and nature, are one God, who has created heaven and earth.

The Holy Trinity is the only true God: Father, Son, and Holy Spirit.  He is three distinct persons in one divine essence.  More technically three hypostases in one 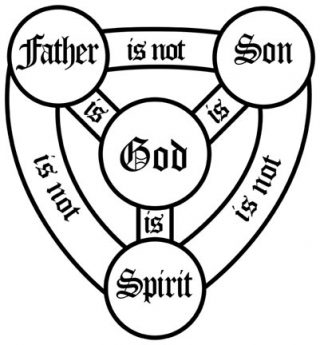 ousia.  Therefore we can correctly say that there is one God, but three persons (Matthew 28:16-20).

God created all things, both immaterial and material.  All that we have and see and know are made by Him.  Though we usually attribute creation to the Father, all three persons are involved in Creation.  Thus the full Godhead is involved in every aspect of His creation (1 Corinthians 8).

II. That the Father is begotten of no one; the Son of the Father; the Holy Ghost proceeds from Father and Son.

Though God is one, each person of the Trinity is distinct. The Father is begotten by no one. The Son is begotten of the Father alone (John 1:1-18).  The Holy Spirit proceeds from the Father and the Son (John 15:18-27).  All three are eternal and united.  None are created. None is less than another.  Yet God is still one.

III. That not the Father nor the Holy Ghost but the Son became man.

Only the Son became man.  Yet still He is still fully God.  The Father and the Spirit never become man, nor do They suffer on the cross or die.  Yet even with this fact God is not divided but still one.

IV. That the Son became man in this manner, that He was conceived, without the cooperation of man, by the Holy Ghost, and was born of the pure, holy [and always] Virgin Mary. Afterwards He suffered, died, was buried, descended to hell, rose from the dead, ascended to heaven, sits at the right hand of God, will come to judge the quick and the dead, etc., as the Creed of the Apostles, as well as that of St. Athanasius, and the Catechism in common use for children, teach.

Concerning these articles there is no contention or dispute, since we on both sides confess them. Therefore it is not necessary now to treat further of them.

The Son became man not by the will of man but rather by the Holy Spirit.  The Virgin Mary is the mother of God (theotokos), but she was passive in His conception. Instead it was the Holy Spirit acting through the word of God brought by the Angel Gabriel that caused the Incarnation (Luke 1:26-38).

This God-man Jesus Christ, son of Mary, step-son of Joseph, son of David, was born in Bethlehem in 1-3 B.C. and grew up in Nazareth. He died under Pontius Pilate in AD 33.  He was buried and He descended into hell. On the third day He rose again (1 Corinthians 15:1-11).  Jesus Christ ascended to heaven 40 days after His resurrection in AD 33 (Acts 1:1-11).  He is now seated at the right hand of God and sent the Holy Spirit 10 days later on Pentecost (Acts 2:1-41). He will come again to judge the quick and the dead.

This is all confessed in the Small Catechism and the Creeds (Apostles’, Nicene, and Athanasian).  These creeds make up the basic rule of faith.  This rule of faith is a summary of all that the Scriptures teach about God and His work.

There is no dispute between Rome and the Lutherans on these points.  In fact there is no dispute between Christians on these points. If one denies any part of these creeds or faith they are not saved and not part of the Church.  They are fundamentally not Christian for they do not believe in the right God. Therefore we confess that though Rome may be heterodox, they are still Christian.  As we do with the Eastern Orthodox, Calvinists, Anglicans, Baptists, Pentecostals, and other sects. They may have false doctrine but they are not full blown heretics at least with respect to the Trinity.  Oneness Pentecostals, Mormons, Jehovah’s Witnesses, Jews, Muslims and all other sects of their ilk are outside the Christian faith and are anathema.

1 We all believe in one true God,
Who created earth and heaven,
The Father, who to us in love
Has the right of children given.
He in soul and body feeds us;
All we need His hand provides us;
Through all snares and perils leads us,
Watching that no harm betide us.
He cares for us by day and night;
All things are governed by His might.

2 We all believe in Jesus Christ,
His own Son, our Lord, possessing
An equal Godhead, throne, and might,
Source of ev’ry grace and blessing;
Born of Mary, virgin mother,
By the power of the Spirit,
Word made flesh, our elder brother;
That the lost might life inherit,
Was crucified for all our sin
And raised by God to life again.

3 We all confess the Holy Ghost,
Who, in highest heaven dwelling
With God the Father and the Son,
Comforts us beyond all telling;
Who the Church, His own creation,
Keeps in unity of spirit.
Here forgiveness and salvation
Daily come through Jesus’ merit.
All flesh shall rise, and we shall be
In bliss with God eternally.