The quest for the Holy Grail has captivated the human mind for millennia.  From the Knights of the Round Table, to the Crusaders, to the Nazi’s and Indiana Jones, to even far eastern sages, this artifact has been highly prized.  It is rumored to be a 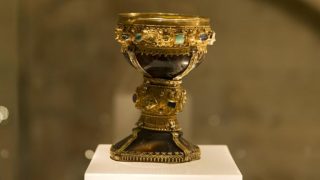 vessel that grants immortality or heavenly favor and blessing. In short, it is seen as an omnipotent wish granting device.

However, there are two grails spoken of in Scripture.  The first grail is the grail that all sinful humans will be forced to partake of.  It is the grail of God’s judgment and wrath. As Scripture says regarding this grail:

For in the hand of the Lord there is a cup with foaming wine, well mixed, and He pours out from it, and all the wicked of the earth shall drain it down to the dregs. (Psalm 75:8)

17 Wake yourself, wake yourself,
stand up, O Jerusalem,
you who have drunk from the hand of the Lord
the cup of His wrath,
who have drunk to the dregs
the bowl, the cup of staggering.
18 There is none to guide her
among all the sons she has borne;
there is none to take her by the hand
among all the sons she has brought up.
19 These two things have happened to you—
who will console you?—
devastation and destruction, famine and sword;
who will comfort you?
20 Your sons have fainted;
they lie at the head of every street
like an antelope in a net;
they are full of the wrath of the Lord,
the rebuke of your God.
21 Therefore hear this, you who are afflicted,
who are drunk, but not with wine:
22 Thus says your Lord, the Lord,
your God who pleads the cause of His people:
“Behold, I have taken from your hand the cup of staggering;
the bowl of My wrath you shall drink no more;
23 and I will put it into the hand of your tormentors,
who have said to you,
‘Bow down, that we may pass over’;
and you have made your back like the ground
and like the street for them to pass over.” (Isaiah 51:17-23)

9 And another angel, a third, followed them, saying with a loud voice, “If anyone worships the beast and its image and receives a mark on his forehead or on his hand, 10 he also will drink the wine of God’s wrath, poured full strength into the cup of His anger, and he will be tormented with fire and sulfur in the presence of the holy angels and in the presence of the Lamb. 11 And the smoke of their torment goes up forever and ever, and they have no rest, day or night, these worshipers of the beast and its image, and whoever receives the mark of its name.” (Revelation 14:9-11)

We do not need to quest for this grail, for it is ready and prepared for us.  It is the right condemnation for all our sin.  We will have this grail and all its wrath on the Last Day whether we seek it or not.

Christ, though, takes this cup of punishment when He subsumes all the evil of the world into Himself.  It is the drinking of this cup of eternal torment which Christ speaks of in the Garden of Gethsemane:

36 Then Jesus went with them to a place called Gethsemane, and he said to his disciples, “Sit here, while I go over there and pray.” 37 And taking with him Peter and the two sons of Zebedee, he began to be sorrowful and troubled. 38 Then he said to them, “My soul is very sorrowful, even to death; remain here, and watch with me.” 39 And going a little farther he fell on his face and prayed, saying, “My Father, if it be possible, let this cup pass from me; nevertheless, not as I will, but as you will.” 40 And he came to the disciples and found them sleeping. And he said to Peter, “So, could you not watch with me one hour? 41 Watch and pray that you may not enter into temptation. The spirit indeed is willing, but the flesh is weak.” 42 Again, for the second time, he went away and prayed, “My Father, if this cannot pass unless I drink it, your will be done.” 43 And again he came and found them sleeping, for their eyes were heavy. 44 So, leaving them again, he went away and prayed for the third time, saying the same words again. 45 Then he came to the disciples and said to them, “Sleep and take your rest later on. See, the hour is at hand, and the Son of Man is betrayed into the hands of sinners. 46 Rise, let us be going; see, my betrayer is at hand.” (Matthew 26:36-46)

Even though Christ sees the terror and anguish of all the Hell that we ever deserved He yet still drinks this cup of wrath to the dregs.  The sinless Son of God in the flesh takes on all our sin, our wretchedness, our evil, our hatred, our malice, our envy, our spite, our lust, all our most heinous thoughts, desires, and afflictions.  The eternal Son of Man also takes on all of the eternities we were ever to spend in Hell. All the punishments for all the humans who would ever exist in this fallen world were placed on Him as He drained the grail of wrath was prepared for us.

In its place, Christ now provides a new and truly Holy Grail:

26 Now as they were eating, Jesus took bread, and after blessing it broke it and gave it to the disciples, and said, “Take, eat; this is my body.” 27 And he took a cup, and when he had given thanks he gave it to them, saying, “Drink of it, all of you, 28 for this is my blood of the covenant, which is poured out for many for the forgiveness of sins. 29 I tell you I will not drink again of this fruit of the vine until that day when I drink it new with you in my Father’s kingdom.” (Matthew 26:26-29)

Instead of wrath, this Grail gives grace, instead of death and condemnation this Grail gives life.  In fact, it’s not the grail at all that does this but rather the contents of that Grail. For the true Holy Grail is that vessel that holds the very blood of Christ for you.  In His Holy Supper, you now have what many sought so long and hard for. It was not a simple cup hidden away in the desert, or a jeweled goblet protected by powerful servants.  No, the cup you take in the Holy Sacrament every week is the true Grail, far more real and powerful than any mythical item. It contains the very medicine of immortality, the Blood of Christ.  Thus claim the true Holy Grail for yourself and quest no longer, for you have it here in the Lord’s Supper. For He makes even the most meager table a veritable feast with only the finest bread and wine that no amount of questing can buy.