“Blessed Are Those Who Have Not Seen”

Then, the same day at evening, being the first day of the week, when the doors were shut where the disciples were assembled, for fear of the Jews, Jesus came and stood in the midst, and said to them, “Peace be with you.”  When He had said this, He showed them His hands and His side. Then the disciples were glad when they saw the Lord.  So Jesus said to them again, “Peace to you! As the Father has sent Me, I also send you.”  And when He had said this, He breathed on them, and said to them, “Receive the Holy Spirit.  If you forgive the sins of any, they are forgiven them; if you retain the sins of any, they are retained.”  Now Thomas, called the Twin, one of the twelve, was not with them when Jesus came.  The other disciples therefore said to him, “We have seen the Lord.” So he said to them, “Unless I see in His hands the print of the nails, and put my finger into the print of the nails, and put my hand into His side, I will not believe.”  And after eight days His disciples were again inside, and Thomas with them. Jesus came, the doors being shut, and stood in the midst, and said, “Peace to you!”  Then He said to Thomas, “Reach your finger here, and look at My hands; and reach your hand here, and put it into My side. Do not be unbelieving, but believing.”  And Thomas answered and said to Him, “My Lord and my God!”  Jesus said to him, “Thomas, because you have seen Me, you have believed. Blessed are those who have not seen and yet have believed.”  And truly Jesus did many other signs in the presence of His disciples, which are not written in this book; but these are written that you may believe that Jesus is the Christ, the Son of God, and that believing you may have life in His name. John 20:19-31

He has to be the same Jesus.  No mere metaphorical resurrection whereby he rises in the hearts of the faithful.  No mere spiritual rising that leaves the body dead.  When we Christians confess that Jesus rose from the dead we are talking about a bodily resurrection.  The body that died is the body that rose, as the marks on Jesus’ hands and side showed.

From when Jesus was born until he died he did not, in his human nature, fully use all of the divine powers that his human nature shared.  He humbled himself.  He hid his divinity under his deep humiliation all the way to his death on the cross.  After he died, he left his state of humiliation.  His body is glorified.  He no longer subjects it to any limitations.  The disciples were hiding behind locked doors and Jesus simply appeared.  We may not confine the risen Lord Jesus by our own understanding of the limitations of space.

Jesus is risen and his body is glorified.  It is the same body that was crucified.  Jesus said to Thomas,

Reach your finger here, and look at My hands; and reach your hand here, and put it into My side. Do not be unbelieving, but believing.

In the account that is before us today, Jesus doesn’t speak of baptism or the Lord’s Supper.  He fulfills the promise he gave to Peter about the power of the keys.  He had said to Peter,

After purchasing the keys with his innocent suffering and death, he gave them to all of the disciples.  Rome claims that Jesus was promising to make Peter the first pope by promising him the keys of the kingdom.  But look here at what Jesus said after he died and rose again.  He said:

What are the keys?  The loosing key is the key that forgives the sins of sinners.  The binding key is the key that retains the sins of sinners.  The loosing key forgives sins in Jesus’ name and by Jesus’ authority.  This key opens heaven to faith and permits the believer to enter into eternal life.  Sinners who are sorry for their sins and want forgiveness for their sins should be forgiven.

The authority of the keys is given to the church.  But more than that, when Jesus sent out the apostles he was sending out the church’s first pastors.  Not only has Christ given to his whole church the authority to forgive the sins of repentant sinners and to retain the sins of unrepentant sinners, he has also established in his church an office that exists for the purpose of doing just that.  We call this the pastoral office. 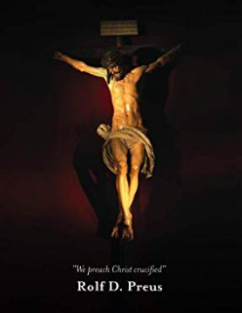 The Bible uses a variety of words to identify the men who serve Christ and his church by publicly administering the keys: ministers, presbyters, bishops, pastors, preachers, and so forth.  The title doesn’t matter.  The duties are what matter.

Christ’s ministers are to preach the law that exposes sins and warns sinners that if they do not repent they will be judged and found guilty and sentenced to death, that is, eternal punishment in hell.  That’s not a particularly enjoyable feature of the ministry, which explains why many preachers refuse to do it.  They fail to preach God’s law and so God’s people fall into all sorts of sins that they sort of, kind of, forgot were sins because their conscience didn’t want to tell them and their pastor didn’t have the guts to tell them.

Cheating, lying, stealing, sexual sins, disobeying parents, despising God’s word, misusing God’s name, and replacing loyalty to God with loyalty to a whole bunch of idols are things that Christians find themselves doing.  Your pastor wasn’t called by God to be a detective, spying out on his parishioners.  But if you are living in sin and you don’t repent, it’s your pastor’s job to tell you that your sins are not forgiven and if you think they are, you are only fooling yourself.

Christ’s ministers are to preach the gospel that forgives sins and promises eternal life to repentant sinners.  The gospel is received through faith alone.  The minister can’t see faith.  Only God can.  The pastor can only go by what he sees and what people say.  If someone confesses his sins, it isn’t up to the pastor to judge his heart and deny that his confession is sincere.

One thing is for sure: if you have a particular sin that you want to confess to God and you want to hear with your own ears that that specific sin is forgiven by God, you may go to God’s servant and ask him to hear your confession and to give you Christ’s absolution.  Not only is it his duty to do so, he may never, under any circumstances, reveal to anyone what has been confessed to him.  He is but the mouthpiece of the Lord Jesus who promised, “If you forgive the sins of any, they are forgiven them.”

Ah, but it’s only words.  Just words spoken by men who aren’t any holier or closer to God than you are.  Just words.  Don’t you believe it!  Jesus told Thomas that those who believe these “just words” are blessed, yes, more blessed than those who put their hands into the scars on Jesus hands and side.  The fact that Jesus rose is not enough.  You need the word of God concerning this living Lord Jesus.  If you are intent on living in sin and refusing to acknowledge it and repent, there is no word of forgiveness for you.  You’re not on your way to heaven.

If your sins distress you, and bring you sorrow, and you want God’s forgiveness for them, you need to hear the gospel.  You need to hear Jesus absolving you.  As surely as he died for you, bore your sins in his body on the cross, and rose from the dead on the third day, the forgiveness his minister speaks to you is as valid and certain as if Jesus spoke it himself.  Listen to the absolution, “I forgive you all your sins in the name of the Father, and of the Son, and of the Holy Spirit.”  Don’t be put off by the fact that a sinner like you is speaking these words.  Instead, take to heart Jesus’ promise, “Blessed are those who have not seen and yet have believed.”