Concerning chastity, it says in Proverbs 19:14, “House and wealth are inherited from fathers, but a prudent wife is from the Lord.” Spouses are a gift of God. Or alternatively, some have a special ability to remain unmarried and yet not burn with lust. This also is a gift from the Lord, as we hear in Matthew 19: the disciples are reflecting on certain advantages of remaining unmarried and Jesus says, “Not everyone can receive this saying, but only those to whom it is given.” The Sixth Commandment protects the gift of chastity, both for the married and the unmarried. For the married, chastity means being faithful to one’s spouse and not seeking others. For the unmarried, chastity means celibacy. The Sixth Commandment protects this chastity by forbidding people to take for themselves those whom God has not given them.

Concerning possessions, we may be inclined to suppose that we determine through our work how much we have. It certainly says in Proverbs 20:4, “The sluggard does not plow in the autumn; he will seek at harvest and have nothing.” God grants us no license to be lazy. However, David prays to the Lord in 1 Chronicles 29, “Both riches and honor come from you, and you rule over all.” And we have this paradox in Proverbs 11:24, “One gives freely, yet grows all the richer; another withholds what he should give, and only suffers want.” Or as we sing in the Magnificat, “he has filled the hungry with good things, and the rich he has sent empty away.” These all show that possessions are a gift of God, not something that we acquire. The Seventh Commandment protects the possessions that God has distributed in his wisdom by forbidding people to take for themselves things that God has not given them.

Now it is the nature of God to be giving and gracious and wise. He is our Father in heaven who has all his creations at his disposal and apportions them according to his good pleasure and our need. God is not a socialist. He’s not interested in everyone having an equal share. One man has a beautiful wife, one man has a homely wife, one man has no wife. One man has millions of dollars, one man has no more than his daily bread. God doesn’t care about appearing “fair” in man’s eyes. He cares about being a good Father. And for this we can be glad. Because God is a good and gracious Father, we can be content with what he has given us, knowing that it is exactly what we need, and more importantly knowing it is from him. Nothing makes chastity or possessions more precious than knowing our Father in heaven is the one who has given them.

Yet it is our nature to be discontent with what God has given us and to think we could distribute things better. We would much rather take than wait for God to give, or be content with what God has already given. Let’s see how that played out with David. He saw Bathsheba and wanted her. He inquired about her and found out, “Is this not Bathsheba, daughter of Eliam, wife of Uriah the Hittite?” She is not available for marriage. She is already married. And she’s certainly not available for the mutual violating of chastity. Yet he took her to himself, and it doesn’t seem that she wanted any different outcome. When she conceived, David didn’t show any remorse for his action. Perhaps he figured he was entitled to her as king, or entitled to her because she consented, or entitled to her simply because he wanted her. Man is very skilled at justifying himself, except that in the end he can never justify himself.

David thought that he had successfully covered up the affair. “But the thing that David had done displeased the Lord.” The Lord sent the prophet Nathan to David to confront him about his sin, and Nathan did so through a parable: “There were two men in a certain city, the one rich and the other poor. The rich man had very many flocks and herds, but the poor man had nothing but one little ewe lamb, which he had bought. And he brought it up, and it grew up with him and with his children. It used to eat of his morsel and drink from his cup and lie in his arms, and it was like a daughter to him. Now there came a traveler to the rich man, and he was unwilling to take one of his own flock or herd to prepare for the guest who had come to him, but he took the poor man’s lamb and prepared it for the man who had come to him.”

It’s an unfortunate flaw of our fallen nature that we’re able to see clearly in situations that don’t involve us but are often blinded by our own desires in the situations that do. Fortunately the Lord provides the preaching of his Word to bring us to our senses. David sees very clearly that the rich man in the parable did wrong. He took from someone else, as if God had not already given him so much. And David pronounces his own sentence, “As the Lord lives, the man who has done this deserves to die, and he shall restore the lamb fourfold, because he did this thing, and because he had no pity.” 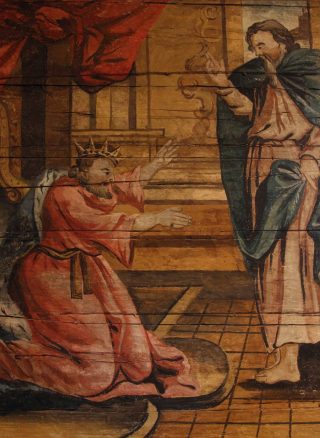 Nathan responds, “You are the man!” and then speaks on behalf of the Lord: “I gave to you your master’s house and your master’s wives into your arms and I gave to you the house of Israel and Judah. And if this were too little, I would add to you as much more.” The Lord’s emphasizes his gracious and giving nature, to which David had become blind until this rebuke. The Lord continues by identifying David’s sin, “Why have you despised the word of the Lord, to do what is evil in my sight? You have struck down Uriah the Hittite with the sword and you have taken his wife to be your wife and have killed him with the sword of the Ammonites. Now therefore the sword shall never depart from your house, because you have despised me and you have taken the wife of Uriah the Hittite to be your wife.” There’s the sin. David took for himself what the Lord had not given. In doing so he despised the Word of the Lord and he despised the Lord himself. And as for the consequence of David’s sin, the Lord is going to teach him who has the right to take and who has the right to give: “I will take your wives before your eyes and I will give them to your neighbor.” This is a just consequence, and useful for man. It is good for us to receive reminders that God is the giver and taker, even if those reminders sting.

We’ve seen that God is a good Father, that he gives graciously, that he justly chastens us for our good when we need correcting. We also see that our Father forgives our trespasses. David has now been brought to a knowledge of his sin and his heart is contrite. As David would later sing in Psalm 51, reflecting on this event, “A broken and contrite heart, O God, you will not despise.” He heard a gracious Word from the Lord: “Nathan said to David, ‘The Lord also has put away your sin; you shall not die. Nevertheless, because by this deed you have utterly scorned the Lord, the child who is born to you shall die.’”

David heard the Absolution. His sin has been forgiven. There will still be consequences. Those don’t negate the forgiveness of sins; that’s important to remember. And while the consequence of David’s sin was hard to bear, the death of his child pointed to God’s greatest gift of all. The Lord said in Ezekiel 18, “The soul who sins shall die. The son shall not suffer for the iniquity of the father, nor the father suffer for the iniquity of the son.” So why did David’s son die for David’s sin? Because the Son of David would die for David’s sin and for the sin of the whole world. Our Lord Jesus Christ is descended from David according to the flesh. And as it says in that very well-known passage of Scripture, “God loved the world so that he gave his only Son.” That’s the sort of giving God you have. Paul expands on this in Romans 8, “He who did not spare his own Son but gave him up for us all, how will he not also with him graciously give us all things?”

Thus we see that in Christ we learn to be content. What more could we want than him? And God has freely given him to us. And he has freely given us himself. If we should lose all we have on earth, nevertheless in Christ we can boldly say with Job, “The Lord gave and the Lord has taken away; blessed be the name of the Lord.” For the Lord will never take himself away from us. He has given himself to us forever. And if we have him, then we can be content with all else, come what may. Amen.