In 1519, Luther published an edited copy of his lectures on Galatians.  This text represented his clearest exposition of the doctrine of justification.  His new colleague, Philip Melanchthon, edited the text and gave Luther the citations of the church fathers.[1] Their collaborative relationship led to Melanchthon’s significant role in explaining and defending the Lutheran doctrine of justification in the future. 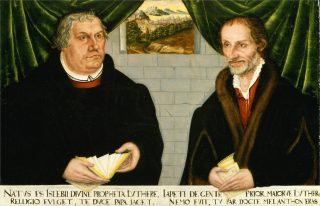 As he had since 1515, Luther delineated between the two means of justification in his exposition of Galatians 2:16.  First, he identified an external manner of righteousness that results from an individual’s own powers and rests on the performance of the Law.  Luther equated this external way to the scholastic teaching on the achievement of righteousness through the dutiful practice of just deeds by obeying the Law.

In contrast to this, sinners receive righteousness the inward way by grace through faith in Christ’s Word.  This begins with the complete hopelessness of one’s own righteousness like the tax collector who prayed humbly for God’s mercy and was justified before God (Luke 18:13-14).  Luther equated this calling upon God with this true, Christian righteousness. Thereby, they become the children of God who gladly do fulfill the Law through faith and love.  Sinners do not become righteous by doing righteous deeds, but rather those who call upon the name of God by faith in Christ fulfill the law of love through the power of God’s Spirit.  Thus, Luther reiterated his rejection of the application of Aristotle’s philosophy of ethics to theological doctrine. Finally, Luther contrasted this proper Christian righteousness with the external, human righteousness as he concluded:

Thus it is clear that Christian righteousness and human righteousness are not only altogether different but are even opposed to each other, because the latter comes from works, while works come from the former. No wonder…that Paul’s theology vanished entirely and could not be understood after Christians began to be instructed by men who declared falsely that Aristotle’s ethics are entirely in accord with the doctrine of Christ and of Paul, by men who failed completely to understand either Aristotle or Christ. For our righteousness looks down from heaven  and descends to us.  But those godless men have presumed to ascend into heaven by means of their righteousness and from there to bring the truth which has arisen among us from the earth.[2]

While he refuted the scholastic theologians’ use of Aristotle’s ethical teaching, Dr. Luther also here reversed the monastic idea of the ascent of the soul to God through prayer and mystical contemplation.  Martin the Observant Augustinian Friar had practiced this type of life for many years.  With the emergence of the proper understanding of justification, Luther inverted the notion of ascent and reoriented the focus toward Christ’s descent through the Incarnation.  Notice how he used a common phrase associated with medieval mysticism, inward way, but reversed its meaning.  For Luther, justification before God no longer depended upon the Christian’s inward striving or outward works, but Christ’s work for the Christian and in the Christian by faith.

While Martin Luther had formulated the theology of justification from 1515 to 1519, he had not faced an ecclesiastical trial for his “false teaching.”  Political circumstances in Europe had distracted his theological enemies and the papacy from Luther’s growing popularity.  In 1520, Pope Leo X condemned many of Luther’s teachings and threatened him with excommunication.  During that year, Luther wrote against papal authority and called upon the German princes to reform their own territories.[3]

Dr. Martin Luther also explained the proper relationship between justification by faith in Christ and the daily life of the Christian.  His Treatise on Good Works explained how pious living actually flows from someone justified by faith alone.  In this work, he also explicitly rejected the scholastic theologians’ notions of the disposition (habitus) to form a perfect faith.  In The Freedom of the Christian, Luther described the origin and nature of faith in Christ and its effects on the believer.  First, the Word of God saves those who receive it by faith alone.  In this manner, God justifies the sinner and unites the Christian to Christ.  Second, true faith in the Gospel liberates the Christian from seeking after outwardly pious acts in order to earn divine favor.[4]

In 1521 Charles V, the Holy Roman Emperor, summoned Martin Luther to testify before the Imperial Diet in Worms.  On April 18, he gave his famous speech before this gathering in which he refused to recant his writings and affirmed his teaching of justification before God by faith alone.  During his journey to Worms, he preached at Erfurt on the first Sunday after Easter.  In this sermon, he emphasized the significance of Christ’s redemptive act through his death and resurrection.  Clearly, he wanted to emphasize faith in Christ as the means by which God grants his righteousness to sinners when he proclaimed:

Our Lord Christ says: I am your justification.  I have destroyed the sins you have upon you.  Therefore, only believe in me; believe that I am he who has done this; then you will be justified…righteousness is identical with faith and comes through faith.[5]

In the same sermon, Luther repeated his refutation of the scholastic teaching of justification and emphasized that true good works follow faith. When Martin Luther departed from Worms as a condemned heretic (a crime in the sixteenth century), his future seemed quite precarious.  However, Dr. Luther had articulated his teaching on justification by faith in Christ clearly before the most powerful secular rulers and church officials of his time.