At Mount Sinai, as recorded in Exodus 20, God himself spoke to the people of Israel, saying, “I am the Lord your God who brought you out of the land of Egypt, out of the house of slaves. You shall have no other gods before me.” The Lord prefaces the First Commandment, and all the commandments, with the Gospel. He is the one who has plagued Satan and his host, who has redeemed us with an outstretched arm, who has promised us an inheritance and given himself to be our God. When we hear the Lord’s preface to the First Commandment and then hear, “You shall have no other gods,” it seems to follow so obviously. Why would I need other gods? This one God is over all and has done everything for me: given me life and breath and redemption, bound himself to me with an oath, provided for all my needs of body and soul. No other gods, indeed! What good would they be? What could they add that is not already ours in the Lord?

And then we come to tonight’s reading. The Lord had summoned Moses onto the mountain, and Moses was on the mountain forty days and forty nights. It says in Exodus 24, “Now the appearance of the glory of the Lord was like a devouring fire on the top of the mountain in the sight of the people of Israel.” The Lord was still very clearly with his people and had not abandoned them. Yet what did we hear? “When the people saw that Moses delayed to come down from the mountain, the people gathered themselves together to Aaron and said to him, ‘Up, make us gods who shall go before us.’”

It is notable that they don’t demand one god, but gods, plural. Polytheism, belief in multiple gods, seems native to our corrupt nature. This is likely due to the devil’s initial temptation, “Ye shall be as gods,” which was the first suggestion that there could be more than one deity. Man acted on that temptation, and has been inclined toward faith in multiple gods ever since.

Over the course of human history this has often manifested itself in various pantheons, that is, various sets of gods. But I caution you not to think of polytheism as some quaint doctrine of the ancient Greeks, Egyptians, Romans, Canaanites, Norsemen, and so forth. This inclination toward other gods, plural, infects all human hearts. In our day, pagans often trust some combination of mammon, good works, science, and luck. For Christians, it’s more often a trust in God AND. God AND money. God AND my mostly moral life. God AND fate. God AND my own powers and abilities. For God’s people, the blasphemous pantheon includes the Lord, but as one among others. So we heard that after Aaron made the golden calf, he proclaimed, “Tomorrow shall be a feast” – to whom? – “to the Lord.” “See, we still have the Lord,” the people could say. “We’ve merely supplemented and filled in some gaps.” 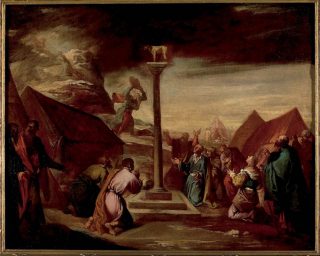 How quickly we forget that the Lord is the only God we need. He is the Lord our God who brought us out of the domain of darkness, out of the house of slaves. We shall have no other gods, because we don’t need any other gods. But what is the consequence when people break the First Commandment? The Lord spells it out in the First Commandment itself: “You shall have no other gods before me,” that is, “You shall have no other gods in front of my face.” The consequence for having other gods is that the Lord turns away his face, or consumes people from before his face, or sends people away from his face, as we see throughout the Scriptures, and as the Lord intended in tonight’s reading. When we hear the Lord’s verdict against Israel’s idolatry, we hear his judgment against us as well: “Let me alone, that my wrath may burn hot against them and I may consume them.”

But then “Moses implored the Lord his God.” Notice, he didn’t argue that the Lord had misjudged the people. They really had turned aside quickly. Nor does Moses argue that the punishment is too severe. We deserve no less than what the Lord has threatened. To what, then, can Moses appeal? To several things, and they’re the same sorts of things to which Christ appeals on your behalf when you have committed idolatry.

First, Moses appeals to the exodus, “O Lord, why does your wrath burn hot against your people whom you have brought out of the land of Egypt with great power and with a mighty hand?” The Lord delivered his people. No one made him do it. He chose to do it, and he chose to take the people as his own. Likewise Christ has come in the flesh, borne your sin, crucified it in his own body on the cross, and left it for dead, while he rose from death. The Lord has baptized you and said in Isaiah 43, “Fear not, for I have redeemed you; I have called you by name, you are mine.” And the name by which he has called you is his own. You have been baptized in the name of the Father and of the Son and of the Holy Spirit. Thus Jesus intercedes, “Dear Father, do not be angry with them, not after we took such pains to deliver them and have taken them to be our own.” And the Father is pleased to grant such a petition for the sake of his Son.

Second, Moses appeals to the Lord’s reputation, “Why should the Egyptians say, ‘With evil intent did he bring them out, to kill them in the mountains and to consume them from the face of the earth’?” The Lord has concern for his name and reputation, that his name be hallowed on the earth. And so Christ prays, “Father, do not destroy them, lest the devil have reason to boast against us, saying, ‘He only saved them so that he could do them harm.’” And the Father is pleased to grant this petition as well for the sake of his Son.

Third, Moses appeals to the Lord’s promises, “Remember Abraham, Isaac, and Israel, your servants, to whom you swore by your own self, and said to them, ‘I will multiply your offspring as the stars of heaven.’” So Christ appeals to the Lord’s promises on our behalf, “Father, we have sworn to do our Christians good and not harm, so let us be gracious to them and forgive their sin.” Again, the Father grants this petition for the sake of his Son.

Now I don’t want to give the impression that God the Father is an angry god of justice and Jesus his Son is some other god of grace, and the two balance each other out like yin and yang. The Father and Son are one, and also the Holy Spirit. The Father, Son, and Holy Spirit desire the same things; their will is one. So the point of these prayers of intercession on our behalf is not to say that God is changeable or at odds with himself, but to show that our entire hope for life and salvation rests in the Lord alone. Apart from God himself taking up our cause, what can we plead but guilty? But Jesus has done as Moses did and said, “Blot me out of your book, that they may have forgiveness.” Jesus died on the cross and suffered for man’s idolatry, and at the same time showed just how great a God the true God is. He holds nothing back, but gives himself to us fully, even his very life for ours.

“I am the Lord your God,” Jesus says, “who brought you out of the devil’s kingdom, out of the house of slaves. You shall have no other gods.” And we say, “Amen, God help us, for why would we need any other gods than you?” To the only true God, the Father, Son, and Holy Spirit, be praise and thanks, now and forever. Amen.