Our forefather Job asked the Lord in the midst of his suffering, “How many are my iniquities and my sins? Make me know my transgression and my sin” (Job 13:23). This seems like a dangerous question and request. Don’t we know enough of our sins without seeking to know more of them? What would we learn about ourselves if the Lord made us know our transgression and sin? Certainly there is more to know, more than we can fathom. David prays in Psalm 19, “Who can discern his errors? Declare me innocent from hidden faults.” The Apostle Paul says in 1 Corinthians 4, “I am not aware of anything against myself, but I am not thereby acquitted.” The prophet Jeremiah speaks the Word of the Lord, “The heart is deceitful above all things and desperately sick; who can know it?” From such passages we learn that we only know some of our sins. Indeed, we cannot fully grasp the depth of our depravity. We have a load of iniquity of which we are not even aware.

Now one might ask, “Why would I want to know it? I’ll simply pray like David, ‘Declare me innocent from hidden faults,’ and leave it at that. I’ll pray the Fifth Petition of the Lord’s Prayer in which we plead guilty of all sins, even those we are not aware of. Ignorance is bliss.” It is good generally to confess that you’re a sinner, and it is perhaps understandable on a human level that we wouldn’t want to feel the pain of knowing just how bad we are. But we must pray with Job, “How many are my iniquities and my sins? Make me know my transgression and my sin.”

Why must we pray this? Because it is all too easy to let our confession of sin turn into the gentle sentiment which states, “No one’s perfect.” The world readily grants this. Saying that no one’s perfect may confess that we’re all in the same boat, and none of us lives up to his own ideal. But if our confession of sin becomes nothing more than that, it will leads to two dire consequences for Christians.

First, when we do not purposefully examine ourselves according to God’s Law, we end up with an inaccurate picture of ourselves. This is dangerous business, and can lead into outright unbelief from which we would need to be reconverted. David, for instance, in the midst of his affair with Bathsheba, was not judging himself by God’s Law, but by what he could or couldn’t get away with. Once he had sufficiently covered things up in the eyes of man, he supposed that he had nothing further to worry about. He thought he was righteous when he was not.

And this is where an inaccurate picture of ourselves will always lead us: into self-righteousness. We may then be free from pangs of conscience, but we would not be free from the pangs of hell. It is far better that we hear God’s judgment against our sin now while there is time to repent than to hear his judgment on the Last Day when the door has been shut. Thanks be to God, he sent Nathan the prophet to David to preach the Law to him and confront him with his sin. It was through that Law that David regained an accurate picture of himself, saw his unrighteousness, and recognized his need for salvation. May the Lord show such love to us as well.

Second, when we purposefully remain ignorant of our sins by gazing into the Law of God as little as possible, we also devalue Christ. He who is forgiven much loves much, and he who is forgiven little loves little. Everyone has much to be forgiven, it’s merely a question of whether we recognize it or not. If we think we’re not that sick, we won’t be very diligent in seeking a cure. If my sins aren’t bothering me, and I reason that I should let sleeping dogs lie, what importance will I place on coming to church to hear the Gospel and receive the Sacrament? He who will not feel his wounds will learn to scorn the wounds of Christ. But he who will feel his wounds will sing for joy in Christ, as David does in Psalm 103, “Bless the Lord, O my soul, and all that is within me, bless his holy name! Bless the Lord, O my soul, and forget not all his benefits, who forgives all your iniquity, who heals all your diseases, who redeems your life from the pit, who crowns you with steadfast love and mercy.”

You see that there is much danger to be avoided by praying with Job, “How many are my iniquities and my sins? Make me know my transgression and my sin.” But someone might say, “If I stare deeply into the mirror of God’s Law, I’m not going to like what I see. Not only is it going to cause me pain when I realize how grievously I have offended against God, but I have a suspicion that my condition is so horribly beyond cure that I would lose all hope of salvation.”

It is true that our condition is a miserable one. Even a quick glance at the Ten Commandments reveals this. Going in order, you see that your heart has trusted things that are not God and doubted the love of him who died for you. You have neglected prayer and been thankless after receiving God’s good gifts. You have regarded God’s Word with less interest than you pay to your favorite book or show. You have dishonored those whom God has placed in authority over you. You have been angry and had bloody thoughts against those who have wronged you. You have regarded marriage according to its troubles instead of according to God’s institution, and have desired those whom God has not given you. You have not been content with the possessions that God has given you. You have delighted in hearing bad things about others and spread gossip. You have craved things that belong to other people as if God didn’t know how to take care of you. 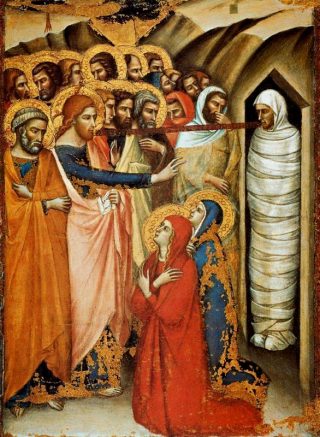 And so we lament with Saint Paul, “Who will deliver me from this body of death?” but we confidently confess with him as well, “Thanks be to God through Jesus Christ our Lord!” We may be wretched, so wretched that we are like Lazarus shut up stinking in the tomb, who cannot even weep over his own sins rightly but only reap the wages of sin which is death. We may be wretched and entombed, but Jesus comes to our tomb, and weeps for us, and breaks the doors of death with his death, and resurrects us with the call of his resurrected voice. “Live!” he says, “I forgive you all your sins. Come forth!” And he removes the bandages, and your flesh is clean, and the stink is gone, and you are alive in him.

So do not fear to pray, “How many are my iniquities and my sins? Make me know my transgression and my sin.” During the season of Lent we will study the Ten Commandments, and this prayer will be answered. But Lent will not end in despair, rather, we will come to Christ the mercy seat, to the grace of God hanging on the cross, to whom be glory and honor forever. Amen.

Let us ask, brothers, that we be told how great are our iniquities and sins, and let us desire that our crimes and offenses be shown to us. Let us search our ways and with earnest attention examine all our pursuits and dangers. Let everyone say in his anxiety: ‘I will go to the gates of hell,’ so that now we may take courage in no other way than in God’s mercy alone. (Bernard of Clairvaux, quoted in Apol. XII.58)