“The Power of God’s Word”

And when a great multitude had gathered, and they had come to Him from every city, He spoke by a parable: “A sower went out to sow his seed. And as he sowed, some fell by the wayside; and it was trampled down, and the birds of the air devoured it.  Some fell on rock; and as soon as it sprang up, it withered away because it lacked moisture.  And some fell among thorns, and the thorns sprang up with it and choked it. But others fell on good ground, sprang up, and yielded a crop a hundredfold.”  When He had said these things He cried, “He who has ears to hear, let him hear!” Then His disciples asked Him, saying, “What does this parable mean?” And He said, “To you it has been given to know the mysteries of the kingdom of God, but to the rest it is given in parables, that ‘Seeing they may not see, and hearing they may not understand.’ Now the parable is this: The seed is the word of God.  Those by the wayside are the ones who hear; then the devil comes and takes away the word out of their hearts, lest they should believe and be saved.  But the ones on the rock are those who, when they hear, receive the word with joy; and these have no root, who believe for a while and in time of temptation fall away.  Now the ones that fell among thorns are those who, when they have heard, go out and are choked with cares, riches, and pleasures of life, and bring no fruit to maturity.  But the ones that fell on the good ground are those who, having heard the word with a noble and good heart, keep it and bear fruit with patience.” 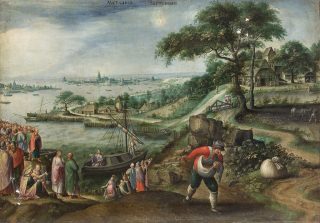 The topic today is the power of God’s word.  The same seed was sown on the wayside, on the rocky ground, among the thorns, and on the good ground.  Only the seed that fell on the good ground produced fruit to maturity.  There was nothing wrong with the seed that fell on the wayside, the rocky soil, or among the thorns.  The seed was just fine.  It was the soil.

God’s word is inherently powerful.  Nothing has to be added to God’s word to make it effective.  The preacher doesn’t need some kind of anointing from the Holy Spirit.  The people don’t need to be brought into the right mood or emotional state.  Psychological or emotional manipulation cannot help God’s word achieve what God wants it to achieve.  It is God’s word.  It is God talking.  God does what God does without any help from religious people with religious imaginations.

For as the rain comes down, and the snow from heaven, and do not return there, but water the earth, and make it bring forth and bud, that it may give seed to the sower and bread to the eater, so shall My word be that goes forth from My mouth; It shall not return to Me void, but it shall accomplish what I please, and it shall prosper in the thing for which I sent it.  Isaiah 55:10-11

God’s word will accomplish what God pleases.  It will prosper in the thing for which God sends it.  God’s word is inherently powerful.

Why do some believe while others don’t?  Why do some hear it, pay no attention to it, and watch as the devil falsifies it in their mind, convincing them it’s just a lot of useless vapor, suitable for nothing useful at all?  And why do some people hear it, love it, rejoice in it, take it in enthusiastically, and as soon as their faith is put to the test they abandon it, dropping it as if it were a hot coal in their hands?  And why do some people hear it, believe it, hold onto it in sincere faith, and then as the cares, riches, and pleasures of life assume their attention and concern, their faith in God’s word is slowly choked until it dies?  The reason why is the devil, the world, and our sinful flesh.

The devil is represented by the seed on the pathway where the birds of the air snatch it off the ground.  The world is the rocky soil where the plant shoots up and dies.  Our sinful flesh is the thorns that choke the plant to death.

Those who dismiss God’s word as useless and of no benefit to them are those of whom Jesus is speaking when he says: “Seeing they may not see, and hearing they may not understand.”  God spoke through Isaiah:

The Bible says that God wants all people to be saved and to come to the knowledge of the truth.  The Bible also teaches that God punishes unbelief with more unbelief.  Think about what it takes to make good soil good soil.  It must be plowed.  It must be cut open.  The plow digs down.  It breaks.  The land feels no pain.  But our hearts do.  Our feelings are hurt.

That’s the seed implanted in our hearts by the devil.  It is the standard he proposed to Adam and Eve in Paradise and, by winning their hearts to his lie, led them and their descendants into sin and death.  His question, “Did God really say?” remains.  He asks.  We listen to his question.  We question God’s word.  And so the soil hardens and the seed is left on the path where the birds of the air see it and eat it.

The rocky soil that keeps the root from growing and the thorny ground where the young plant is choked are also the result of the lie implied in the question: “Did God really say?”

Nobody ever became a Christian by the preaching of the law.  The law kills.  It cannot give life.  But when God’s law is silenced, when right and wrong are no longer right and wrong, the plow is dulled into uselessness.  Unless we understand how we have failed to love God above all things and how we have failed to love our neighbors as ourselves, and not just as some sort of an abstract theological construct to which we nod our heads, but really, and truly, by what we said, what we did, what we failed to do, we won’t receive the gospel of the forgiveness of sins for Christ’s sake.  We won’t believe it.  We won’t be rooted in God’s word and we won’t produce any fruit at all.

We must be rendered helpless.  We must be utterly weak or Christ’s power won’t rest upon us.  We must know that when we failed to do what we promised to do, when we lusted after what wasn’t ours, when we cheated, lied, broke faith, and disobeyed we embraced the religion of the father of lies who said and still says, “Did God really say?”  The devil is bound, but only by the gospel.  Where the pure word of God does not hold sway, the devil is in charge.

He is allied with this world.  The Bible calls him the prince or ruler of this world.  He blinds the eyes of the influential.  My son Peter is talking a class at the University of Wyoming on the Bible and archeology.  Naturally, the professor is a Bible doubter who thinks the ancient Hebrews borrowed their religion from their heathen neighbors.  Were he a Bible believing Christian, he wouldn’t be hired to teach at the university.  University professors regularly attack the veracity of the Holy Scriptures.  So called biblical scholars who deny that the Bible is God’s word teach in universities and seminaries around the world, peddling their fanciful theories that attack the reliability of the Bible as if it is sound, biblical scholarship.  Bible believing scholars need not apply.  Young people, tested by this challenge to their faith, enamored with their Bible doubting professors, wanting the approval of the in-crowd, fail the test.  The faith that seemed so vibrant is put to the test and it fails the test.  It had no root.

Satan is also allied with our own sinful flesh.  He understands sin.  He should.  He’s the author of it.  He knows what we care about.  He knows what we treasure.  He knows what gives us pleasure.  He will spur our sinful nature to grasp as precious the junk treasures of this world, to worry about things that God has promised to provide, and to seek pleasure in sins that will only bring us pain, bitterness, and emptiness in the end.

The devil falsifies God’s word.  The world tempts us to deny it.  Our sinful flesh chokes it by replacing it with the cares, riches, and pleasures of life.  The devil, the world, and our flesh are powerful enemies.  But they are not almighty.  God’s word is.  God is and God joins himself to his word.

From the word!  When our hearts are cut by God’s law and we see our weakness, spiritual poverty, and rebellion, we cry out to God for help.  We want to be strong.  We want to be good, strong Christians!  Jesus says, “My grace is sufficient for you, for my strength is made perfect in weakness.”  We must be weak.  Then we are strong.  The crucifixion of the Son of God appears as weakness.  The good is defeated by the bad.  The holy is shamed by the sinful.  The humble is debased by the proud.  That’s what appears to be.

But that’s not what is.  When Jesus suffered and died for us, God’s strength, his goodness, his victory, and his true glory were revealed.  There we are washed clean of all our sin, our sin is replaced by his righteousness, our shame is removed, and we are exalted up to heaven.  This is what the word, sown into our hearts, tells us.  Day after day, week after week, year after year, until we die and face our Maker, God’s word sustains us in the true faith.  From this faith in God’s love, we are born again to love.  Since Christ has borne our sins, we can bear the sins of those with whom we live.  Since God is patient with us, we can be patient with our brothers and sisters.  Since we are forgiven by God’s grace, through the blood shed by his Son, we can put the sins of others under the same blood and forgive as we have been forgiven.  This is how we keep God’s word and bear fruit with patience.