“Daily in this world we live with murder, lying, betrayal, stealing, robbing, and all manner of shameful evil, depravity, and vexation, so that literally no one’s life or 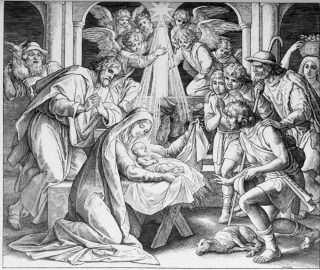 Dr. Martin Luther described the sinful condition of the world in stark terms.  This might seem strange for a sermon on Luke 2:10-12, but he wanted to emphasize the dire conditions of the world into which the angels announced Christ’s birth.  He described how sin has made humanity the devil’s tool.  As a result, God’s anger and eternal death threaten all human beings.  However, this fact makes Christ’s birth as the Savior even more significant.  The message of the angels reorients the focus of their hearers to the Christ-child who is born to be the Savior of the world.  While the devil may oppress human beings and cause great evil in the world, God becomes a human being and is born to be a Savior.  Luther explained the Incarnation in this manner:

“God thus had drawn much closer to us and entered more deeply into our condemned and troubled nature than the devil could.  He can possess and torture a person but cannot personally become a human being, as, conversely, a human being cannot become a devil.  The two natures remain distinct not only in essence but in person. But with the Son of God the two are one; he has our flesh and blood, born of the virgin Mary, true, natural man like you and me, except that he was conceived of the Holy Ghost without male semen, and did not partake of the devil’s poison, sin and death, but possessed a completely pure, guiltless body and blood.” [Ibid., 112.] {Emphasis added}

This is the message the angels proclaimed not only to the shepherds in the field, but even to the entire world.  God wants all to believe in the Christ-child as their Savior from the sin.  Only Christ the Lord at His Birth forgives the sins of believers and brings them joy.  Thereby, believers should begin to love their neighbor as Christ has done for them.