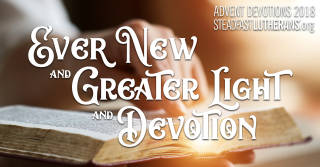 Last week we examined the Ten Commandments in light of the Advent of Christ. We know something of the Ten Commandments by nature, but we can know nothing of Christ or his work by nature. God’s Law is written on the heart of man, but Christ’s fulfillment of it is not. In fact, man does not naturally know any part of the Creed, except perhaps that some powerful God or gods created the world, as Paul writes in Romans 1 that God’s “invisible attributes, namely, his eternal power and divine nature, have been clearly perceived, ever since the creation of the world, in the things that have been made.” But that vague notion of creation is not nearly enough to bring us to a right knowledge of God.

These very titles Prophet and Apostle focus our attention toward a certain point in history when it comes to God’s revelation of himself. The title Prophet means “foreteller,” that is, someone who speaks of something before it happens. The title Apostle means “sent one,” that is, someone who goes forth from another. The title Prophet is characteristic of the Old Testament; the title Apostle is characteristic of the New. The prophets anticipated someone; the apostles went forth from someone. When we identify that “someone,” we will find God’s ultimate revelation of himself, and therefore when we find that “someone,” we will find the core of the Creed.

To be clear, it’s not that the saints of the Old Testament believed in a different God. They confessed the Trinity. They confessed that a promised Savior was coming. They even knew certain details, such as the fact that the Lord himself would be born of a woman without the participation of a man. They knew that the Savior would be born of the house of David, that he would suffer for sins and die and rise from the dead.

Yet for them this was unfulfilled. The saints of the Old Testament did not know that God’s Son would be called Jesus. They could not say, “born of the Virgin Mary, suffered under Pontius Pilate.” They simply knew such details and history were forthcoming, and they longed for the Advent of Christ.

On one occasion Jesus said to his apostles, “Blessed are the eyes that see what you see! For I tell you that many prophets and kings desired to see what you see, and did not see it, and to hear what you hear, and did not hear it” (Lk. 10:23-24). And through the accounts of the Gospel written by these apostles, our eyes see what they saw and hear what they heard, namely the full revelation of God in Jesus Christ.

It is for good reason that the Second Article of the Creed is the longest. It’s not that the Father is of less importance, by no means. Rather, it is honor and glory for the Father that the article about his Son is lengthy, since Jesus has said in John 14:9, “Whoever has seen me has seen the Father.” And concerning his crucifixion Jesus prayed in John 17, “Father, the hour has come; glorify your Son that the Son may glorify you.” As Jesus hung on the cross he glorified and revealed the Father.

Luther comments on this in the Large Catechism, “…we could never come to recognize the Father’s favor and grace were it not for the Lord Christ, who is a mirror of the Father’s heart. Apart from him we see nothing but an angry and terrible judge” (LC, II.65). It is through Christ, and only through Christ, that we have come to know God as Father. Indeed, it is only through Christ that we can confess the Father’s almighty power in the First Article of the Creed and think of it as a good thing.

And so, if you’re ever wondering where you should look when we confess the Creed in church, my recommendation is to look at the crucifix during all three articles of the Creed. Through the Son you know the Father, and in the Son you find the object of the Holy Spirit’s preaching.

Thus we see that the Apostle’s Creed has everything to do with the Advent of Christ, not only the Second Article, but all three articles. Thanks be to God for his divine revelation in Christ and his continued divine revelation through the Scriptures that proclaim Christ. What would we be without this revelation? There’s a question worth considering for a moment as we conclude our meditation on the Creed.

Without God’s revelation of himself we would be idolaters, worshiping wood and stone, permanently dead in our sins, “having no hope and without God in the world,” as Paul writes in Ephesians 2:12. We would invent pantheons of gods who would be even worse beings than we are. And then we could never expect grace from them, but could only imagine that we must pacify them with sacrifices, or that they were too wrapped up in their own activities to bother about us at all. In short, without God’s revelation we would be left groping around in the dark and would inevitably fall headlong into the pit of hell.