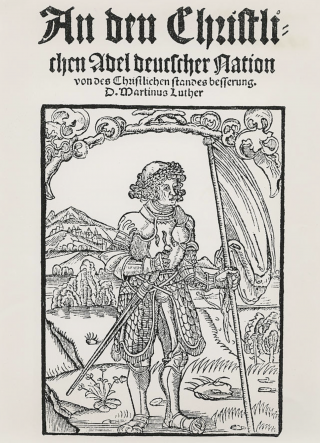 1] Of Civil Affairs they teach that lawful civil ordinances are good works of God, and that 2] it is right for Christians to bear civil office, to sit as judges, to judge matters by the Imperial and other existing laws, to award just punishments, to engage in just wars, to serve as soldiers, to make legal contracts, to hold property, to make oath when required by the magistrates, to marry a wife, to be given in marriage.

Since the government is from God, Christians may participate in government.  They may be soldiers, jurors, magistrates, mayors, princes, police, etc.  Christians also may take oaths given by the government and be bound by legal contracts including marriage (Romans 13, 1 Corinthians 7:1-5).

3] They condemn the Anabaptists who forbid these civil offices to Christians.

4] They condemn also those who do not place evangelical perfection in the fear of God and in faith, but in forsaking civil offices, for 5] the Gospel teaches an eternal righteousness of the heart. Meanwhile, it does not destroy the State or the family, but very much requires that they be preserved as ordinances of God, and that charity be practiced in such 6] ordinances. Therefore, Christians are necessarily bound to obey their own magistrates 7] and laws save only when commanded to sin; for then they ought to obey God rather than men. Acts 5:29.

The Anabaptists hold that one cannot be a Christian and be in political office—that participating in politics is a sin, as is soldiering and capital punishment.  Others say that in order to be perfect in this life one cannot participate in politics.  They essentially tell you to be a monk (or to be like one) to reach perfection.  This is clearly false. Eschewing civil works does not justify any more than doing works justifies. Instead it is Christ and His work that justifies (Romans 10)

Further, government and the civil state are very good things.  After all, the 4th Commandment sets all of that in order based on the authority of parents.  Government and family are given for our good. As such we are to obey the law, even if it does not make sense.  The only time a Christian is permitted to violate the civil law is when it forces the Christian to sin (Acts 5:12-42).

The Confutation agrees with this article.  Melancthon spends some more time in the Apology defending the Lutherans in order to create separation from the Anabaptists who the Reformers were lumped in with.  The Apology reads as follows:

53] The Sixteenth Article the adversaries receive without any exception, in which we have confessed that it is lawful for the Christian to bear civil office, sit in judgment, determine matters by the imperial laws, and other laws in present force, appoint just punishments, engage in just wars, act as a soldier, make legal contracts, hold property, take an oath, when magistrates require it, contract marriage; finally, that legitimate civil ordinances are good creatures of God and divine ordinances, which a Christian can use with safety. 54] This entire topic concerning the distinction between the kingdom of Christ and a political kingdom has been explained to advantage [to the remarkably great consolation of many consciences] in the literature of our writers, [namely] that the kingdom of Christ is spiritual [inasmuch as Christ governs by the Word and by preaching], to wit, beginning in the heart the knowledge of God, the fear of God and faith, eternal righteousness, and eternal life; meanwhile it permits us outwardly to use legitimate political ordinances of every nation in which we live, just as it permits us to use medicine or 55] the art of building, or food, drink, air. Neither does the Gospel bring new laws concerning the civil state, but commands that we obey present laws, whether they have been framed by heathen or by others, and that in this obedience we should exercise love. For Carlstadt was insane in imposing upon us the judicial laws of Moses. 56] Concerning these subjects, our theologians have written more fully, because the monks diffused many pernicious opinions in the Church. They called a community of property the polity of the Gospel; they said that not to hold property, not to vindicate one’s self at law [not to have wife and child], were evangelical counsels. These opinions greatly obscure the Gospel and the spiritual kingdom [so that it was not understood at all what the Christian or spiritual kingdom of Christ is; they concocted the secular kingdom with the spiritual, whence much trouble and seditions, harmful teaching resulted], and are dangerous to the commonwealth. 57] For the Gospel does not destroy the State or the family [buying, selling, and other civil regulations], but much rather approves them, and bids us obey them as a divine ordinance, not only on account of punishment, but also on account of conscience.

58] Julian the Apostate, Celsus, and very many others made the objection to Christians that the Gospel would rend asunder states, because it prohibited legal redress, and taught certain other things not at all suited to political association. And these questions wonderfully exercised Origen, Nazianzen, and others, although, indeed, they can be most readily explained, if we keep in mind the fact that the Gospel does not introduce laws concerning the civil state, but is the remission of sins and the beginning of a new life in the hearts of believers; besides, it not only approves outward governments, but subjects us to them, Rom. 13:1, just as we have been necessarily placed under the laws of seasons, the changes of winter and summer, as divine ordinances. [This is no obstacle to the spiritual kingdom.] 59] The Gospel forbids private redress [in order that no one should interfere with the office of the magistrate], and Christ inculcates this so frequently with the design that the apostles should not think that they ought to seize the governments from those who held otherwise, just as the Jews dreamed concerning the kingdom of the Messiah, but that they might know they ought to teach concerning the spiritual kingdom that it does not change the civil state. Therefore private redress is prohibited not by advice, but by a command, Matt. 5:39; Rom. 12:19. Public redress, which is made through the office of the magistrate, is not advised against, but is commanded, and is a work of God, according to Paul, Rom. 13:1 sqq. Now the different kinds of public redress are legal decisions, 60] capital punishment, wars, military service. It is manifest how incorrectly many writers have judged concerning these matters [some teachers have taught such pernicious errors that nearly all princes, lords, knights, servants regarded their proper estate as secular, ungodly, and damnable, etc. Nor can it be fully expressed in words what an unspeakable peril and damage has resulted from this to souls and consciences], because they were in the error that the Gospel is an external, new, and monastic form of government, and did not see that the Gospel brings eternal righteousness to hearts [teaches how a person is redeemed, before God and in his conscience, from sin, hell, and the devil], while it outwardly approves the civil state.

61] It is also a most vain delusion that it is Christian perfection not to hold property. For Christian perfection consists not in the contempt of civil ordinances, but in dispositions of the heart, in great fear of God, in great faith, just as Abraham, David, Daniel, even in great wealth and while exercising civil power, were no less 62] perfect than any hermits. But the monks [especially the Barefoot monks] have spread this outward hypocrisy before the eyes of men, so that it could not be seen in what things true perfection exists. With what praises have they brought forward this communion of property, as though it were 63] evangelical! But these praises have the greatest danger, especially since they differ much from the Scriptures. For Scripture does not command that property be common, but the Law of the Decalog, when it says, Ex. 20:15: Thou shalt not steal, distinguishes rights of ownership, and commands each one to hold what is his own. Wyclif manifestly was raging when he said that priests were not allowed to hold property. 64] There are infinite discussions concerning contracts, in reference to which good consciences can never be satisfied unless they know the rule that it is lawful for a Christian to make use of civil ordinances and laws. This rule protects consciences when it teaches that contracts are lawful before God just to the extent that the magistrates or laws approve them.

65] This entire topic concerning civil affairs has been so clearly set forth by our theologians that very many good men occupied in the state and in business have declared that they have been greatly benefited, who before, troubled by the opinion of the monks, were in doubt as to whether the Gospel allowed these civil offices and business. Accordingly, we have recounted these things in order that those without also may understand that by the kind of doctrine which we follow, the authority of magistrates and the dignity of all civil ordinances are not undermined, but are all the more strengthened [and that it is only this doctrine which gives true instruction as to how eminently glorious an office, full of good Christian works, the office of rulers is]. The importance of these matters was greatly obscured previously by those silly monastic opinions, which far preferred the hypocrisy of poverty and humility to the state and the family, although these have God’s command, while this Platonic communion [monasticism] has not God’s command.

We are permitted to hold civil office and own property.  Forced socialism and communism is actually contrary to God’s will.  The right to hold property is given to us in the Seventh Commandment.  Those who wish to live in a communistic fashion are free to do so but cannot force it on anyone, as personal property is a natural right.

1 Before You, Lord, we bow,
Our God who reigns above
And rules the world below,
Boundless in pow’r and love.
Our thanks we bring
In joy and praise,
Our hearts we raise
To You, our King!

2 The nation You have blest
May well Your love declare,
From foes and fears at rest,
Protected by Your care.
For this bright day,
For this fair land–
Gifts of Your hand–
Our thanks we pay.

3 May ev’ry mountain height,
Each vale and forest green,
Shine in Your Word’s pure light,
And its rich fruits be seen!
May ev’ry tongue
Be tuned to praise
And join to raise
A grateful song.

4 Earth, hear your Maker’s voice;
Your great Redeemer own;
Believe, obey, rejoice,
And worship Him alone.
Cast down your pride,
Your sin deplore,
And bow before
The Crucified.

5 And when in pow’r He comes,
Oh, may our native land
From all its rending tombs
Send forth a glorious band,
A countless throng,
With joy to sing
To heav’n’s high King
Salvation’s song!