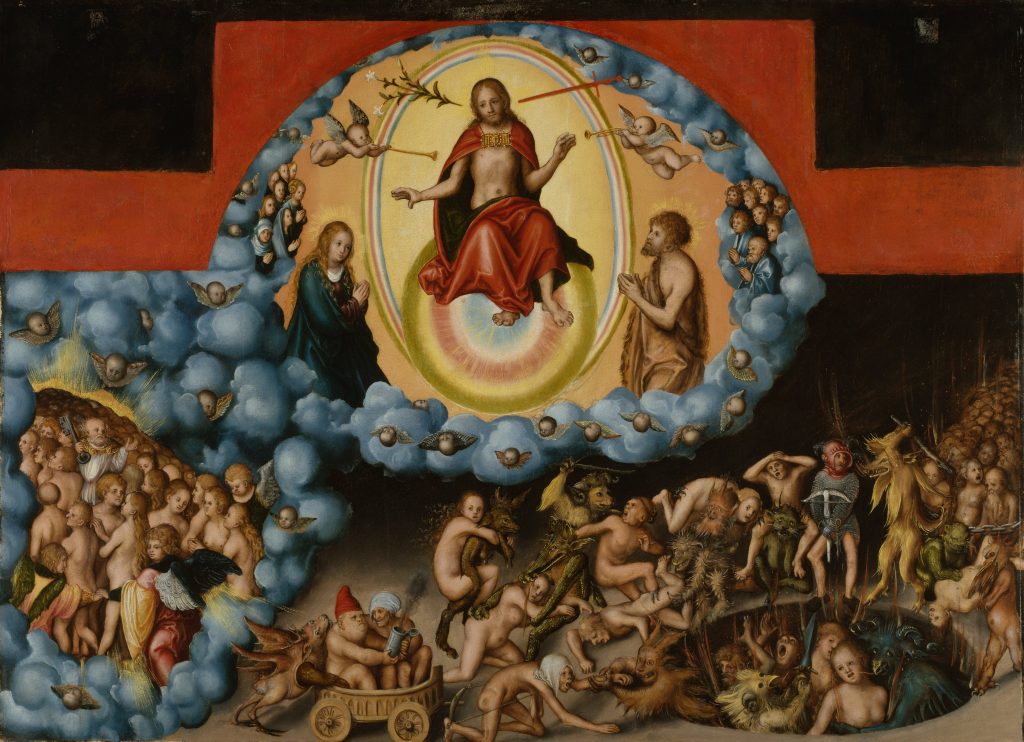 1] Also they teach that at the Consummation of the World Christ will appear for judgment, and 2] will raise up all the dead; He will give to the godly and elect eternal life and everlasting joys, 3] but ungodly men andt he devils He will condemn to be tormented without end.

Those whose names are not written in the Book of Life are judged by their works; however, lacking faith, they have thus done no good works since that which does not proceed from faith is sin (Romans 14:23) and without faith it is impossible to please God, for whoever would draw near to him must believe that he exists and that he rewards those who seek him (Hebrews 11:6). Having no good works, their lack of love is revealed to all. Guilty of unbelief, they are cast into the lake of fire prepared for the devil and his angels (cf. Matthew 25:41) for their lack of love to God and neighbor.

Those who names are written in the Book of Life are judged by their works, and, having proceeded from faith, their good and God-pleasing works are seen by all. These, Christians, are given rewards in the resurrection for their good deeds in this life. We do not know what those rewards are, but we do know that all those whose names are written in the Book of Life will be brought into the New Heaven and New Earth to live forever with Christ (Revelation 21-22).  We pray for this to happen when we pray the Second Petition of the Lord’s Prayer “Thy Kingdom Come”.

4] They condemn the Anabaptists, who think that there will be an end to the punishments of condemned men and devils.

5] They condemn also others who are now spreading certain Jewish opinions, that before the resurrection of the dead the godly shall take possession of the kingdom of the world, the ungodly being everywhere suppressed.

There are some who say that Hell is not forever but rather those who are in Hell will eventually be released.  The Anabaptists confess this as do some other sects. Scripture is abundantly clear: damnation is permanent, just as our salvation is permanent.  Once the Judgement Day comes there is no going back.  We rightly condemn those who preach that Hell is temporary.

Likewise, we condemn those who think that there will be a godly temporal kingdom here on Earth prior to the Judgement Day.  Zionists believe this, as do Dispensationalists and Millennialists.  Lutherans are amillennial.  We believe, teach, and confess that Revelation is figurative, apocalyptic literature.  It is not written to be read literally. We have clear Scripture that teaches that Christ will come in a moment, in a twinkling of an eye.  The end will be sudden and unexpected as we see in 1 Thessalonians and the Gospels. We cannot predict it.  The Confutation agrees completely with this article.

1 The day is surely drawing near
When Jesus, God’s anointed,
In all His power shall appear
As judge whom God appointed.
Then fright shall banish idle mirth,
And flames on flames shall ravage earth
As Scripture long has warned us.

2 The final trumpet then shall sound
And all the earth be shaken,
And all who rest beneath the ground
Shall from their sleep awaken.
But all who live will in that hour,
By God’s almighty, boundless pow’r,
Be changed at His commanding.

3 The books are opened then to all,
A record truly telling
What each has done, both great and small,
When he on earth was dwelling,
And ev’ry heart be clearly seen,
And all be known as they have been
In thoughts and words and actions.

4 Then woe to those who scorned the Lord
And sought but carnal pleasures,
Who here despised His precious Word
And loved their earthly treasures!
With shame and trembling they will stand
And at the judge’s stern command
To Satan be delivered.

5 My Savior paid the debt I owe
And for my sin was smitten;
Within the Book of Life I know
My name has now been written.
I will not doubt, for I am free,
And Satan cannot threaten me;
There is no condemnation!

6 May Christ our intercessor be
And through His blood and merit
Read from His book that we are free
With all who life inherit.
Then we shall see Him face to face,
With all His saints in that blest place
Which He has purchased for us.

7 O Jesus Christ, do not delay,
But hasten our salvation;
We often tremble on our way
In fear and tribulation.
O hear and grant our fervent plea;
Come, mighty judge, and make us free
From death and ev’ry evil.