Congregations should have communion statements that summarize their position on closed communion. The statement can be in bulletins, on communion cards, and 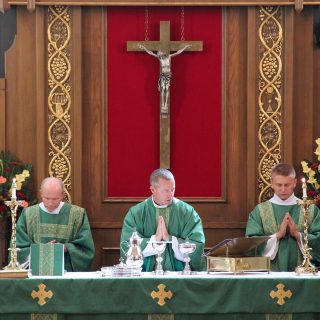 The statement should briefly tell visitors that the congregation believes that communing together is a matter of confessing the same faith and that those of different confessions should not come up expecting to receive communion. This can be expressed in various ways. However, what the communion statement must always include are instructions to speak with the pastor before the service if desiring to commune.

Church bodies have differing ideas about altar fellowship. For those church bodies that believe that nothing is distributed or received other than bread and wine, they see no reason to withhold that from visitors. There is no harm in eating and drinking a little bread and wine. Visitors from such a church may well think that they share the same confession of faith since they are Christians and come to the altar rail after reading the communion statement. They would nevertheless be eating and drinking judgment on themselves since they do not discern the body of Christ there present (I Cor. 11:29).

The Evangelical Lutheran Church in America has entered into “full communion” with many church bodies of varying confessions, many even that do not believe that the Body and Blood of Jesus are present in the Lord’s Supper. The church bodies which the ELCA are in full communion with include the Moravian Church, The Episcopal Church, Reformed Church in America, United Church of Christ, Presbyterian Church USA, and the United Methodist Church. Leaving an ELCA visitor to conclude on their own if they are in communion fellowship with a congregation in the LCMS will quite likely have an errant affirmative answer. In fact, I have never had an ELCA visitor who has thought that he should not be able to commune at our altar.

It is therefore essential that a pastor speaks with visitors who desire to receive communion. A communion statement should not be thought of as a way to skirt around the responsibility a pastor has of dispensing the mysteries faithfully, but rather as a help to him in practicing what he has promised in his ordination vows that he will do. Our pastors have after all promised in their ordination vows to perform the duties of their office in accordance with the Lutheran Confessions, which includes AC VII which addresses the right administration of the sacraments.

As Luther writes, “Because we are concerned with nurturing Christians who will still be here after we are gone, and because it is Christ’s body and blood that are given out in the Sacrament, we will not and cannot give such a Sacrament to anyone unless he is first examined regarding what he has learned from the Catechism and whether he intends to forsake the sins which he has again committed.  For we do not want to make Christ’s church into a pig pen [Matthew 7:6], letting each one come unexamined to the Sacrament as a pig to its trough. Such a church we leave to the Enthusiasts!” (“Open Letter” (para. 25), 343; WA 30/III:567.3-15, cited in J. Stephenson, The Lord’s Supper, 158.